CPAC: Ambassador David Friedman on the Importance of Jerusalem 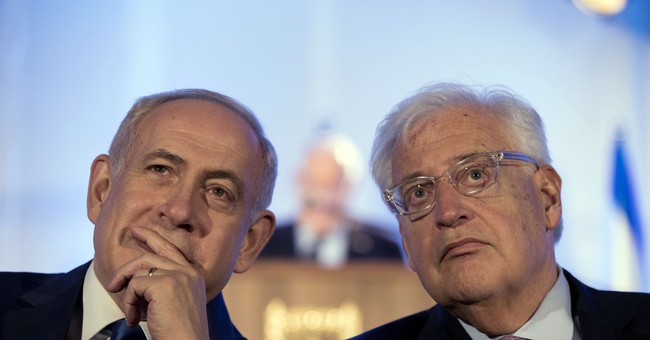 FILE – In this May 21, 2017, file photo, Israeli Prime Minister Benjamin Netanyahu, left and David Friedman, right, the new United States Ambassador to Israel attend a ceremony celebrating the 50th anniversary of the liberation and unification of Jerusalem, in front of the walls of the Old City of Jerusalem. AP sources say President Donald Trump is considering giving Friedman more authority over the U.S. outpost that handles Palestinian affairs, a shift likely to further dampen Palestinian hopes for an independent state. (Abir Sultan/Pool Photo via AP, File)

Today’s chock-full slate of speakers at CPAC (covered thus far by my colleagues Stu Cvrk and Bonchie here and here) included U.S. Ambassador to Israel, David Friedman. Friedman, a native New Yorker and bankruptcy attorney who was appointed (and confirmed following a contentious Senate hearing) to his current position in 2017, was joined by his senior adviser, Aryeh Lightstone, who moderated a discussion between Friedman and Ze’ev Orenstein of the City of David Foundation.

This discussion didn’t take place in the ballroom at CPAC, however. They spoke from a platform beside the Pool of Siloam, in the City of David, in Jerusalem. The Pool of Siloam is: “a rock-cut pool on the southern slope of the City of David, the original site of Jerusalem, located outside the walls of the Old City to the southeast. The pool was fed by the waters of the Gihon Spring, carried there by two aqueducts.”

Orenstein and Lightstone described the Pool’s discovery and spoke to its historical significance.  In 2004, a sewage pipe burst. The City of Jerusalem (being the City of Jerusalem) sent in construction crews AND archaeologists. And, as it turned out, they had inadvertently uncovered 2000-year-old steps. These were steps that lead up to the southern side of the Temple Mount — which makes sense, as those who wished to enter the temple would need to wash and purify themselves before entering.

As reported by the AP at the time of its discovery:

JERUSALEM — Archaeologists in Jerusalem have identified the remains of the Siloam Pool, where the Bible says Jesus miraculously cured a man’s blindness, researchers said Thursday — underlining a stirring link between the works of Jesus and ancient Jewish rituals.

The archaeologists are slowly digging out the pool, where water still runs, tucked away in what is now the Arab neighborhood of Silwan. It was used by Jews for ritual immersions for about 120 years until the year 70, when the Romans destroyed the Jewish Temple.

Orenstein noted that visiting the site of the Pool today is different from simply going to a museum, where you’re able to see and learn about various artifacts. Instead, when you visit the City of David and the Pool, “you can immerse yourself in the history.” More importantly, Friedman pointed out that the discovery belies any claims of the inauthenticity of Jerusalem as the capital of Israel and the shamelessness of the United Nations in continuing to deny its legitimacy a such.

Ambassador Friedman’s primary theme was the significance of Jerusalem both in relation to our history and our future. As an American and a Jew, he noted that it is the place where both of his heritages began. It is where Judaism began. And it is also the place where our Judeo-Christian values began. The unalienable rights delineated in our Declaration of Independence derive directly from the Word of God.

From a policy perspective, the spirit of Jerusalem founded our nation. As Friedman noted, John Winthrop asked for the favor of the God of Israel while en route to Massachusetts Bay Colony which he helped found. John Adams spoke of the importance of “restoring” an independent Jewish nation to Israel. In 1844, the United States established a consulate in Jerusalem.

As Friedman further noted, without Jerusalem, we are untethered to values and principles that informed our Founding Fathers. And the future of our Republic is dependent on our ability to stay true to these values.

The Ambassador noted that the United States Congress overwhelmingly voted to recognize Jerusalem as the capital of Israel in 1995 with the Jerusalem Embassy Act. And every president since pledged to move the embassy to Jerusalem but each of them ultimately neglected this statutory obligation.  President Trump’s decision to recognize Jerusalem as the capital and move the embassy fulfilled a promise to American people and showed he would stand on side of truth and history and not allow petty politics to interfere with something so fundamentally true and important to the American people. This distinguished Trump and shows that he is not someone who takes promises lightly.

Before they closed, Lightstone emphasized the instrumental role Friedman also played in making that happen. Jerusalem has been a pilgrimage site for people of many religions from all over the world, with a multitude of historical sights to see. And now, the U.S. Embassy has become one of those places – people recognize its significance and sanctity. Friedman noted, “It’s not easy to create a new shrine in Jerusalem.” In establishing our embassy there, we have.