The media is playing an interesting game. While some big names in the mainstream press are suggesting discussion of election integrity issues surrounding the 2020 election should be dismissed as conspiracy theories and “tinfoil hat stuff,” American voters, according to a Nov. 7 snap poll by YouGov, on both sides of the aisle, think fraud did, in fact, occur in the general election, but they’re divided on whether they think it was enough to affect the outcome.

Media’s latest vapors seem to be coming mostly from new allegations out of the Trump camp questioning Dominion software, promoted by Trump himself as well as an attorney Sidney Powell, who has been investigating those allegations.

Trump's old election conspiracy theory was nutty, but his new one is absolutely wild https://t.co/QbFj7aHa6t

This is the path of deranged conspiracy theory down which the outgoing President is leading his supporters and the GOP. Tinfoil hat stuff. https://t.co/UHMiUwRBCl

Despite those fairly condescending exhortations, the YouGov poll reveals some interesting data points as to whether the American voter is as convinced there’s nothing to see here. For example, this crosstab graphic shows a full two-thirds of registered voters think some voter fraud occurred in their state. 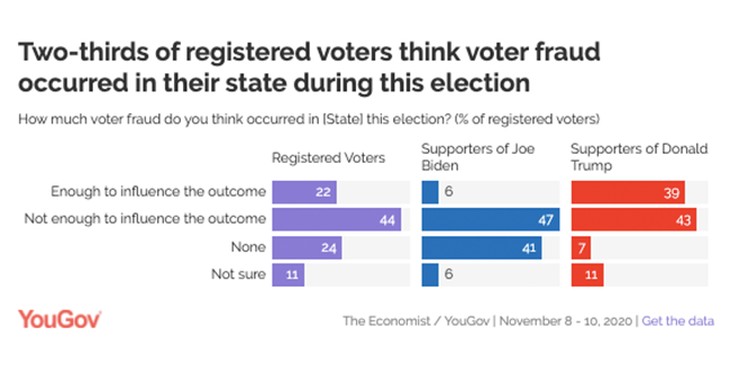 Brian Deese Spews a Pack of Lies, Gets Busted on It Big Time
Nick Arama