As per the norm, today’s White House press briefing was chock full of contentious moments between the press corps and press secretary Kayleigh McEnany, most notably over the already-answered “question” of whether or not President Trump condemns white supremacy.

Fox News chief White House correspondent John Roberts was the first to be called on by McEnany at the briefing, and he was one of several reporters to bring the issue up.

“Kayleigh, if I could start off, I’d like to ask you for a definitive and declarative statement, without ambiguity or deflection. As the person who speaks for the president, does the president denounce white supremacism, and groups that espouse it in all their forms?” Roberts inquired.

McEnany answered by noting Trump had done so multiple times over the years, including on Wednesday as well as during Tuesday’s debate:

After she cited several other examples of quotes from Trump where he unequivocally denounced white supremacist groups and racism, Roberts then asked again for her to make a “declarative statement that the president denounces it” as though she hadn’t done so already.

“I just did,” she told him several times, offering to email him a more extensive list of quotes and giving an incredulous look as Roberts continued to bizarrely gaslight on the issue and insist he just wanted to “put the issue to rest” (right).

Little did Roberts know what McEnany would have in store for him after the briefing was over.

Not long after the briefing concluded, McEnany took to the Twitter machine and destroyed Roberts, pointing out that his wife and ABC News reporter Kyra Phillips reported the day before on Trump’s answer to the question – which McEnany had also cited to him earlier during the briefing:

.@johnrobertsFox I would refer you to your wife’s reporting from 21 hours ago… accurate reporting I cited in the White House Press Briefing. https://t.co/dV3Hzp1UaI

As of this writing, Roberts has not responded to the tweet but he did have an on-air meltdown later over criticism he was getting about the question:

"And for all of you on Twitter who are hammering me for asking that question, I don't care…Stop deflecting. Stop blaming the media. I'm tired of it." pic.twitter.com/j6BDrcrj0D

I find it hard to have much sympathy for Roberts here. McEnany clearly answered the question over and over and even offered to provide for him a longer list of quotes than what she gave at the presser. And as noted above, his own wife asked Trump about the issue the day before and he gave a “declarative” answer.

Roberts can “not care” all he wants to about the criticism, but quite frankly his rant was just not a good look, especially at a time when trust in the media is at an all-time low. Nor was him asking the same question numerous times even after it had been answered the first time.

This is nothing more than a disingenuous gotcha question at this point considering all the instances where Trump has explicitly denounced racism and white supremacists. Roberts really should know better. 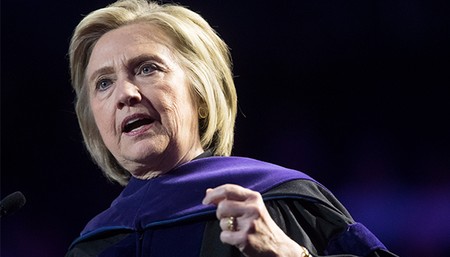 Will Voters Be Motivated by Abortion? Or Is It Just Democrats Wishcasting?
Joe Cunningham

Massive Survey Finds Americans' Views on Gender Are Shifting, But Not the Way Leftists Want
Townhall
'This RULES': Beavis and Butthead find out they have 'white privilege' and it's the funniest damn thing you'll see today (watch)
Twitchy
The White House’s Secret Meetings With BlackRock Are a Major Threat to Freedom
Redstate
After the Hot Takes on Dobbs, Who Wants to Tell the Ridiculous Ladies of 'The View' About the Bahamas?
PJ Media