Last week, the Attorney General of the United States, Merrick Garland, made a speech before personnel of the Civil Rights Division of the Department of Justice, and in it, he announced himself and the Justice Department as Democrat Party operatives.  I caution you before you start the video that watching it in its entirety will likely result in tremendous health benefits if you happen to suffer from insomnia.

His speech focused on the work of the Voting Rights Section of the Civil Rights Division, and the steps he was taking to enhance the resources and activities of the Voting Rights Section. But in doing so, he made it clear that the work of DOJ would be to advance the causes and interests of the Democrat Party for the purpose of improving its chances at the ballot box.

The speech was, in reality, a concession by the Biden Administration that HR1/S1 — the “Elect Only Democrats in Perpetuity Act” — was dead in the Senate. Garland’s speech announced that DOJ would take up a “rear guard” action to protect Democrat-supported election rigging schemes from being rolled back by state legislatures.

Garland made it clear it would be the mission of the Biden Justice Department to put a stop to all that.  Here are some of the comments that he made during his speech:

There has been a dramatic rise in legislative efforts that will make it harder for millions of citizens to cast a vote that counts.  So far this year at least 14 states have passed new laws that make it harder to vote.

And some jurisdictions, based on disinformation, have utilized abnormal post-election audit methodologies that may put the integrity of the voting process at risk and undermine public confidence in your democracy.

The Civil Rights Division has already sent a letter expressing its concern that one of those audits may violate provisions of the Civil Rights Act that require election officials to safeguard federal election records.

The Division also expressed concern that the audit may violate a provision of the Voting Rights Act that bars intimidation of voters.

The Civil Rights Division is going to need more lawyers.  Accordingly, today I am announcing that within the next 30 days we will double the Division’s enforcement staff for protecting the right to vote.

We will apply the same scrutiny to post-election audits to ensure they abide by federal statutory requirements to protect election records and to avoid intimidation of voters.

In that regard we will publish guidance explaining the civil and criminal statutes that apply to post-election audits.

And we will likewise publish guidance with respect to early voting and voting by mail.

He cited as authority for his steps Executive Order 14091, “Promoting Access to Voting,” signed by Joe Biden on March 7, 2021.

The letter from the Civil Rights Division that Garland referred to concerns the ongoing audit of the election outcome in Maricopa County, Arizona.  The letter can be found here.  It was addressed to Arizona State Senate President Karen Fann.

It was the Arizona State Senate that issued a subpoena to Maricopa County for its Nov. 2020 ballots, and then authorized a forensic audit of the ballots to determine if there are any voting irregularities revealed by the balloting.

Whenever you examine a piece of correspondence such as this, you must always pay careful attention to the exact language used because a significant amount of wordsmithing goes into the final text.

The Civil Rights Division questioned the manner in which the audit was being conducted by first focusing on whether the subcontractor is operating in an environment where the ballots and voting machines are being properly secured.  The letter refers to federal statutes that apply to the retention of all election documents that involve election contests for federal offices.  Among the statutes is 52 U.S.C. Sec. 20701 — “Retention and preservation of records and papers by officers of elections.”  The pertinent passage of that statute reads as follows:

Every officer of election shall retain and preserve, for a period of twenty-two months from the date of any general, special, or primary election of which candidates for the office of President, Vice President, presidential elector, Member of the Senate, Member of the House of Representatives …. all records and papers which come into his possession relating to [such election]…

This is where close scrutiny of language comes into play.

In questioning/challenging Arizona’s ongoing audit, the Civil Rights Division letter makes the following allegation with regard to the ballots:

The first issue relates to a number of reports suggesting that the ballots … and election materials that are the subject of the Maricopa County audit are no longer under the ultimate control of state and local elections officials, are not being adequately safeguarded by contractors at an insecure facility, and are at risk of being lost, stolen, altered, compromised or destroyed.  Federal law creates a duty to safeguard and preserve federal election records.

The statute — the federal law being referred to — says the election officials are to “retain and preserve” election materials.

They did so because the language of the letter is tied to press reports that the facility where the audit was taking place was not adequately secured.

The statute doesn’t say the records must be kept in a “secure” facility, or that they must be “safeguarded” in whatever facility they are kept.  But DOJ wants readers of the letter to think that is what the law requires, and that Arizona officials have violated that law.

If DOJ is going to allege a possible statutory violation is taking place, it could — at minimum — accurately set forth the language of the statute.

As for the issue of “voter intimidation,” the reference in the letter is to the fact that the company performing the audit included in its “work plan” the task of contacting a small number of voters by phone or in-person in specific locations if it determined from the audit that there were a high level of “anomalies” with regard to votes cast in those specific locations.  The purpose of the contact would be to confirm that the person actually cast a ballot when records showed that a ballot was cast in their name.

The Civil Rights Division letter claims that such contact with voters might constitute “voter intimidation” under the Voting Rights Act.  Section 11(b) of the VRA states:

How did the Arizona Attorney General respond to Garland’s speech and the letter? 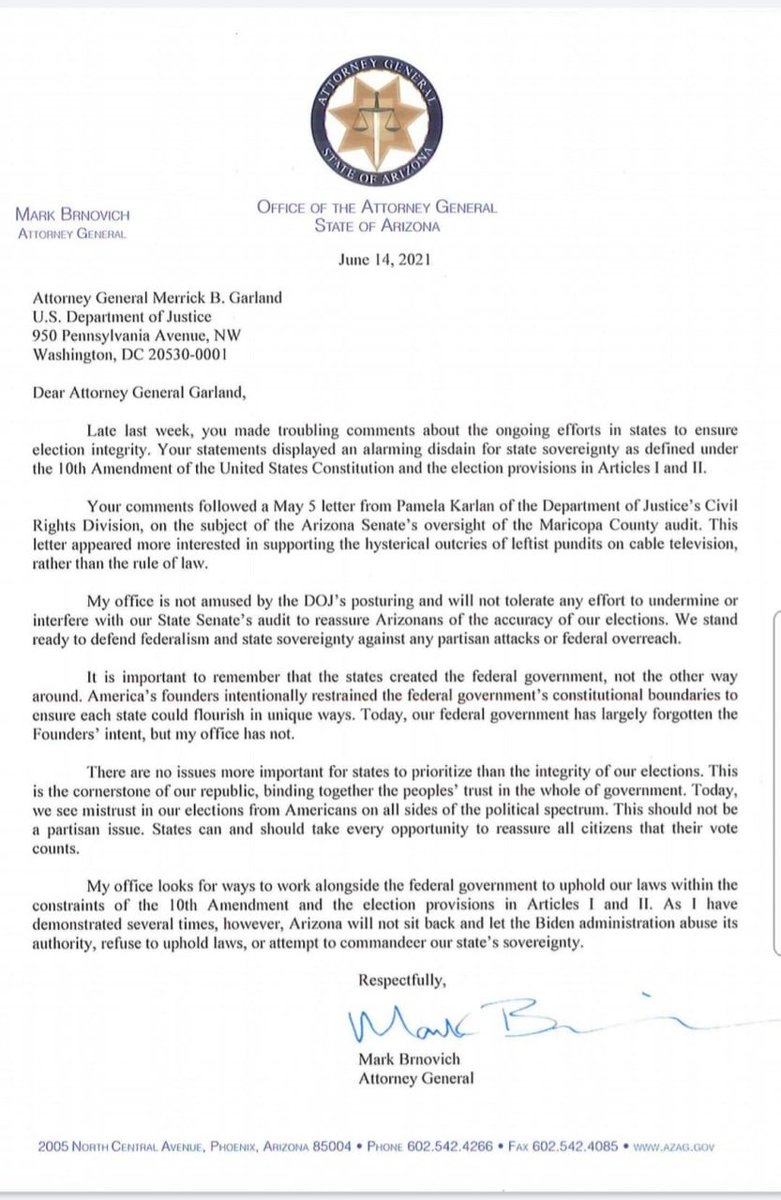 That seems to be a “line in the sand” and an invitation to DOJ to come into Arizona for a little exercise in lawfare over the issue of Arizona’s conduct of elections.

There is no question that Garland made it clear the Biden Department of Justice is going to take up the cause of the Democrat Party in pursuing electoral advantages through the courts.

If not for Pres. Trump’s ability to get dozens of new Appeals Court Justices nominated, and Mitch McConnell’s ability to get those nominees through the Senate, the very existence of the GOP as a viable political entity could have been at risk.