This is a developing story that has many significant implications, and I’ll probably end up addressing them in more than one article. This story from the Associated Press states that AG Barr confirmed today that he had actually taken this step back in October.

As an overview, I want to call attention to some of the provisions of the “Special Counsel” regulations that guide the conduct of such investigations within the jurisdiction of the Department of Justice.

The current “Special Counsel” regulations were written in the aftermath of the Starr investigation of President Bill Clinton and the “Whitewater” matter.  That investigation was conducted pursuant to a federal statute — the “Independent Counsel Act” — which created a position outside the Department of Justice, where members of the Judiciary selected the person to the position of “Independent Counsel”, and the “Report” of the investigation was produced back to that panel of judges.  Seven different “Independent Counsels” were named during the Clinton Administration, and the implications of that fact led all support for the Act to collapse when the statute expired by its own terms in 1999.  Rather than extend the statute, Congress and DOJ worked to draft the current “Special Counsel” regulations that attempt to create an “independent” investigative authority within DOJ that remains subject to the leadership of the Department of Justice – but only to the Attorney General.

Subject to the limitations in the following paragraphs, the Special Counsel shall exercise, within the scope of his or her jurisdiction, the full power and independent authority to exercise all investigative and prosecutorial functions of any United States Attorney. Except as provided in this part, the Special Counsel shall determine whether and to what extent to inform or consult with the Attorney General or others within the Department about the conduct of his or her duties and responsibilities. 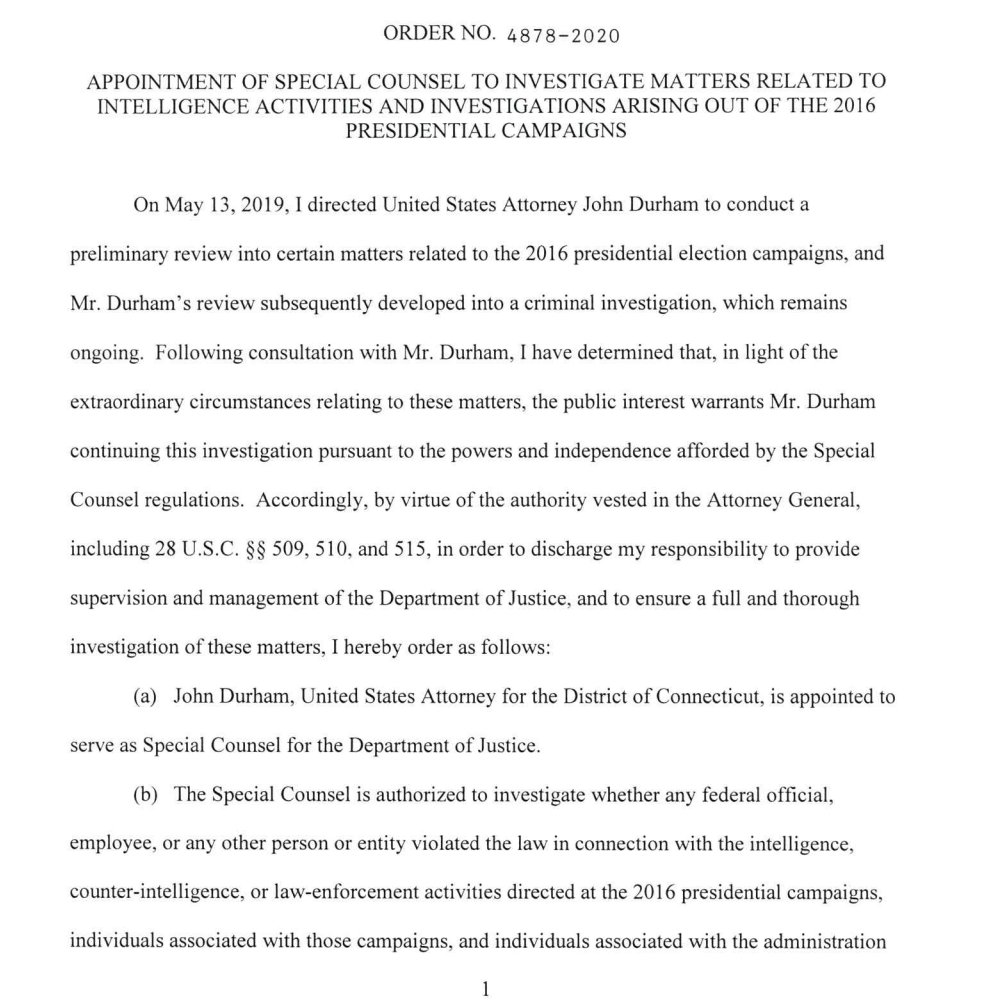 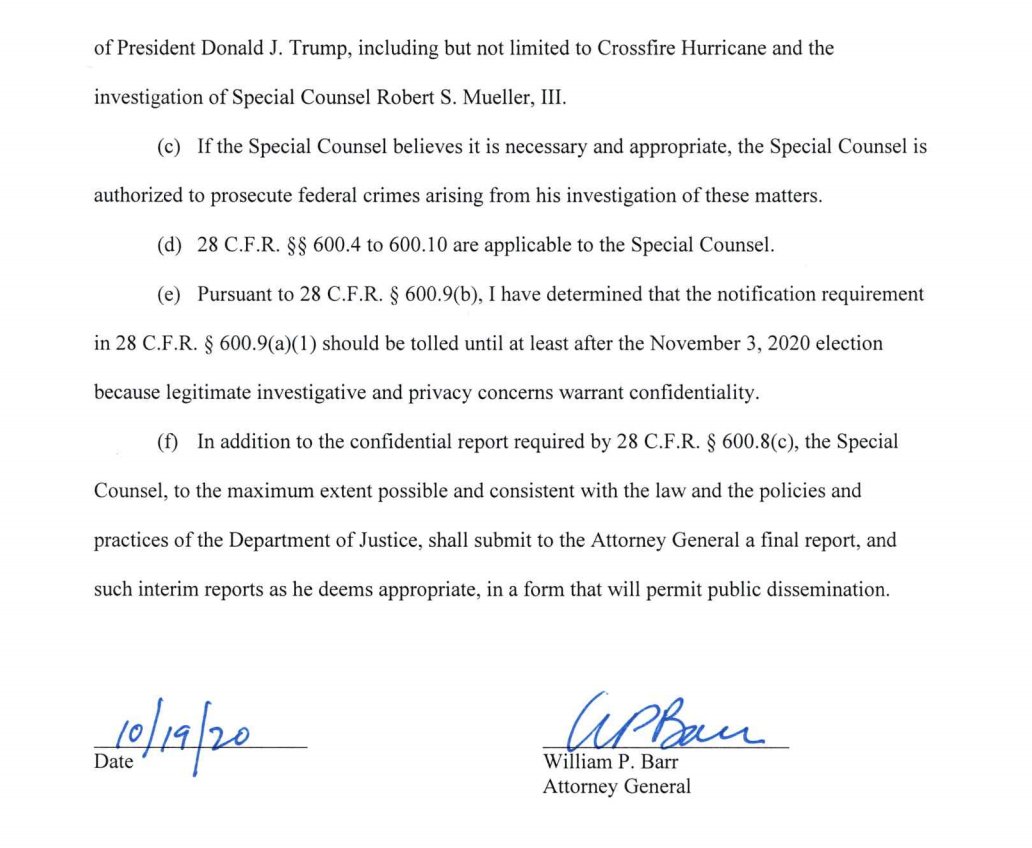 Earlier in the article, the AP reports that Barr stated that the focus of the Durham investigation started out more broadly but has narrowed to focus on FBI personnel engaged in the “Crossfire Hurricane” investigation.

Barr told The Associated Press … he had appointed U.S. Attorney John Durham as a special counsel in October under the same federal statute that governed special counsel Robert Mueller in the original Russia probe. He said Durham’s investigation has been narrowing to focus more on the conduct of FBI agents who worked on the Russia investigation, known as Crossfire Hurricane.

As noted in the article, this would seem to suggest that Durham is not focused on the “Intelligence Community” or conduct by individuals that might have pre-dated the opening of the “Crossfire Hurricane” investigation which the FBI claims took place on July 31, 2016. But the Order makes clear that Durham has the authority to pursue such aspects of the matter as part of his investigation should he see fit to do so.

The final paragraph is also interesting and lights the fuse on a potential political bombshell for any Attorney General who might come after Barr.  The Order directs Durham to prepare a final report of his investigation, as well as any interim reports he deems appropriate, and to do so in a “form that will permit public dissemination.”

The decision to release those reports to the public will be a matter left to whoever is Attorney General at the time Durham produces the reports. But the public pressure to release the Reports will be significant, and a failure to do so will be seen as a cover-up — just as would have been the case if the Mueller Report had not been released to the public.  Any Attorney General facing the question of whether to release the Report would likely need to fully take into consideration the fact that Jim Jordan will likely be the Chairman of the House Judiciary Committee beginning in January 2023.

One final issue that I’ll just briefly mention here, but will return to based on events yet to come.

This likely creates some very complicated decisions for any incoming Biden Administration in terms of selecting an Attorney General and Deputy Attorney General.  Many of the senior officials from the end of the Obama Administration will likely be required to recuse themselves from overseeing the Durham investigation if the GOP controls the Senate and the nominee wants to be confirmed.  Sally Yates has been identified as a likely pick for Attorney General, but it is difficult to see how she could ever try to sidestep the issue of whether she has a conflict of interest that requires her recusal since she had overall responsibility for supervising all DOJ components when Crossfire Hurricane was first opened.  She is at minimum a witness to the decision-making inside DOJ and the FBI.

Sen. John Kennedy Campaigns for Herschel Walker As Only He Can
Sister Toldjah

Moore to the Point - Make the Season Bright
Susie Moore

Musk Responds to Trump: 'The Constitution Is Greater Than Any President'
Bob Hoge

Elon Musk's Big Mistake
Townhall
Glenn Greenwald torches CNN's 'Twitter Files' spin: 'Like the rantings of any #Resistance maniac'
Twitchy
DeSantis Reveals His Next Fight in the COVID-19 Vaccine Battle, and It's a Big One
Redstate
The Morning Briefing: America's Lunatic Grandma Hillary Is Off Her Meds Again
PJ Media