I thought about making the headline here “The Madness of Judge Emmet”. Seems to fit.

The State of New York, among others, sued the Postal Service back in August over changes to Postal Service operations that New York claimed would lead to slower processing and longer delivery times for “mail-in” ballots in many states which expanded “vote by mail” options in response to the COVID-19 Pandemic.  The case was filed in the District of Columbia and assigned to Judge Emmet Sullivan, who also is assigned the prosecution of Gen. Michael Flynn that DOJ has been trying to get Sullivan to dismiss since May.

In an Order issued in the morning on Tuesday, Judge Sullivan gave the Postal Service until 3 p.m. ET — nearly 4 hours ago — to sweep Postal Service facilities where ballots might still remain in order to “ensure that no ballots have been held up.” The order applies to Postal Service facilities previously identified by the Court as being slow to process “mail-in” ballots – including in the battleground states of Pennsylvania, Michigan, Georgia, Texas, Florida and Arizona.

Judge Emmet Sullivan wants Postal service confirmation that it will deliver ballots in all states that have “received by” election day deadlines for mail-in votes.

Who could have ever imagined this might happen? The Postal Service maybe? It warned most states last summer that ballots should be mailed no later than one week before Election Day. It seems odd that Judge Sullivan might be surprised that some number of ballots, mailed from between 2 and 7 days prior to election day, might not get through the mail sorting system and to their intended destinations in time.

The hubris of Judge Sullivan’s demand that Postal Service Inspectors carry out his Orders with regard to his decision to step in and takeover Postal Service Operations — he’s giving orders on how operations are to take place — is par for the course for Judge Sullivan.  For him there are no rules that bound a federal district court judge’s determination to “do right.”  He knows what’s right dagnabit, and he’s not going to let anyone or anything stand in his way.

His order came in response to an update provided earlier to the Court regarding the status of mail delivery in certain locations that had been identified as potential trouble spots last week.  Here is part of what the USPS disclosed to Judge Sullivan earlier on Tuesday about its operations: 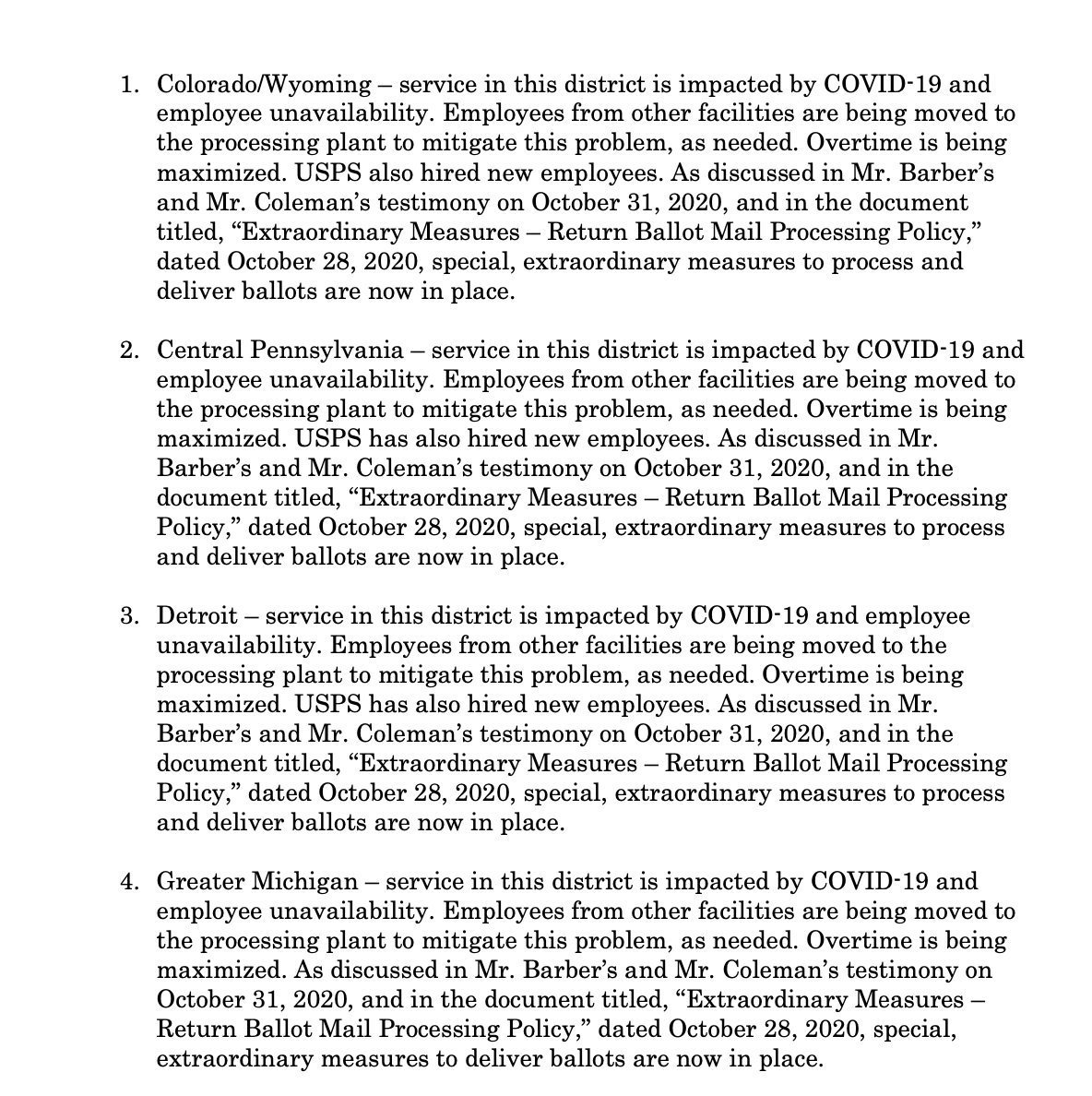 Each of those states — with the exception of Pennsylvania and Texas – have a “received by” deadline of election day at the time polls close. That means ballots still sitting in Postal Service facilities when that time arrives would not be counted under the election laws of each state as written.

During Friday’s hearing, Sullivan said the court has been overwhelmed by voicemails from people concerned about specific mail delay issues, including messages referencing a viral video of apparently abandoned mail in a post office in Miami-Dade County.

He ordered the sweep of facilities on Tuesday afternoon after the Postal Service disclosed earlier on Tuesday that delays were still happening in various locations around the country.

The idiocy of this approach is that it makes the problems created by the states and voters – mailing a ballot too late – the fault of the Postal Service in not getting the ballots to election officials on time. Judge Sullivan’s approach to the entire matter is to blame the USPS for – well, being the USPS.

Now it turns out that the USPS was not able to comply with Judge Sullivan’s Order — surprisingly, an agency with 30,000 facilities and 400,000 employees was not able to shift around personnel on a personal mission from a federal judge at the snap of his fingers.

So, the USPS wasn’t able to comply with the Court’s order in the timeframe provided by the Court because doing so would have disputed USPS operations on the last day for delivery of ballots to state election officials in some states.

Here is Judge Sullivan’s last order on the subject: 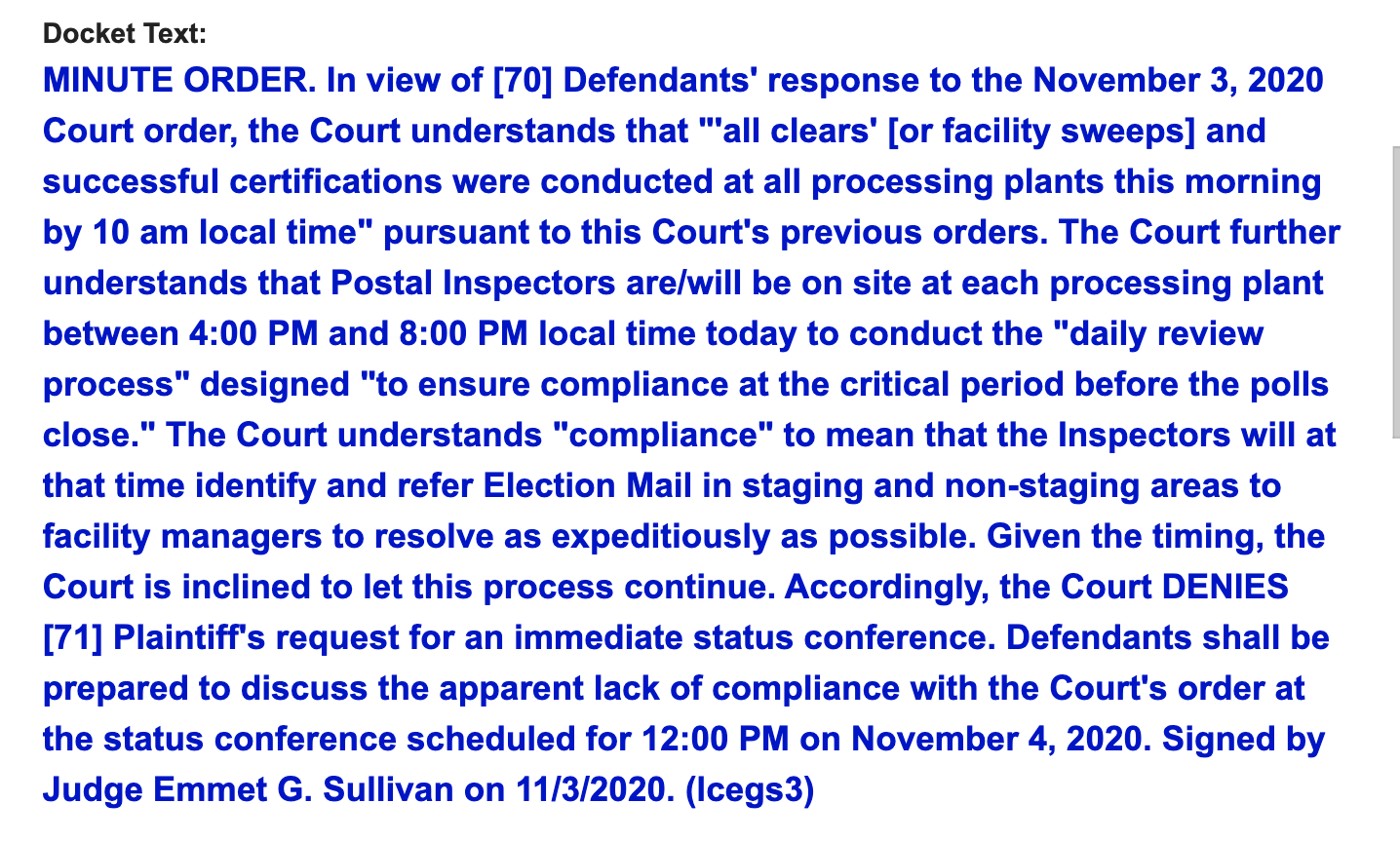 “Defendants shall be prepared to discuss the apparent lack of compliance with the Court’s order at the status conference scheduled for 12:00 PM on November 4, 2020.”

I’m guessing Judge Sullivan will be spending a few hours tonight to see if there is any law anywhere that prevents him from simply naming Joe Biden as the winner because of the failure by the Trump Administration to comply with his order.

He is a Federal District Court Judge after all.