Yesterday the Supreme Court issued a ruling denying a request for “expedited” review of the case involving the decision by the Pennsylvania Supreme Court re-writing state election law by, among other things, creating a three-day period beyond election day within which mail-in ballots can be received and counted in each County.  Pennsylvania election law statutes require all such ballots to be in the possession of election officials by 8:00 pm on election day in order for them to be counted as validly cast.

The Republican Party of Pennsylvania filed a petition with the Supreme Court to review and reverse the Pennsylvania Supreme Court’s decision, as well as a request for an emergency stay preventing the decision to go into effect during the 2020 election while the issue is pending before the Court.

By a 4-4 vote last week — prior to Justice Barrett’s confirmation — the Supreme Court declined to issue the stay.  By rule, the Court takes no action in the event of an even vote.

This past Sunday, anticipating that Justice Barrett would be confirmed on Monday, the Pennsylvania GOP filed a motion for “expedited” review of the case on the merits since the case had been fully briefed by both sides.  Yesterday, the Court denied that motion based on the simple fact that there are no enough days left before the election to reach a resolution without causing substantial disruption in Pennsylvania in terms of voter expectation and reliance on the Court’s previous decision to not grant the stay.

While Justice Alito agreed — reluctantly — that there was insufficient time on the calendar to properly decide the case on the merits, he strongly suggested that Pennsylvania authorities needed to be prepared for the possibility that the Court might overturn what the Pennsylvania Supreme Court had done.

Although the Court denies the motion to expedite, the petition for certiorari remains before us, and if it is granted, the case can then be decided under a shortened schedule. In addition, the Court’s denial of the motion to expedite is not a denial of a request for this Court to order that ballots received after election day be segregated so that if the State Supreme Court’s decision is ultimately overturned, a targeted remedy will be available.

Petitioner represents that it will apply to this Court to obtain that modest relief… and Respondent DPP agrees that such relief is appropriate.   Although the Pennsylvania Supreme Court rejected Petitioner’s request for that relief, we have been informed by the Pennsylvania Attorney General that the Secretary of the Commonwealth issued guidance today directing county boards of elections to segregate ballots received between 8:00 p.m. on November 3, 2020, and 5:00 p.m. on November 6, 2020. Nothing in the Court’s order today precludes Petitioner from applying to this Court for relief if, for some reason, it is not satisfied with the Secretary’s guidance.

Below is the letter sent to the Supreme Court by the Pennsylvania Attorney General’s Office: 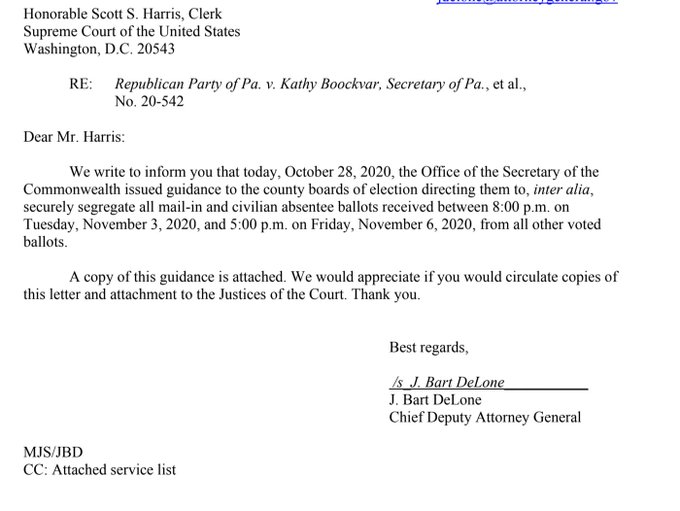 I suspect the next request made to the Court — and very likely to be granted — is that the late-arriving votes not be tabulated until after the case is resolved. The LAST thing the Court wants is for the public to know — or even the Court to know — that the outcome of the statewide race will change depending on the decision in the case as to whether the votes should be counted or not counted.

It is very likely that the Court will treat favorably any request from the North Carolina case seeking similar relief as that case remains pending in the Fourth Circuit Court of Appeals, which allowed a 9-day extension to be put in place through a settlement of a state court case entered into by the North Carolina Board of Elections which is contrary to the statutory deadline written into North Carolina election law, which does provide for a 3-day period after election day to receive mail-in ballots.  A similar segregation order for ballots received during the disputed 6-day period would seem to be in order.

Some commentators are questioning whether other legal principles would interfere with post-election challenges to counting these votes after they are cast and received.  I’ll take a look at those issues in another article later.