This is not complicated.

Last weekend, in the aftermath of the GOP Convention that ended with the spectacular events surrounding Pres. Trump’s acceptance speech, the Biden Campaign announced that he would be traveling on Monday to give a speech.  There was a clear sentiment inside the campaign that Biden had to get out of his basement in Wilmington, Delaware, and give a campaign-style speech as a form of rebuttal to the speech given by Pres. Trump.

After the events in Kenosha last week, there was only one possible topic – especially in light of the rampant media speculation that internal Biden polls showed the violence in Kenosha and elsewhere was hurting Biden’s campaign badly, and his substantial mid-summer lead going into the DNC Telethon had almost completely vanished.

But, for reasons that have not been adequately explained, the campaign announced that Biden would go to Pittsburgh — to give a speech with the benefit of a teleprompter from behind a lecturn in a nearly empty warehouse of a rehabilitated steel manufacturing plant.

Sure, Pennsylvania is a swing state that Biden almost certainly cannot afford to lose if he hopes to win 270 electoral votes.  And Western Pennsylvania is friendlier to Trump, whereas Eastern Pennsylvania is more Democrat territory, so there might be more votes to be gained there.  But why not go to Milwaukee?  That is a friendly venue — it was supposed to be the location of the DNC Convention.   Why not go to Chicago?  Kenosha lies right in between Milwaukee and Chicago.

I think the simple answer is the fact that no matter where they might have chosen to go in the areas surrounding Kenosha, they knew that Biden would not receive this kind of response:

The President has arrived. #Kenosha pic.twitter.com/XU98fBwGTf

Nor was there any chance that Biden could have participated in my discussion such as this.

The elected leaders of Kenosha County had to respond to the fact Wisconsin Governor Tony Evers had sent Pres. Trump a letter asking him to not go to Kenosha — like Trump would care what a nitwit like Evers wanted.  Here is what the Kenosha leaders had to say on the prospect of a Presidential visit: 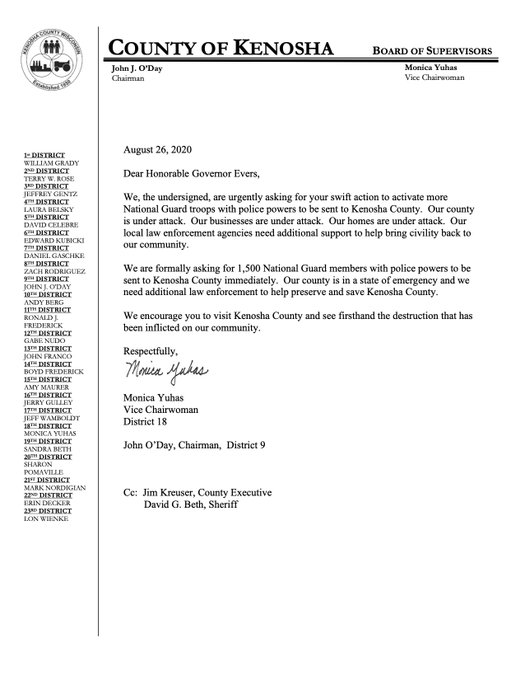 Here is the letter that Governor Evers sent to President Trump. 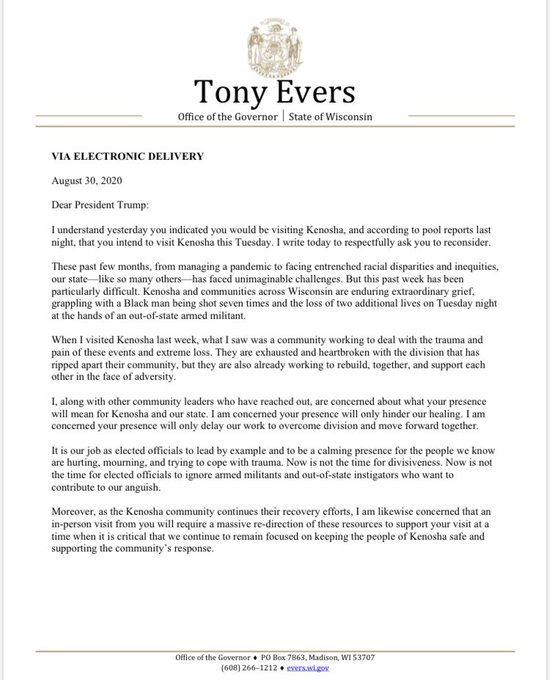 Visiting Milwaukee would have almost certainly have obligated Biden to meet with Evers, a Democrat, and would have called only greater attention to Evers’ idiotic letter — especially given the fact that local leaders from Kenosha specifically asked the President to come notwithstanding Evers’ attempt to speak on their behalf.  Any meeting between Biden and Evers would have simply called further attention to Evers’ letter, which would then be juxtaposed against the welcome Pres. Trump received in Kenosha.  It would have revealed them to both be deeply out of touch with the people of Wisconsin.

As the Milwaukee Journal reported at the time:

“We have a National Guard standing by that if the general for the National Guard needs additional help, we’re there to do it,” Meadows said. “But today, that request was denied by the governor.”

The Democratic governor deployed the National Guard to Kenosha on Monday and doubled the size of the deployment to 250 on Tuesday.

The Biden campaign knows that Evers is “radioactive” right now, subject to being second-guessed for every “decision” that he made.  Until elected in 2018, Evers for 10 years before that had served as the State Superintendent of Public School Instruction and was widely seen as a tool of the state teachers’ unions.

So, rather than take any chance on a public spectacle by being forced into a meeting with Evers, the Biden campaign had to opt for a different location.

So this is what they chose.

OMG, is this where and how Biden delivered his speech in a “rally” in “West Pennsylvania”? Why even bother to go when he was speaking to no real people? Those circles are cute though — a Chinese idiom comes to mind immediately: 划地为牢 pic.twitter.com/CmZDe3c46i

Compare that with this:

That pretty much sums up the race as of Sept. 1.