Roger Stone was prosecuted by Robert Mueller’s Special Counsel’s Office, convicted, and sentenced to 40 months in prison for, among other things, lying to Congress about the identity of his alleged intermediary with Wikileaks founder Julian Assange.

Robert Mueller testified before Congress that he was not a candidate for the position of FBI Director following the firing of Jim Comey from that position by Pres. Trump on May 7, 2017.

A memorandum written by former Deputy Attorney General Rod Rosenstein, dated May 17, 2017, time-stamped at 9:54 am, to Jody Hunt, the Chief of Staff for then Attorney General Jeff Sessions, seems to stated quite directly that Robert Mueller withdrew from consideration for the the position of FBI Director.

So, about that whole “lying to Congress” thing…..

The prior day, May 16, 2017, Mueller and Rosenstein had met with President Trump in the Oval Office.  President Trump has made the statement that Mueller was there to interview for the position of FBI Director.

Mueller was asked about this during his testimony before Congress.  Here is a transcript of that exchange: 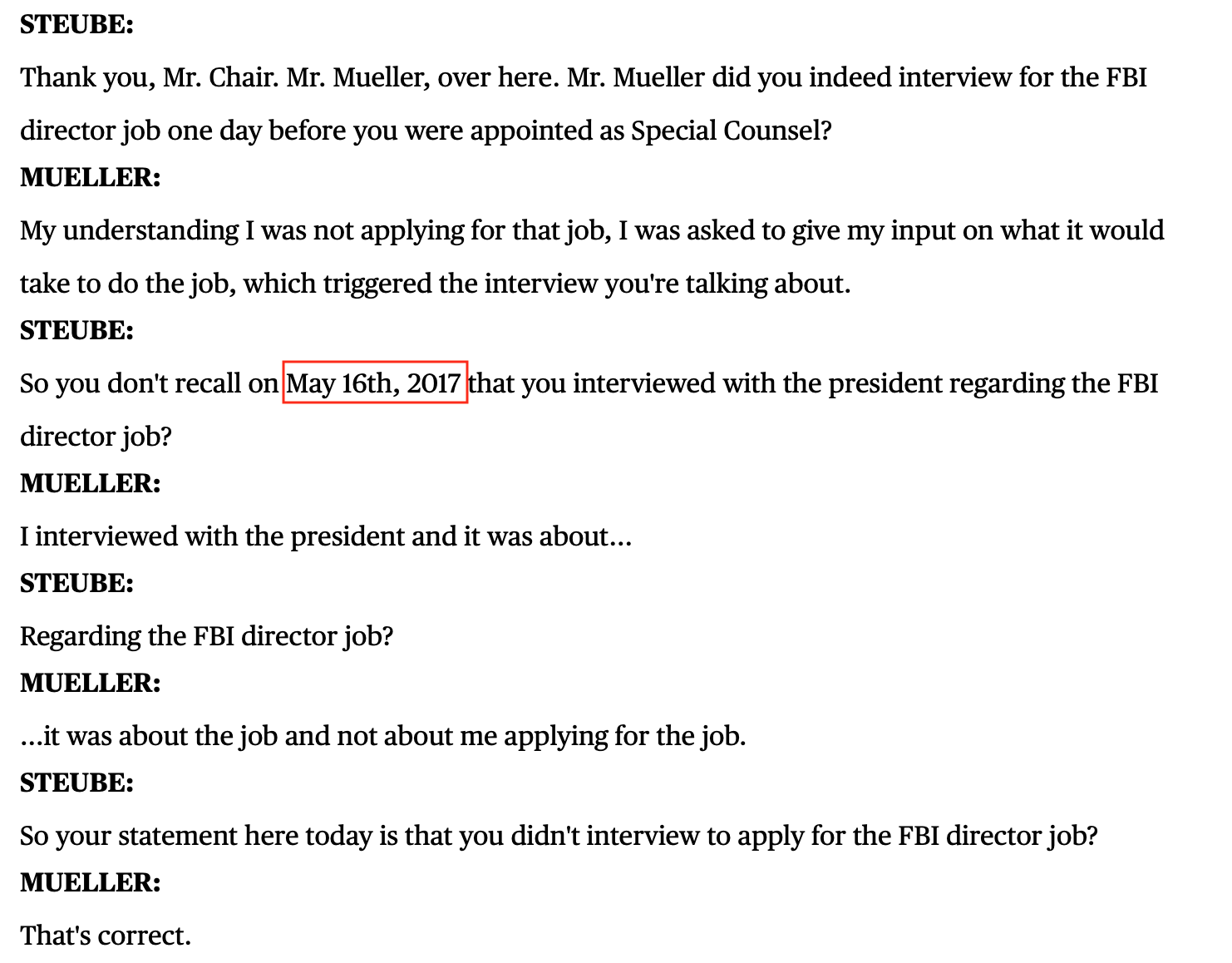 Robert Mueller:  I had not applied for and I did not interview for the FBI Director position in the Oval Office on May 16, 2017.

Rod Rosenstein:  Robert Mueller withdrew from consideration to be FBI Director on May 17, 2017.

We know about that Oval Office meeting as a result of an email between Rod Rosenstein and former DOJ Deputy Attorney General Mark Filip which happened on May 16, 2017.  In that email, Rosenstein said he was “With Mueller now.”  Rosenstein explained recently in a speech that his email had been widely misconstrued as some pledge of fealty to Mueller as of that date, when what it actually meant he was with — physically accompanying — Mueller at the moment he sent the email. They were together in the White House waiting to meet with President Trump.

Rosenstein and Mueller have a 30+ year history together.  Both were career-long members of DOJ.  But the widely unknown story is that Rosenstein’s first-ever position with DOJ — an internship — was with the US Attorney’s Office for the District of Massachusetts in the mid-1980s, and the US Attorney for that District was Robert Mueller.

It seems clear that at some point in time, Rosenstein and/or Mueller — or members of Mueller’s SCO — decided that the “optics” of Mueller being a candidate to be named by Donald Trump to again be FBI Director one day, and then taking the role of Special Counsel to investigate Donald Trump the next day — after not getting the FBI job — would cause some difficult questions to be asked about the propriety of such decision-making.

So Robert Mueller decided to not be truthful about his May 16 meeting with the President when he testified before Congress.

It is hard to envision what motivation Rod Rosentsein would have had to draft an email to Jeff Sessions’ Chief of Staff saying Mueller had withdrawn from consideration if Mueller had never applied for or interviewed for the job.   If Mueller’s testimony was true, why would Rosenstein feel the need to create a false paper trail?   It would have been better for the story IF Mueller was never under consideration because he never applied.  So nothing explains why Rosenstein would send Hunt the email announcing Mueller’s withdraw except that Mueller did actually withdraw.

So it that is true, what about his testimony before Congressional?