Earlier today I had this report on an eruption of violence in Portland in the afternoon between BLM/Antifa and “Back the Blue” groups said to include members of the right-wing group “Proud Boys.”

I noted in the story that until federal agents from the Department of Homeland Security appeared on the scene approximately an hour after the incident began, there was a noticeable lack of Portland Police in any of the videos of the two groups clashing.

Late today came an explanation for their absence — there were insufficient police resources available to the shift commanders to do anything to intervene in the incident that involved well over 100 protesters from both sides. 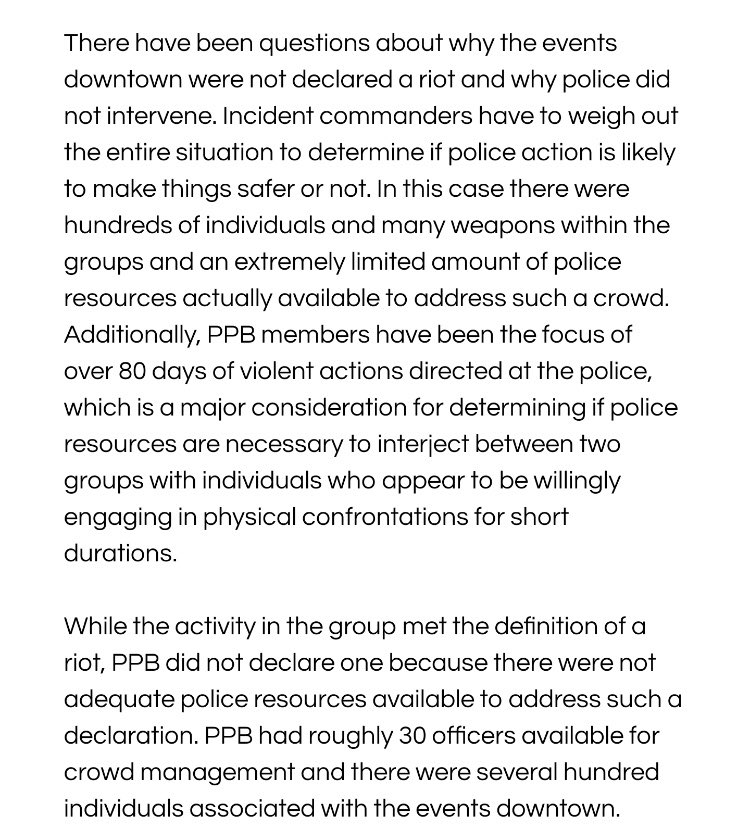 That, my friends, is the declaration by Portland PD that they are unwilling to intervene in a conflagration they do not believe they can stop.  The events of the past two months have slowly drained Portland PD’s resources through attrition of manpower.  Every night for two months has required the devotion of a hundred of more Portland PD officers for “riot control” — or at least for the past 3 weeks since the agreement with the Trump Administration to do deprive the rioters of use of the streets and parks around the federal courthouse to state attacks on that a facility.

The effort continued tonight back in Portland suburbs.  The action seemed a bit more subdued, but not entirely peaceful.

A quiet night so far I'm front of the MCSO building, after a very eventful day at the justice center. #PortlandProtests #PDXProtests #BlackLivesMatter pic.twitter.com/0pL31t3vpN

Portland Police has just declared an unlawful assembly. Protesters are ordered to disperse to the West. #PortlandProtests #PDXProtests #BlackLivesMatter pic.twitter.com/fjy1YqXKAM

Portland Police kettled the crowd & conducted multiple arrests. Protesters with no place to go began clambering over the wall and fence to leave the area. #PortlandProtests #PDXProtests #BlackLivesMatter pic.twitter.com/uS8nOpz7Mu

But if we go back to this afternoon’s clashes, we can see much more clear expressions of rage and hatred than you see in the evening clashes between rioters and police.

But here was an ominous development with the clash between the two groups — the presence of numerous firearms — both handguns and long guns. 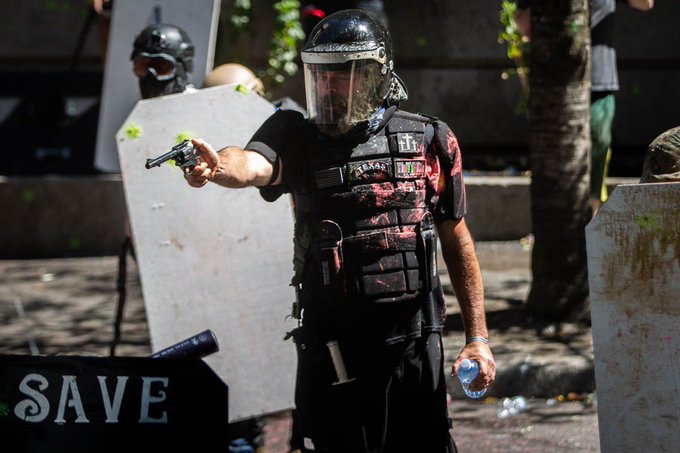 Here is a video of some “Back the Blue” supporters carrying assault-style rifles.

Multiple men with AR-15s have just arrived in support of the blue lives rally. The look to be loaded. #PortlandProtests#PDXprotests #BlackLivesMatter pic.twitter.com/ewFJrIwEKl

Oregon is a “shall issue” state with regard to permits to carry a concealed weapon.  Sheriffs in each Oregon county can issue permits that are good state-wide.

Oregon is also an “open carry” state for anyone with a CCW permit.  The combination of those two facts suggest that it is very likely we will see many many more images and photos of people at these protests — maybe even during violent clash — who are carrying weapons.

State law does allow individual cities and counties to impose some restrictions on the CCW and “Open Carry” rights, but they cannot “cancel” out either.  The City of Portland has imposed a condition on “open carry” that the handgun or long gun must be unloaded.

Who thinks the people bring their firearms to protest in Portland are keeping them unloaded?

Yeah, neither do I.

Portland PD has confessed that it is running out of the capacity to deal with violence in the city on a 24-hour basis.  There are going to be some hours during the day when insufficient police resources will be unavailable to separate the two sides.  Episodes like today are likely to repeat, maybe grow in size, and involve more weapons and greater violence employed by each against the other.

The District Attorney announced two weeks ago his office was not going to prosecute “riot” related crimes.  That caused the State Police to pull their personnel out of Portland.

It sure does not appear that the local and state authorities have a plan to turn the tide here.  This may eventually come down to a steel-cage death match that each side seems to want to have.

After today’s escalation, it might come faster than expected.