In a 5:30 pm press conference, President Trump announced FDA has issued an “Emergency Use Authorization” for treatment of COVID-19 patients with “convalescent plasma” taken from persons who have been infected with the COVID-19 virus and recovered.  FDA has found that the “known and potential benefits of the product outweigh the known and potential risks of the product.” The FDA said more than 70,000 patients had been treated convalescent plasma, made using the blood of people who have recovered from coronavirus infections.

“Today I am pleased to make a truly historic announcement in our battle against the China virus that will save countless lives. Today’s action will dramatically increase access to this treatment.”

Previously the FDA put a hold on the issuance of an impending EUA following when  National Institutes of Health Director Dr. Francis Collins, National Institute of Allergy and Infectious Diseases (NIAID) Director Dr. Anthony Fauci and Dr. H. Clifford Lane, NIAID Deputy Director stepped into the debate and claimed there was still insufficient data on the efficacy of the plasma treatment to justify an EUA.  The reversal today came after FDA reviewed additional data on the treatment, presumably to address issues raised by the three NIH Officials, and made a judgment that their concerns did not justify refusing to move ahead with the EUA while further trials and testing of the treatment continue.  While the views of the NIH Officials can be taken into consideration by FDA as it reaches a decision, in the final analysis the decision on whether to issue the EUA belongs to FDA alone.

One concern that has been expressed by the scientific community is the impact that the EUA will have on the availability of the plasma supply for further trials and research.  The EUA is expected to increase demand for the product for therapeutic purposes, and due to the fact that the product can only come from donors who have survived COVID-19 infection, the supply depends on the willingness of suitable volunteers to step forward.  Limitations on supply caused by increase therapeutic demand will likely lead to a longer time for trials with fewer enrollees.
Following the announcement, the “usual suspects” in the press all joined along in singing to the chorus of “It’s All Politics”.
Geoff Bennett, NBC News White House Correspondent:  “Questions about Trump’s convalescent plasma announcement:  Timing? Why announced on the eve of RNC?  Efficacy? Randomized clinical trials aren’t yet conclusive. Equity? How will the admin ensure the therapeutic is distributed fairly given gaps in its racial COVID data?
CNN’s Jim Acosta — surprise surprise — shouted a question at Dr. Steven Hahn as he was leaving the room about whether he had been pressured by the White House to issue the EUA after having paused the process last week.
WaPo makes as a prominent point in its story that convalescent plasma is a treatment that has been around for decades, and medical professionals do not see the FDA action as any kind of breakthrough.
AP writes that Pres. Trump called it a “breakthrough”, officials in the Administration called it “promising”, but outside experts say more study is needed before anyone celebrates.
And, right on cue, the Democrats in Congress plead for the President to let more people die while the scientists do whatever it is they do — except for the FDA scientists who are doing too much.  From the Chair of the House Select Subcommittee on Coronavirus Crisis: 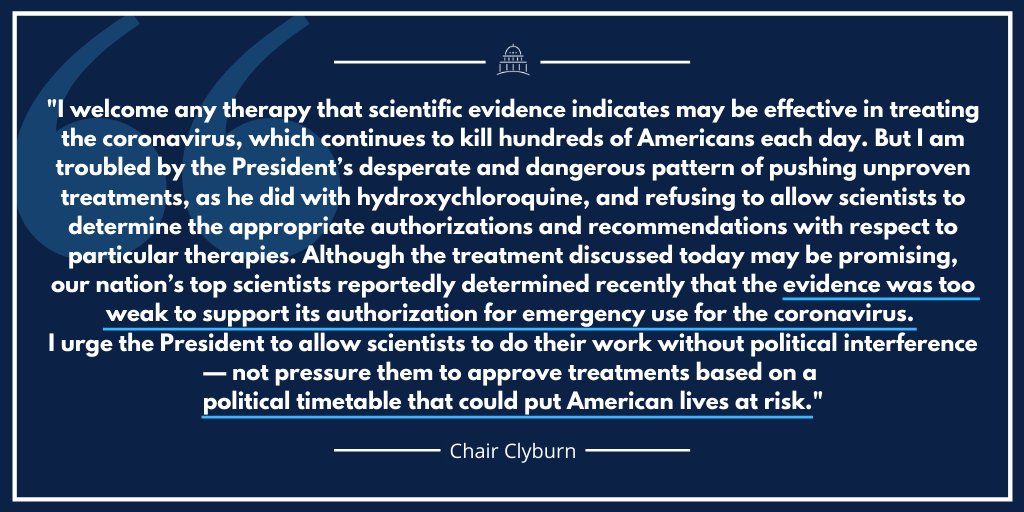 I hear that subcommittee is a good gig because it comes along with the perk of having all the Big Pharma companies dumping campaign contributions in the Member’s accounts.
“Let’s be clear: there is no great study right now regarding convalescent plasma and its therapeutic benefit in Covid-19 … Is this a miracle cure? Definitely not.” — Dr. Vin Gupta on MSNBC.
Not that impressive, admittedly, but it is late on a Sunday.  The coaches weren’t expecting to need to get the Resistance Team together on such short notice.  They were taking a short break to recharge their batteries for their coordinated and comprehensive media assault on the RNC Convention starting tomorrow.
Share
Tweet
TRENDING

Oops: J6 Committee Star Witness' Creditability About Trump Might Take a Huge Hit
Townhall
'This RULES': Beavis and Butthead find out they have 'white privilege' and it's the funniest damn thing you'll see today (watch)
Twitchy
More Implosion of Hutchinson's J6 Claims as Adam Schiff Steps in It Big Time on CNN
Redstate
Another J6 Trump 'Bombshell' Outed as a Hoax!
PJ Media