Breaking news early Sunday evening in Kenosha, Wisconsin.  The video below shows a confrontation between Kenosha Police and an adult African-American man. All that can be seen from the video at this point is the man exiting the passenger-side of the car as 3 officers have their firearms drawn.  In an agitated fashion the man walks quickly around the front of the car to the driver’s side door which he opens, as all 3 officers have their weapons pointed at him.  As he tries to enter the car, one of the three officers grabs the white t-shirt the man is wearing and attempts to keep him from entering the car.  A woman is seen in a distraught condition, and one officer moves to keep her away.  Reports are that as many as eight shots were fired.

But the Milwaukee Journal Sentinel is reporting that the man was shot, and taken by Flight-For-Life to a Milwaukee hospital.  The last reports are that he is still alive.

The newspaper describes the incident as a domestic disturbance call — with the man trying to break up a fight between two women, although that is not clear.  It is also reported that the police had first used a taser on the man but were not able to gain control of him.

Other media in the area are reporting that the shooting has created tension in the neighborhood.  A small crowd has grown larger and larger as darkness has fallen in the area. 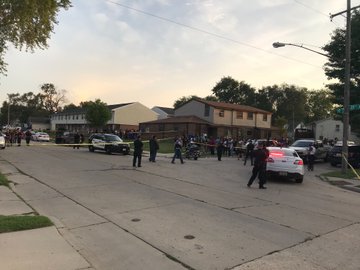 Protesters are currently at the intersection of 40th Street and 28th Avenue in Kenosha, Wisconsin where the man was shot several times by police.

Unless cooler heads prevail over the next couple hours, this could become a bigger issue as the night goes on.  Fortunately, the man is reported to still be alive.