The video out of Portland tonight is almost comical.  Rather than dutifully march down the street and “persuade through movement” the rioters to give ground and disperse, Portland PD tonight performed a full-on charge in order to get Antifa/BLM rioters running away from the scene.

Make sure you have the volume up on these videos.  Language in some of the Twitter messages is NSFW/raw.

I’m sure Mayor Ted Wheeler will get an angry letter about this one.

A lot of arrests being made on a street where there are homes on both sides.  As I noted last night, some of the neighborhood residents are making their views known with their actions in opposing the rioters. 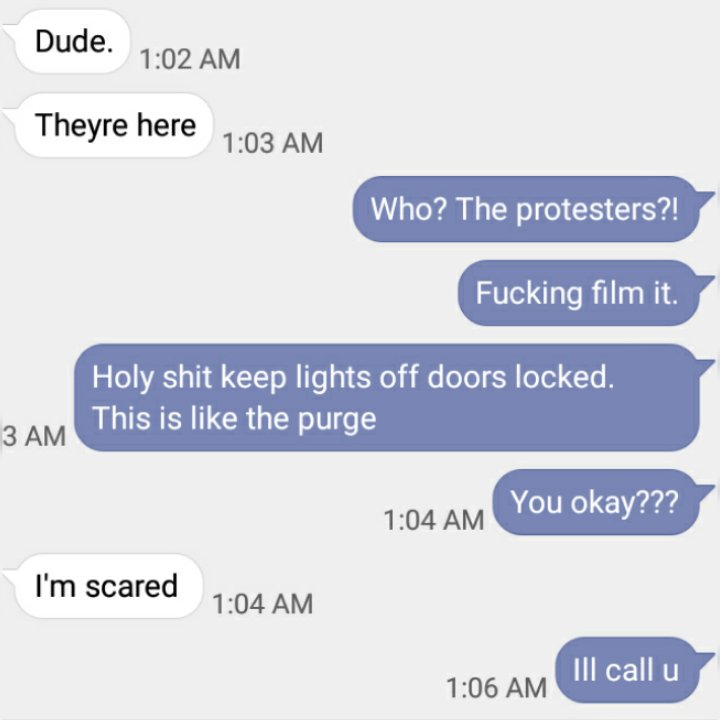 It is hard to make a definitive judgment just from the videos, but the level of kinetic force being applied by the Portland PD and Oregon State Police seems to be escalating bit by bit.  Whether that is deliberate is hard to know.

It could be a tactic intended to “persuade” some number of protesters to quit before they personally suffer an injury or arrest.

If could also be a reflection of law enforcement frustration at facing the same problems night after night.  It’s entirely likely that the feeling of frustration is compounding on an earlier sense of impotence when the political leadership of Portland was happy to stand back and allow the protesters to attack the symbols of their political opposition — the federal courthouse and federal law enforcement agents.

The US Marshal operates a fugitive apprehension task force in every judicial district which is comprised of federal, state, and local officers who work to apprehend the most dangerous fugitives in the area who have either state or federal outstanding warrants.

The Marshals are members of DOJ’s Organized Crime and Drug Enforcement Task Forces, which are heavily staffed by the more numerous state and local agents/officers.  What OCDETF means to state and local officers is better equipment and overtime pay which their state/local agencies may not be able to afford on their own.

So, I’m 100% certain the “rank and file” officers of the Portland PD and Oregon State Police were not happy being told by their political leadership to leave the federal agents to fend for themselves.

Reap what you sow Antifa/BLM.  The locals saw all that you did, and now that the politicians are unwilling to provide cover to the rioters, it’s pretty much “open season.”