At a very meaningful level part of the solution to the problems with rioters in places like Portland needs to come from the influence of adults.

Since the death of George Floyd, I’ve been struck by how much of the riot video involves young people between 20 and 30 years old — and many even younger.  My completely unscientific estimate from what I’ve watched has me believing the number must be close to 90%.

Based on my own experiences as someone who lived through that age, and has now raised children through that age, they are convinced of 1) the absolute correctness of their own worldview, and 2) they have nothing to learn from the generations that came before them.

The mother in the video below is making an effort to address both those issues with her daughter.  And she’s doing it because she cares.

Mom drags daughter out of Black Lives Matter protest. You love to see it. pic.twitter.com/L7tiSuf3V5

Here is another episode from YouTube involving a mother in Baltimore and her son protesting in full Antifa/BLM regalia:

I know people in exactly this same situation.  Parents who are distraught over their children, whom I have known since they were born, and who are out in the streets in the Pacific Northwest every night.  It’s heartbreaking to hear my friends say “We don’t even recognize our children.  They sound nothing like us with the things that come out of their mouths.  We spent 18 years trying to teach them right from wrong, and two years in a college has transformed them into young adults who I would never choose as friends.”

These are professionals — one ex-military and a federal employee, and the other a school teacher.  They live in an upper-middle class neighborhood with good schools, and provided for their kids the best they were able — in the manner they had learned from their own parents.  But for them it feels like it was all for nothing as their kids have left it all behind in favor of narcissism and anarchy because that seems “cool” and “fun”.

The university environment of the last 20 years is cleaving the current generation from the generations of their parents and grandparents.  It has taught them to hate that which came before them – things they didn’t experience but can only learn through being told by others.  The narrative they are taught in college by people who have always hated the United States as a historical institution – notwithstanding what it has given to those college educators – is that the generations that came before them need to be the targets of their wrath.  Burndown and destroy what has been built for you so that you can build something yourself with the instructions we have for you.

This might be the only way to reclaim your child.  Whether it works, in the long run, is a different matter.

I fear this is a losing battle.  The rise of social media and the grip it has on young people today is a difficult dynamic for parents to overcome.  No matter how much you spend time talking to your children, you have to battle nonsense like this from the likes of “Teen Vogue”: 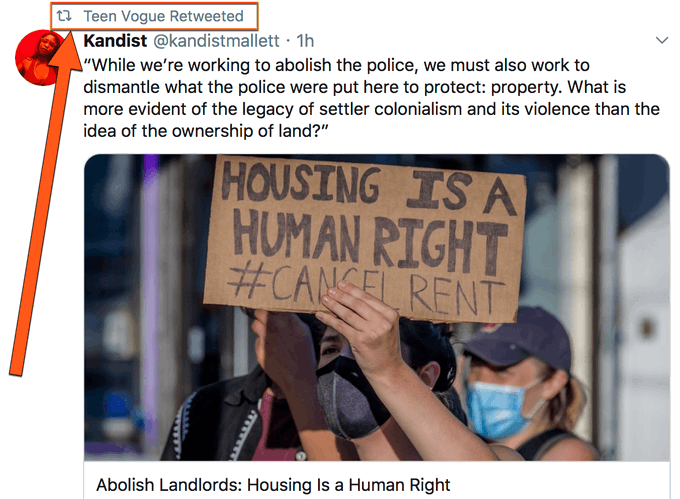 Advance is listed by Forbes as the 221st largest privately held company in the United States, with revenues in 2018 of over $4 billion.

And some moron they have running the Teen Vogue Twitter account retweets a message calling for the abolishment of private property rights because they reflect a “legacy of settler colonialism.”

Adults in the room need to take back the remote from the kids and change the channel.