As we have oft noted, the nation’s Tech Media is a perfect microcosm of the Traditional Media.  They are largely unintelligent, profoundly unoriginal and mostly hardcore Leftist.

And so it was with the California wildfires raging throughout the Golden State. 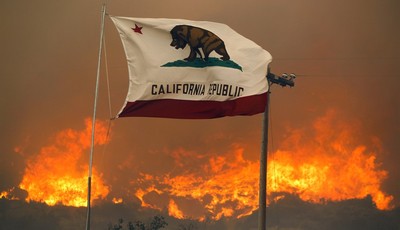 In what was almost certainly an unfortunate accident of automated technology, Verizon Wireless throttled (i.e. slowed down) the service of the Santa Clara County fire department as they are battling the blazes.

Which is nigh any network’s default reaction to mass usage by a single customer or cluster of customers.

A wireless company’s objective is to ensure the best network experience for the greatest number of people.  Having a small number of people sucking up most of the available data – is bad for the rest of us.

So companies build-in ways to auto-address this.  Like auto-slowing mass data users:

“Operators offering unlimited tariffs commonly include fair use policies restricting access after a set amount of data is consumed: in the case of the California firefighters, the limit stood at 25GB per month.…”

In case you do not understand – 25GB is a LOT of data.  Only under incredible circumstances would anyone get anywhere that level in a month.

“…The mobile equipment the department employed could consume around 10GB per day.”

So Verizon’s throttling kicked in.

Of course, Media of all Leftist stripes reacted – in identical outrage.  They all chastised Verizon.  And they used the tragic fire to all call for the titanically stupid policy known as Network Neutrality.

Leftists, after all, never want a serious crisis go to waste.  So they are playing on the devastated emotional state about the Golden State – to advance their political agenda.

“Verizon Wireless’ throttling of a fire department that uses its data services has been submitted as evidence in a lawsuit that seeks to reinstate federal net neutrality rules.”

New York Times: Verizon Throttled California Firefighters’ Internet Speeds Amid Blaze (They Were Out of Data):

“The revelations, which were first reported by Ars Technica, are buried in an addendum to a brief filed in support of 21 states and the District of Columbia, which together filed a lawsuit this year that essentially seeks to restore rules known as net neutrality. The County of Santa Clara, the Santa Clara County Central Fire Protection District and the California Public Utilities Commission are also petitioners in the lawsuit.”

Get that?  The Santa Clara firefighters who were throttled – are a party to the lawsuit to reinstate Net Neutrality.

Their Net Neutrality position – places them in the company of Leftist mass bandwidth users like Google and Netflix.

For many reasons.  Including the fact that the actual, Reality-based solution to the throttling in question – would be outlawed by Net Neutrality.

Like all mass bandwidth users, the firefighters’ union doesn’t want to have to pay more for using more bandwidth.  And they sound VERY Leftist-political in saying so:

“‘In light of our experience, County Fire believes it is likely that Verizon will continue to use the exigent nature of public safety emergencies and catastrophic events to coerce public agencies into higher-cost plans ultimately paying significantly more for mission critical service — even if that means risking harm to public safety during negotiations,’ Chief Anthony Bowden said in a sworn declaration.”

As horrible as the fires are – they do not suspend the laws of economics.

The unlimited wireless bandwidth plan I have – came with the contractual caveat that throttling could occur after certain mass usage levels.  The firefighters’ deal did too:

“We made a mistake in how we communicated with our customer about the terms of its plan,’ the (Verizon) operator stated….”

This statement seems more than a mite bizarre to me.  I think the onus for knowing the parameters of the plan – falls at least as much on the customer.  Especially a customer who relies on the service in life-or-death situations – like these firefighters.

For fear of looking like they are violating Net Neutrality – even though there are thankfully no Net Neutrality regulations in place – wireless companies have been avoiding doing anything as sensible as charging people based upon the amount of bandwidth they use.

Instead, they have tried to treat everyone neutrally.  Which places individual users like myself – and the mass-bandwidth-using Google and Netflix – under nearly-identical unlimited bandwidth plans.

And seriously – how economically stupid is that?  Very – is the answer to that question.

This means I pay MUCH more for my comparatively infinitesimal bandwidth – to subsidize the massive bandwidth use of mass bandwidth users – like Google, like Netflix…and yes, the Santa Clara County firefighters.

And seriously – how economically stupid is that?  Very – is the answer to that question, too.

The Reality-based solution to this throttling problem – is to have the mass bandwidth users pay more for their additional bandwidth.  Like everyone using more of everything else does – everywhere else in the economy.

Except Net Neutrality – would in totality outlaw this obviously-common-sense.

And seriously – how economically stupid is that?  Very – is the answer to that question as well.