Bannonfreude continues as Steve Bannon, President Donald Trump’s former campaign CEO and senior adviser, is finding it tough to find any fans even among the most MAGA-fied Trump supporters in the Sunshine State. A fundraising dinner featuring Bannon as the keynote speaker has resorted to giving away the tickets for free.

Bannon was announced as the keynote speaker for the Hillsborough County Republican Party’s Trump Anniversary Dinner this Friday, October 26th (commemorating the anniversary of Trump’s election in 2016).

The Tampa-area club had originally promoted the dinner with “Stephen K. Bannon, Former Strategist to President TRUMP” by offering tickets for sale at a range of prices from $125 for general admission, $1,000 for a VIP seating and a reception with Bannon, and a $20,000 “chairman’s table” option that included the VIP reception and ten seats at the table where Bannon himself would be seated.

Last week the prices were slashed, reported the Tampa Bay Times: VIP tickets dropped to $300, general admission to $50, the chairman’s table down to $5,000 (again, to get to eat dinner with Steve Bannon!), and $15 student tickets, with access to the speech but no meal or alcohol, were added. 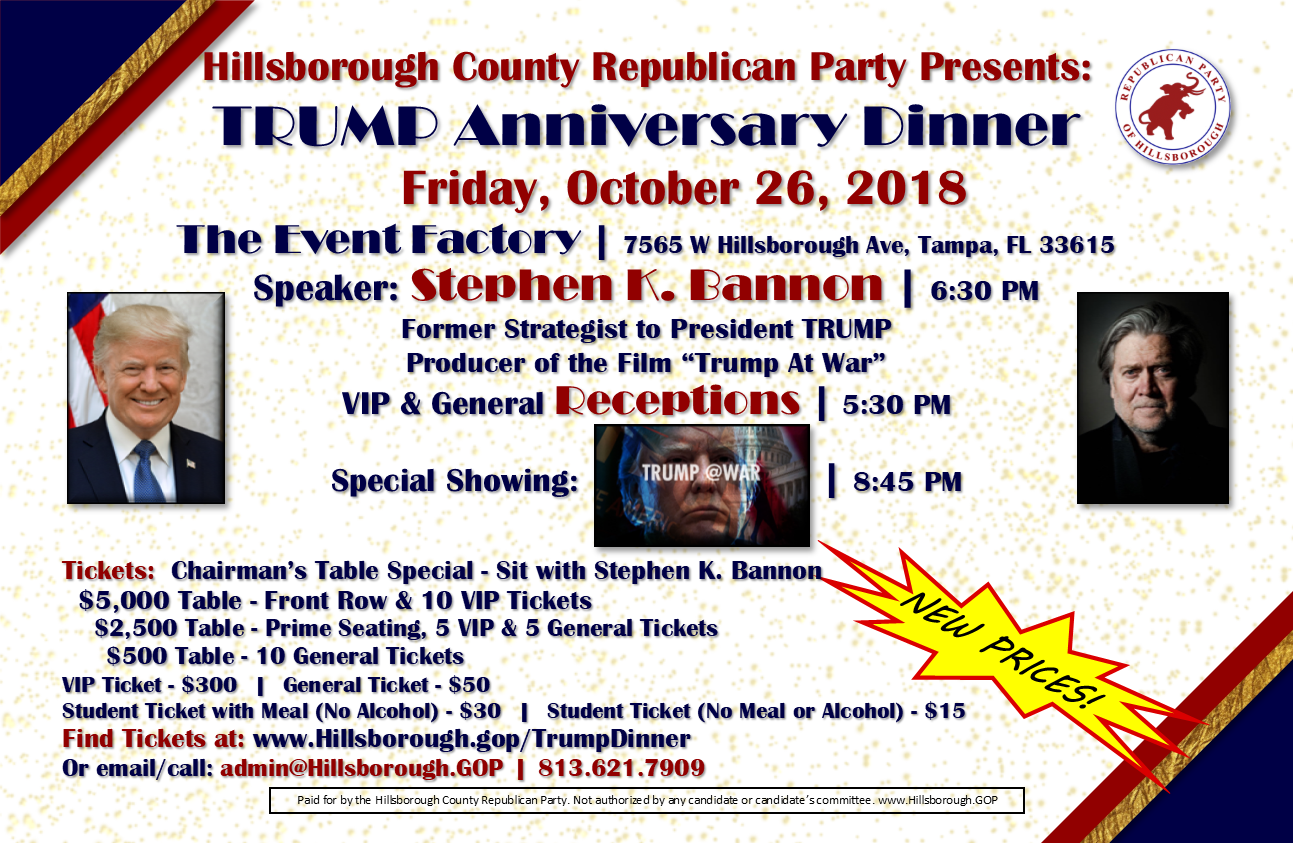 Apparently the prices were not slashed enough…the Hillsborough GOP has now announced that tickets to the dinner are now available for free.

According to the Tampa Bay Times, Hillsborough GOP vice chairman Jeff Lukens emailed party members yesterday to say, “The Trump Anniversary Dinner with Steve Bannon this Friday will be COMPLEMENTARY TO ALL. We have a donor who will cover our expenses.”

The mysterious “donor” has not been identified, and Lukens did not respond to the Times‘ inquiry about who it might be.

Giving away free tickets is an unusual strategy for what is supposed to be a fundraising dinner. The county Republican Parties have held fundraising dinners like this for years, to energize their candidates and volunteers for upcoming elections and to raise operating funds, often under the banner of celebrating “Reagan Day” or “Lincoln Day,” two of the most popular Republican Presidents.

The whole point of these dinners is to raise money. If the Hillsborough GOP has a generous donor who can underwrite the cost of Friday’s entire dinner (food, drinks, renting the event space, staffing, etc.), then isn’t that a check the party could have otherwise had if they had been able to get a speaker who more people wanted to see?

Bannon was once lauded as Trump’s “Svengali,” viewed as a mastermind schemer who was referred to as “President Bannon” in multiple media reports, and not entirely tongue-in-cheek. But then his fall from grace was brutal and widespread in its devastation: Trump excommunicated him from the White House, Breitbart News ousted him, Sirius XM dropped his show, and even Fox News Channel told him he couldn’t sit with them.

It probably shouldn’t be much of a surprise that Tampa-area Republicans — still a stronghold for Trump supporters — were less than enthusiastic about paying money to hear from Bannon.

Said one former Breitbart employee who asked to remain anonymous: “They used to pay me to listen to him — but even then I seldom paid attention.”