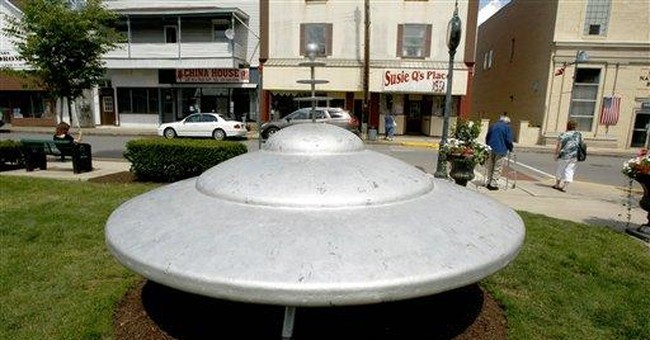 In this photo made on July 7, 2009, a novelty flying saucer sits in the minipark at the center of Mars, Pa.. Forty years after Neil Armstrong first set foot on the moon, space occupies a very different place in the popular culture. (AP Photo/Keith Srakocic)

So here is President Underwood being his usual Machiavellian self, presiding over a happy and prosperous nation when literally out of the blue, humongous flying saucers arrive and station themselves over virtually all of humanity’s iconic structures: the White House, the Eiffel Tower, the Taj Mahal, the original In-N-Out in Baldwin Park, and so on.

The military is concerned that the spaceships represent an unfathomable threat. They convince President Underwood and his wife to vacate the White House for an undisclosed location almost a mile underground. And a good thing, too, because no sooner do Frank and Claire put away their toothbrushes than all the spaceships, all around the world, simultaneously unleash directed energy weapons at humanity’s treasures, turning them into white hot plasma, while killing millions of people.

Because this is a movie, you know that in the end, humanity is going to win. So this could be the heroic struggle of the human race to overcome incredible odds and survive in the face of a truly horrifying enemy.

But it isn’t. This is a fictional Kevin Spacey movie. And he’s more into politics than science fiction.

The trouble starts at the first press conference after it’s clear that the aliens are not our friends. “Mr. President,” came the first question, “in 1952 the astronomer Carl Sagan warned the government that extraterrestrial beings might pay a visit to Earth any day, and they could well be hostile. Why was your Administration so unprepared?”

Things went downhill from there. The aliens next unleashed what seemed to be fleets of invisible flying machines that would shoot death rays at anything that moved. No one could see or hear these machines, but virtually anyone who ventured outside would be struck dead almost instantly. President Underwood urged everyone to remain in their homes, and most complied since the invisible alien death ships seemed to be everywhere. Well, everyone stayed inside except Sammy Garbanzo of Petaluma, California. Sammy was a paranoid schizophrenic who rarely did venture out of his apartment because he was convinced that CIA snipers were on the roofs of all the buildings. But on this particular day he ran out of Skittles and so he walked down to the Seven-Eleven to buy some. The neighbors watched in horror as Sammy made his way down the street. Sure enough, he didn’t get far before he was struck by a death ray. But he kept going. And then he got hit by two death rays, and then three. They bounced right off of him. Sammy bought his Skittles and walked right home, death rays all around.

That was how humanity discovered that alien death rays would bounce off a tin-foil hat. Sammy always wore one outside, to keep the government’s mind control beams from getting into his brain from the satellites. Purely by accident, he had found a way for humans to move about outside without getting killed.

The problem was, tin-foil hats were pretty much a novelty item, sold only in costume and party stores. The annual production of tin-foil hats wasn’t even five thousand units. In spite of which, President Underwood scheduled a press conference to announce this major finding and advance that would permit near-normal activities even as alien death ships circled overhead. Once again, the press conference was a disaster. Congressmen, briefed in advance, were already asking why the Underwood Administration did not have hundreds of millions of tin-foil hats stockpiled to protect the American people from invisible death rays, especially since the government had been warned about attacks from space aliens many times. The opposition party warned citizens that tin-foil hats might prove poisonous if children or pets consumed them. And David Muir on the ABC News interviewed a woman in Arizona who was blinded by the reflection from a tin-foil hat in the noonday Sun.

With his popularity cratering, President Underwood turned to his scientists and engineers, hoping there might be some progress toward ridding the Earth of these Abominable Aliens. And indeed there was. “Remember the Coronavirus that hit during the Trump Administration? Most humans who contracted that survived. Not so with the space aliens. We sprayed it on some of the aliens we’ve had confined at Area 51. Every one of them keeled over and died within the hour. We think we can spray some virus on one of the flying saucers; that will take it back to the mother ship and infect the lot of them.” Underwood approved the plan immediately.

In this way the Earth was saved from attack by killer space aliens and their death rays. With flying saucers dropping out of the skies, and leathery dying aliens crawling out coughing and wheezing, Underwood expected to be hailed as the savior of humanity. No such luck. The very next day, the opposition party filed impeachment proceedings against Underwood. In approving the plan to infect the aliens with coronavirus, Underwood had failed to file the form in triplicate, as required by 21 CFR 1305, Subpart B.