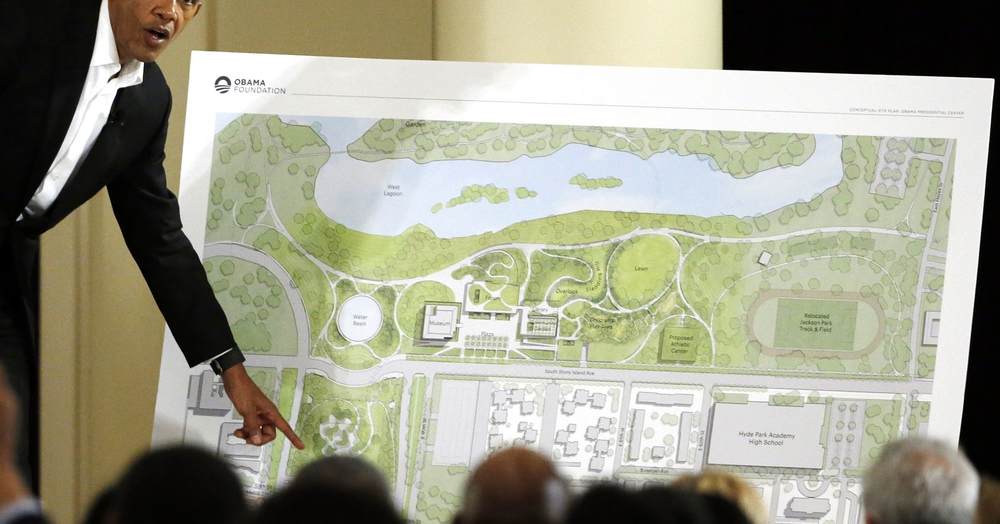 Who could’ve seen this coming? Mister Regulation’s own site for his south side Chicago presidential library has been hit by a federal lawsuit from a local environmental interest group.

Protect Our Parks Inc. is attempting to restrict the Obama Presidential Center from being built on an area of public parklands, calling the move an “institutional bait and switch” by organizers. Protect Our Parks says the City of Chicago and the Park District are trying to lease the public land for a nominal price, which the group claims they do not have the authority to do.

The lawsuit, which also names three Chicago-area residents as plaintiffs, argues that such a maneuver would violate state law and represents “a short con shell game, a corrupt scheme to deceive and seemingly legitimize an illegal land grab.”

In Chicago? Corruption? You don’t say.

“The City and Park District clearly realize and fully understand that this established law precludes the Park District from arbitrarily transferring possession, use and control of this dedicated ‘open, clear and free’ public parkland in Jackson Park to a private nongovernmental … entity’s self-determined use,” the complaint says.

The plaintiffs accuse the Obamas of committing an about-face on original plans for the Jackson Park site to be home to a national presidential library that would hold historic documents and archives from Barack Obama’s presidency under the National Archives and Records Administration’s supervision.

Protect Our Parks is the lesser known conservation group in the Chicago area compared to the Friends of the Parks that won a battle to keep the Lucas Museum of Narrative Art from building along Soldier Field’s lakefront.

Their reasoning? Partially for financial reasons, but also because the group doesn’t want to go up against Obama in the city that brought him to prominence.

Friends of the Parks did come out in support of keeping the Obama Center from building on public lands while they support the center being built in the area.

“Friends of the Parks has always said that we welcome the Obama Presidential Center to Chicago’s South Side but disagree with the choice to locate it on public parkland rather than vacant land across the street from Washington Park,” Juanita Irizarry, executive director of Friends of the Parks, said in a statement Monday. “While we are not involved with this lawsuit in any way, it is an indication of the fact the Friends of the Parks is not alone in our concern about Chicago’s parks being seen as sites for real estate development.”

Some people might find this surprising, but given Obama’s propensity for doing things “the Chicago way,” it’s to be expected.