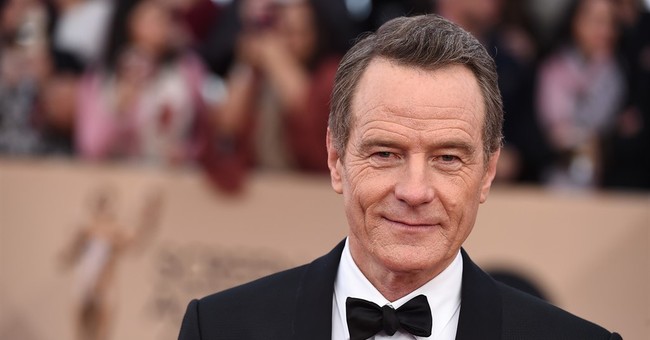 told The Hollywood Reporter that “President Trump is not the person who I wanted to be in that office, and I’ve been very open about that. That being said, he is the president.”

He added, “If he fails, the country is in jeopardy. It would be egotistical for anyone to say, ‘I hope he fails. To that person I would say, f— you. Why would you want that? So you can be right?”

Except as we know from the advent of #TheResistence movement to the invocation of the “i” word — impeachment — from day one of Trump’s presidency, there are many, many Americans who hope for exactly that.

Cranston was a Hillary Clinton supporter in 2016 and even went so far as to say he would consider moving out of the country if Trump won the presidency just days before the election.

But Cranston has accepted Trump is president — a reality both those on the no-fan-of-Trump right and the left have had to come to terms with — and says regardless of party affiliation, we should all recognize the good along with the bad of Trump’s presidency.

“I don’t care if you’re a Republican and I’m a Democrat or whatever, I don’t care. A good idea’s a good idea. Let’s do that,” Cranston said in the Monday interview. “We’ve got to get away from this idea that our country is political football, and someone with a different opinion is the enemy. Assume they love this country as much as you do, and there’s always room for improvement. How can we make it better?”

Actress Nicole Kidman, who is an American citizen by birth, has expressed similar sentiments earlier this year.

Kidman said people need to accept Trump is president and get back to work on the things that really matter. For Kidman that is being an advocate against domestic abuse.

I agree with both Kidman and Cranston. Trump is president and putting so much energy behind either not accepting that fact, or throwing $10 million on ridiculous ad campaigns insisting on impeachment or bust, is counterintuitive.