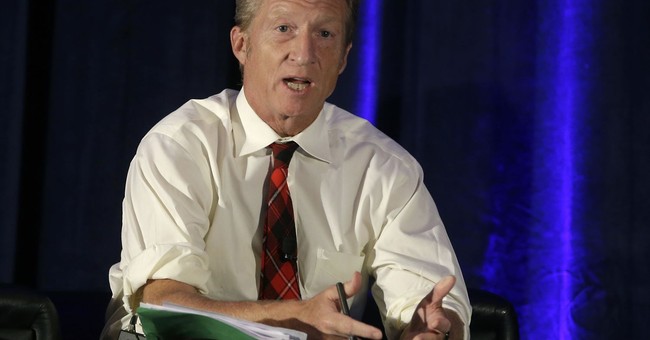 Billionaire Democratic Party fundraiser Tom Steyer, a man who insists on throwing good money after bad, is at it again. This time with a new ad campaign aimed at getting people to sign a petition in support of impeaching the president.

Steyer’s commercial is the earnest handwringing we’ve seen from much of the left over the past 11 months.

Steyer says in the ad:

He’s brought us to the brink of nuclear war. Obstructed justice at the FBI. And in direct violation of the Constitution, he’s taken money from foreign governments and threatened to shut down news organizations that report the truth. If this is not a case for impeaching and removing a dangerous president, then what has our government become?

Join us and tell your member of Congress that they have a moral responsibility to stop doing what’s political and start doing what’s right. Our country depends on it.

The brink of nuclear war? Hyperbole much? All of the claims Steyer makes are talking points that have either not been founded with certainty or aren’t impeachable offenses.

Impeachment is a political act, and yet Steyer is asking viewers to ask their congressperson to stop being so political and start doing what’s “right.”

Has the man been to Washington, D.C.? Doing what’s right is way down the list of political priorities.

Steyer’s reasons for appealing to the public to sound the impeachment alarm amusingly could’ve also been applied as easily to Hillary Clinton had she won.

North Korea would still be on their march to annihilation. Comey would likely still be out of a job today. If Hillary Clinton hasn’t taken payments from foreign governments, then I’m the Queen of England.

And if you think a Hillary Clinton administration wouldn’t do all it could to shut down certain media outlets I have some beach front property in the Mojave to tell you about.

Someone should also tell Steyer that impeachment and removal from office are not the same thing. No president has ever been successfully removed from the presidency after being impeached. Bill Clinton and Andrew Jackson were both acquitted following impeachment. Nixon resigned before suffering the possible disgrace of a removal.

One last point Steyer and his ilk seem to forget is who will assume office if and when they were actually successful in removing Trump.

Does “President Mike Pence” sound better to the left? Pfft. Not even close. Conservatives, myself included, would be ecstatic over such a turn of events despite any ire Pence has garnered before and after his ascension to the vice presidency.

Once again, Tom Steyer has chosen an idiotic and laughable concern campaign to throw $10 million at. I’d complain, but it’s his money and if he wants to waste it on dumb ways Trump and Republicans can eventually use as ammunition in 2018 and 2020, be my guest.

It’s less money the man has to allocate to losing elections in states like mine.

Follow Up: If Candace Owens Had Done This, Blexit Would Have Been More Than A Fantasy
Jeff Charles

While Posturing Like They Are Above it All Journalists Use Dr. Seuss as a Cultural Cudgel
Brad Slager

Report: Biden Admin Releases At Least Part of $6 Billion to Iran That Had Been Frozen by Sanctions to Iran
Nick Arama

Was the Maj Toure Panel “Too Much Blackness” for the Folks at CPAC?
Lenny McAllister

Biden Signs Executive Order Aimed at Expanding 'Voter Access'
Townhall
OMG-LOL! Receipt-filled thread mocking #BlueAnon for each and every CRAZY conspiracy theory on the Left is an EPIC must-read
Twitchy
Joe Biden's Handlers Let Him Out, and Things Are Not Fine
Redstate
Our Collapsing Culture: How 'The Church of Woke' Upends Language and Ends Debate
PJ Media