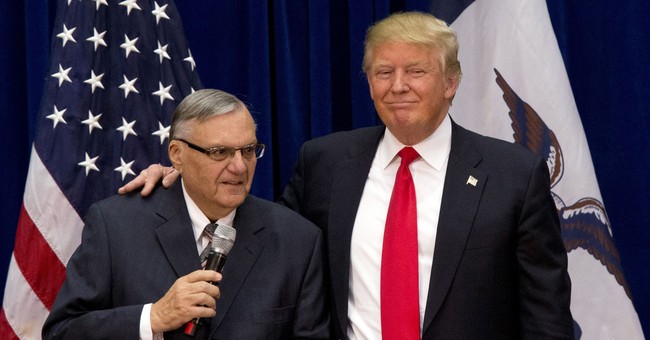 Of all the asinine issues for President Trump to stick his oar in about at this particular time, few could top a potential pardoning of former Maricopa County Sheriff Joe Arpaio.

Arpaio was convicted of criminal contempt of court for carrying on his targeted patrols aiming to catch illegal aliens in his Arizona jurisdiction. Arpaio acknowledged he continued the patrols in 2011, but said he wasn’t advised properly by legal counsel.

According to reports, Trump has taken a further step toward pardoning Arpaio:

The White House has prepared the paperwork for President Trump to pardon former sheriff Joe Arpaio when he makes the final decision to do so, CNN has learned.

An administration official said the White House has also prepared talking points to send to surrogates after he is pardoned.
One of the talking points is that Arpaio served his country for 50 years in the military, the Drug Enforcement Administration and as Arizona’s Maricopa County sheriff, and that it is not appropriate to send him to prison for “enforcing the law” and “working to keep people safe.”

While Arpaio has been convicted and could face up to six months in jail, he won’t be sentenced until early October. Additionally, because he has no prior arrests or convictions legal experts say the likelihood the 85-year-old will spend any time behind bars is small.

Trump makes no bones about valuing blind loyalty to himself from others and those who kiss the ring will be rewarded. Arpaio said last week he would never expect a favor from Trump, especially if it would create controversy. But there are seemingly few things our president loves more than controversy so, of course, he’s going full speed ahead.

Pardoning Arpaio will make his Fox News base happy and anger those who already don’t like him. The two things that motivate 99 percent of what Trump does.

However, while it’s certainly in Trump’s purview as president to pardon whomever he pleases, often having the power to do something and actually doing it can be the difference between a leader who serves the people and one who controls them.