[promoted from the diaries]

On Thursday, a friend and I made the trip to downtown Cleveland to check out the #OccupyCleveland protest. The Facebook page predicted there would be 800-ish people attending, but the actual number on opening day was closer to 200.  We dressed to blend in with the crowd so we could fully embrace the experience, spending the better part of the day with the protesters.

The first thing we noticed was that this event was barely planned. #OccupyCleveland had a few individuals who appeared to be coordinating the day’s events, but it was clear there was no schedule and there was no real preparation for the adult pajama party that was supposed to happen that night.

As we eavesdropped on conversations and asked around, we discovered that the coordinators were unsure about whether they would be permitted to camp at the park – they were negotiating most of the day with City of Cleveland officials and City Council members.  In the end, the best deal they could get was permission to sleep on the sidewalks as long as they weren’t blocking any walkways or businesses.

To their credit, they were very intent upon obeying the laws and respecting law enforcement. They emphasized that law enforcement officials were part of the 99%.  Well, for now, anyway. There were warnings from the leaders about what might happen if anyone so much as stepped outside a crosswalk.

There was no food supply planned except for a small stash they were giving away after the first hour. They were Tweeting throughout the day that they were accepting food  donations. We were grateful for our free Anarchist Apples and Che Cheetos and lounged around on a blanket for an impromptu picnic with the rest of the slackers.  The only restroom facilities available were in the Federal building across the street. We were told they “had to let us in” as long as we had an ID. However, after hours, they will be left without running water or toilets. Lake Erie’s a half mile away, so maybe that’s the plan?

We sat in on the Tech Team meeting and discovered that although they had plans for a cell phone charging station, they realized they had no source of electricity and city ordinances prohibited them from having electric generators in the park. Plus they didn’t have extension cords. Oopsies.

It was a mostly white, age-diverse crowd. The reality is that there were two completely different protests occurring simultaneously. Check out the bipolar selection of photos below: 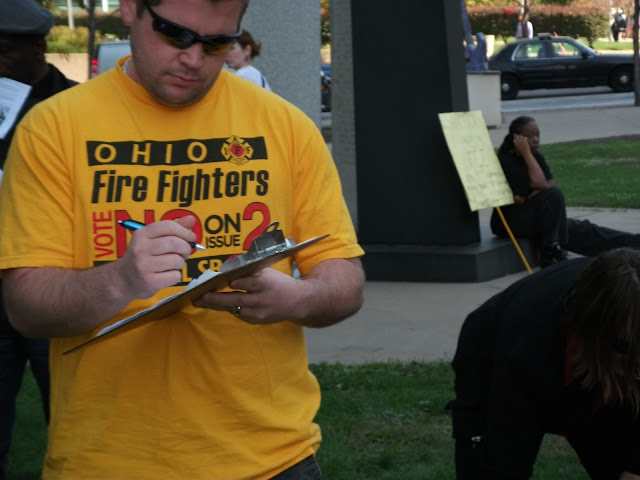 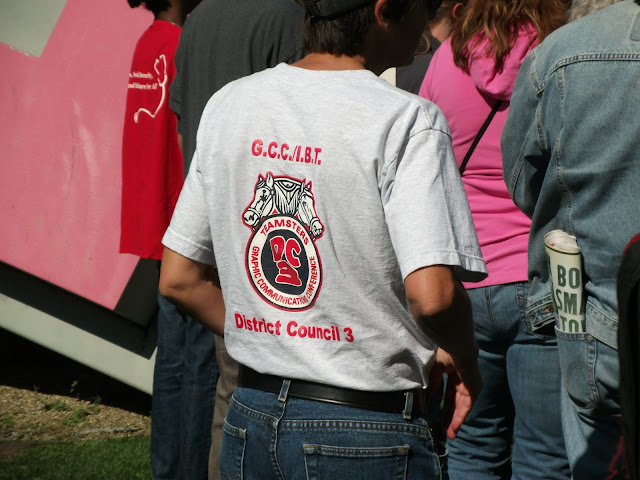 As you can see, the unions were well-represented at this protest.  Rather than young, disaffected college students, the featured speakers were from the traditional arms of the Democratic Party. There was a woman from the SEIU, who called herself a Community Organizer. There was someone from the AFL-CIO and a representative from Rep. Dennis Kucinich’s office. There was an activists urging protesters to vote against Issue 2 (Gov. Kasich’s union reform bill, which the unions are trying to repeal) and against Issue 3 (the Healthcare Freedom Amendment). Someone also urged us to sign the petitions being circulated to put a measure on the ballot to repeal the recent election reform laws passed by the GOP-controlled legislature. We were approached several times by various people circulating these petitions.

And of course, what protest (of any kind) would be complete without this guy?: 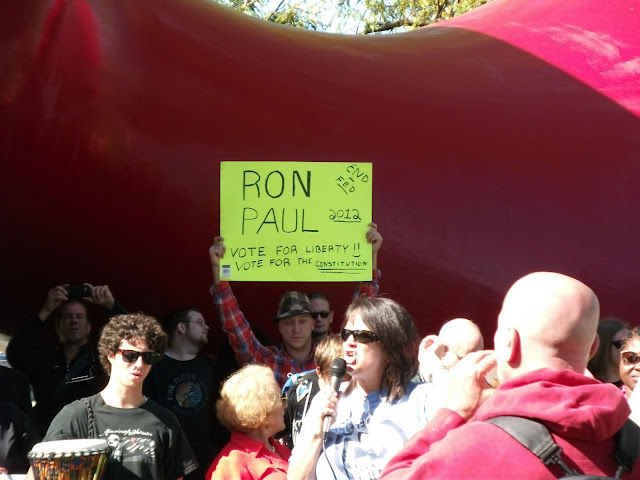 When someone introduced a representative from Moveon.org, I’m not sure what I expected, but I did not expect a white-haired man in his 70’s.  He wandered up to the microphone and said – I really don’t know what, these speeches were SO boring – something and then came back and stood near me. He leaned over to a woman about his age who was perhaps his wife and said, “Was that OK?” She nodded in approval. Then he said, “I’m thinking maybe I should get some business cards that say “Moveon.org.” I think that would be a good idea.”

Wait, what? This is the great and terrible Moveon.org? This old man who had nothing even mildly interesting to say and failed to get more than a yawn out of the loosely gathered crowd?  Well, kids, pay no attention to the man behind the curtain or you might see that this is a bunch of smoke and mirrors, just like the rest of these “protests.”

Eventually, one of the leaders told the crowd that it was time for the march that was planned. They said that anyone who had an opinion about where we should march should come to the microphone to share their thoughts and we would have a democratic vote.  Sheesh! I briefly considered proposing a march to Kapitalist Krispy Kreme, but restrain myself to keep from blowing my cover. Since only one person actually had an opinion, the majority decided to march to Public Square and City Hall.

About half a block into the march and the “This is what democracy looks like” chants,  I had had enough. We had marched passed several construction workers in orange vests – people who were actually working. I looked up at the buildings around me and thought about the people working hard to earn paychecks for their families, including my own husband, who was working in one of those buildings to provide for our family. I felt sick to my stomach. I felt like I was betraying my country and everything I believed in. It was one thing to stand on the outskirts of that group, listening to the speeches, but I could not march with them and become one of them.  We fell out of the march and headed back to our cars.

On that walk back to the parking lot, my friend and I reflected on the huge contrast between this group of protesters and those at the Tea Parties. Even though Tea Party members are angry and frustrated with the government and taxes and a host of other issues at times, the rallies are overwhelmingly uplifting and positive events. They are hopeful and focus on positive solutions. Even the music is designed to inspire and encourage.  #OccupyCleveland, in contrast, was the opposite. It was depressing, negative, unfocused, and offered no solutions. Add mindlessly boring to the list as well. There’s nothing worse than a completely unplanned, day-long open mic program.

I do, however, kind of like my fake tattoo.  I think I might keep it for a few more days. 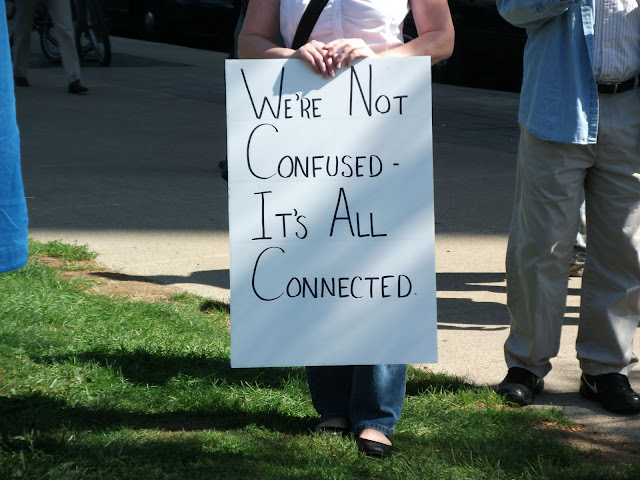 Crossposted at What to Read Today