The Strongman is never at fault.

So when a leader portrays himself as a Strongman, there is one sure-fire way to know that he is failing: you start reading pieces arguing that he is being Undermined by Large Shadowy Forces.

Whatever ends up happening there, one thing is for sure – the “resistance,” as it likes to call itself, is conducting a coordinated, slow-rolling coup against President Donald Trump.

The story won’t be that Trump was forced from office so much as it will be that Republicans let it happen. Which is just what the Democrats were counting on.

What is the evidence of a “coup” cited by Hunter? Basically, it’s a) leftist media bias and b) leaks from inside the government. Heavens to Betsy! Such things have never happened to Republicans before!

It’s not that leftist media bias doesn’t exist. I seem to recall it being a problem for one George W. Bush, and one George H.W. Bush, and one Ronald Reagan. I don’t think the media cared for Gerald Ford too much. Why, Deep State leaks and uniform journalistic hostility to the occupant of the Oval Office might have been present to some degree during the presidency of one Richard Nixon, don’t you think? Just a wee bit? Does that mean his resignation was the result of a coup? Um, no.

It’s time to acknowledge that maybe, just maybe, President Trump’s failure to date has been largely his own fault. Contemptuous of the notion of familiarizing himself with even a superficial level of policy detail, he can’t make the case for ObamaCare repeal the way Obama made the case for the law in the first place. Having created an absurdly chaotic White House by dint of his own lack of discipline and his obsession with television, praise, and his image, Trump is unable to fashion a legislative agenda that garners the votes he needs in Congress. The release of transcripts of his conversations with world leaders make him sound like an uninformed idiot . . . because he is an uninformed idiot.

But any admission of fault does not suit the image of The Strongman. Garry Kasparov, who knows something about the behavior of actual strongmen like Vladimir Putin, who (unlike Trump) use government to murder people, warned about Trump’s tendencies in March of 2016:

Trump doesn’t talk much about policy and is incoherent when he does. This makes it difficult for the pundits to make useful policy contrasts with the other candidates. This is by design. When Trump’s lies and flip-flops are pointed out, he presses on twice as loudly as before. What Trump does talk about relentlessly, instead of policy, are simple words with positive connotations. “Strength”, “power,” “greatness”, “energy”, “winning”, “huge”, “amazing.” Trump delivers these words, over and over, with the bravura of a carnival barker and the righteous anger of the oppressed, the trademark combination of the populist demagogue.

Trump also refers regularly to how he will demolish any and all critics and obstacles, from entire nations like Mexico to elected officials like Speaker Paul Ryan. He doesn’t talk about boring things like legality or procedure or how any of these threats and promises will be carried out. Before anyone can even ask, he’s on to the next audacious claim. “It will be taken care of!” “He’d better watch out!” “We’ll take the oil!” “They’ll pay for it all!” “It will be amazing!” Bold, decisive, fact-free, impossible, who cares? His followers love it.

All of these rhetorical habits are quite familiar to me and to anyone who has listened to Russian media—all state controlled—in the past decade. The repetition of the same themes of fear and hatred and racism, of victimhood, of a country beset by internal and external enemies, of how those enemies will be destroyed, of a return to national glory. How the Dear Leader apologizing or admitting error shows weakness and must never be done. Inspiring anger and hatred and then disavowing responsibility when violence occurs. It’s a match. As is the fixation with a leader’s personal strength and weakness, intentionally conflated with national strength and weakness.

There lies the clearest and most dangerous similarity between Trump and Putin: the authoritarian instinct, the veneration of power over the values that direct it. Trump has repeatedly praised not just Putin himself for his “strength,” but other tyrants as well. In 1990, in an interview with Playboy, Trump criticized Mikhail Gorbachev for not having a “firm enough hand” and spoke with admiration for the Chinese government’s massacre of protesters in Tiananmen Square.

This was all obvious at the time, yet people seem to be shocked that this 70-year-old man acts the same way as President that he has acted his whole life.

I come back to Trump’s praise for the Chinese mass murder at Tiananmen Square again and again, because I think it’s an important window into his soul — or lack thereof. That, more than anything else, tells me that Trump sees himself as The Strongman. And Kasparov’s observation that “the Dear Leader apologizing or admitting error shows weakness and must never be done” is one of the key features of The Strongman. He is never at fault.

All of these pieces about a “coup” against Trump are just rank propaganda to protect the nation from considering the real reasons for Trump’s failure. If we have identified a common enemy, we can rally the forces against that enemy, and we need not have any talk about whether Dear Leader might have some blame for his own ineffectiveness.

Is the media biased against Trump? There is no doubt. Are there “Deep State” forces that have declared him the enemy? I am quite sure they have.

But the media and the Deep State did not hold a gun to Trump’s head and tell him: “Do not learn about policy. Do not build a well-functioning White House. Instead, act like a narcissistic dummox. Watch television 24/7, tweet stupid nonsense as often as possible, and do your best to come off like a self-obsessed, amoral buffoon, so that your approval ratings tank and you can’t get anything done.”

That’s all on Trump. 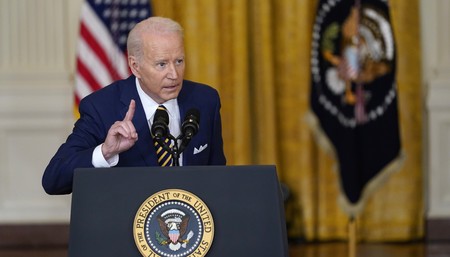 The Word Is in: Americans Savage Biden's Press Conference and His New Elections Narrative
Nick Arama