The Mania Continues: Liberals Meltdown With New 'Evidence' of the Postal Conspiracy

I now understand the mania that caused the Salem witch trials. Because we’re seeing it unfolding on social media with conspiracies surrounding the USPS that is truly bordering on insanity.

Let’s start with the basic thought that the last I checked, you can mail your ballot from your own house, just leave it in your mail box. So even if all the mailboxes disappeared into the wind tomorrow, you can still leave it in your box or take it to the Post Office.

But logic seems to have taken a holiday when it comes to those on the left and the mail box conspiracies.

Here’s the latest now burning up social media, proving how the evil orange man is trying to interfere in the election. Don’t worry, it’s a leftist conspiracy, therefore, it doesn’t have to make sense for Democrats and media to spread it.

This guy has almost a million followers who are now spreading this nonsense everywhere.

In your entire life have you ever seen a LOCKED mailbox at the USPS?

Where are you @senatemajldr ? pic.twitter.com/YcbVUTnv37

Not only is Trump somehow doing this but it’s racist too.

Pro tip? Post office is always closed on Sunday. If you actually used it, you would know that.

These red covers have been in place since at least 2016 after the last pick up of the day, shows how much any of these folks use a mail box. The purpose is literally to prevent theft of the mail, as this article from 2016 shows. All you have to do is go to the other side of the box to drop in the mail.

Here is where people can mail their letters at the Burbank P.O.. They lock the other side and the lobby is locked when the Post Office is closed. It’s very dangerous to post misinformation. It panics people, especially during this scary era. pic.twitter.com/aYPlJqzEP0

As the Post Office explained in 2016, according to Daily News:

Mail box retrofitting began last year but officials could not say how many boxes have been modified.

“We’re doing what we can to make these boxes safer,” Maher said.

One security method involves welding shut the drop-down door on walk-up mail boxes, and replacing it with a single slot so letters can be fed in one at a time.

“This helps prevent the fishing and we also have an anti-fishing device placed inside the boxes,” Maher said. “It is a ledge (type device) so that once a letter goes down in them it can’t come back up again.”

Some drive-up boxes have been fitted with red locking caps. Some double-box installations are fitted with a big red cover and a really big black lock.

The caps and covers are put on at the last pickup of the day and removed the following morning.

So liberals are complaining about the thing that would actually protect their letter/ballot, assuming they ever even used a mail box.

But bad orange man trying to steal the election!

The idea that Donald Trump is trying to steal the presidential election by temporarily locking four mailboxes in Burbank, California on a weekend in mid-August is a conspiracy theory, period. https://t.co/Y39TrDiJjs 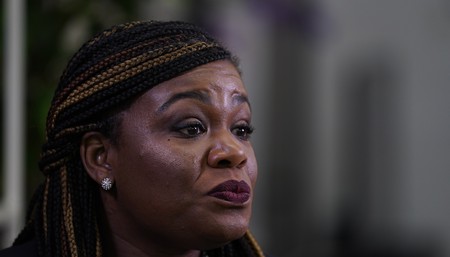 Oops: WH Claim About Why Biden Is Using 'MAGA' Leaves out the Embarrassing Truth
Nick Arama