Watch: Philly Man Physically Ripped off Bus by Multiple Police Officers for Not Wearing a Mask 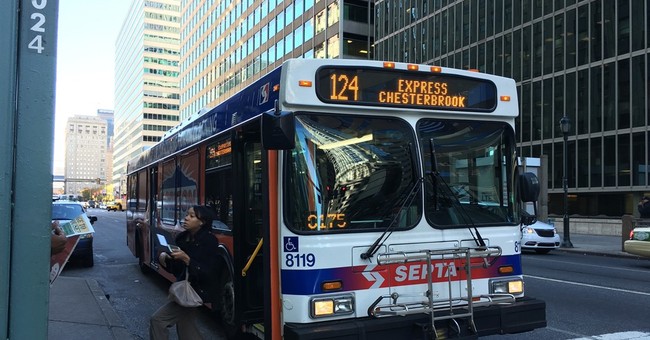 A woman gets off a SEPTA bus Monday, Nov. 7, 2016, in Philadelphia. Philadelphia’s crippling weeklong transit strike ended early Monday, assuring that all buses, trolleys and subways will be up and running by Election Day. (AP Photo/Megan Trimble)

Look, I’m all for keeping the public safe and public health, but it’s also about time we talk about the balance between protection and our civil rights.

We’ve seen a lot of questionable actions, like ticketing people for being alone in their cars at the Chicago lakefront, while the mayor is violating her own social distancing orders and getting a haircut.

When I saw people being pulled out of places in China, I thought, “That’s crazy, but that’s China.”

But this isn’t China, this is Philadelphia.

The first video shows a transit official came on and said everyone who didn’t have a mask had to get off. Meanwhile, that official wasn’t even wearing a mask. Some example there. The official even threw off someone who had on a functional mask. But a second video shows a rider who wasn’t wearing a mask who refused to get off who was then physically ripped off the bus by several police officers.

throwing off riders for not having masks. Are masks a requirement for riders? this dude's not wearing one pic.twitter.com/2IXtnI5dkO

do riders know that they might be pulled off a SEPTA bus by 10 cops for not having a mask? pic.twitter.com/NnHXJC02E8

It’s not clear whether there was any general announcement to the public that they had to wear masks. According to the Philly Transit Riders Union, there wasn’t. In fact, operators were told people could ride without masks, according to the Riders Union.

SEPTA website says nothing about masks, twitter feed says they are required, operators are told they’re not: pic.twitter.com/Ffp5S8kz0L

On the other hand, a rule for Septa apparently went into effect on April 9, but it doesn’t appear to have been well communicated.

So it’s very easy to see why the rider might not be aware of it and/or didn’t think it was true.

One of the reasons they’re doing that is that 100 Septa employees have gotten the virus and two have died.

The incident is allegedly under investigation by officials in Philadelphia.

But really? Has it really come to this? Ripping citizens off the bus? There wasn’t anyone left on the bus without a mask, who was he going to infect at that point? But by having multiple police officers struggle with him not only are you overreacting but you’re increasing the possibility of any infection with that very action. Most of the police officers weren’t wearing any gloves while they were struggling with the man.

Meanwhile, according to the Daily Caller, Philadelphia police announced that due to coronavirus, they would stop arresting people for “non-violent” crimes including burglary and drug offenses.