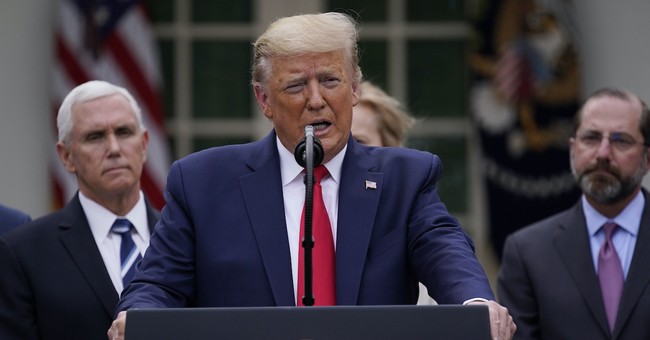 President Donald Trump speaks during a news conference about the coronavirus in the Rose Garden of the White House, Friday, March 13, 2020, in Washington. (AP Photo/Evan Vucci)

Democrats and media have told multiple lies about the response by the Trump administration to the Wuhan coronavirus. They falsely claimed that Trump cut the CDC when the budget was actually increased. Democrats including Joe Biden claimed that he was muzzling scientists from talking about the virus response even as those same scientists like Dr. Anthony Fauci were very visible giving advice and information in press conferences.

Perhaps one of the biggest lies was saying that President Donald Trump had called the virus a hoax when in fact he said no such thing. What he said was their lies about his response, like the ones I just mentioned in the prior paragraph, were a “hoax.”

But there was another story that has gotten a lot of traction and really wasn’t debunked until today, although it should have been debunked by media earlier, if they had really been concerned about accuracy – that is that the Trump administration eliminated the “pandemic team” from the NSC in 2018.

One place in which it was pushed was the Washington Post, who pushed the claim in an opinion piece on Friday by Elizabeth Cameron, who ran the office under President Obama.

Elizabeth Cameron ran the WH pandemic office under Pres Obama. Pres Trump closed it in 2018. Cameron writes in new op-ed, "When this new coronavirus emerged, there was no clear White House-led structure to oversee our response, and we lost valuable time."https://t.co/1vcgcxqQz1

First, here’s the refutation about the CDC global pandemic response from FactCheck.org:

But in remarks from the Senate floor on Feb. 24, Senate Minority Leader Chuck Schumer claimed the Trump administration made “drastic cuts to the global health division at CDC,” before saying, “In 2018, CDC was forced to reduce the number of countries it operated in from 49 to 10.”

“President Obama set up anti-pandemic programs in 47 vulnerable countries, as a way to protect against something just like Coronavirus breaking out across the world,” Murphy wrote. “Experts begged Trump to keep them open. He closed 37 of them.”

Murphy’s tweet appeared to catch the attention of Joy Behar, co-host of ABC’s “The View,” who made the same claim on the daytime talk show March 9.

The truth? The funding actually went up and the programs increased working not just in 47 countries, but 60, according to the CDC.

Those amounts went up again in fiscal year 2020, when the CDC was awarded $183 million for global public health protection, overall, and $125 million specifically for its global health security efforts. For fiscal year 2021, President Donald Trump has requested that CDC funding for global disease detection and other programs be increased further — to $225 million total, with $175 million going directly to global health security.

With its current funding, Bartee said, the CDC is actually working in “more than 60 countries” — not 10 — to address the threat of global infectious diseases and outbreaks.

What about the claim that the NSC office was dissolved? That’s wrong too, according to Tim Morrison, the former senior director for counterproliferation and biodefense on the National Security Council. The Washington Post let him counter the prior opinion article and he did, saying, “No, the White House didn’t ‘dissolve’ its pandemic response office. I was there.”

It has been alleged by multiple officials of the Obama administration, including in The Post, that the president and his then-national security adviser, John Bolton, “dissolved the office” at the White House in charge of pandemic preparedness. Because I led the very directorate assigned that mission, the counterproliferation and biodefense office, for a year and then handed it off to another official who still holds the post, I know the charge is specious.

Now, I’m not naive. This is Washington. It’s an election year. Officials out of power want back into power after November. But the middle of a worldwide health emergency is not the time to be making tendentious accusations. [….]

One such move at the NSC was to create the counterproliferation and biodefense directorate, which was the result of consolidating three directorates into one, given the obvious overlap between arms control and nonproliferation, weapons of mass destruction terrorism, and global health and biodefense. It is this reorganization that critics have misconstrued or intentionally misrepresented. If anything, the combined directorate was stronger because related expertise could be commingled.

So in other words because they combined offices to make things more efficient, Democrats and their willing support team in media are arguing they “eliminated” the office.

Even John Bolton weighed in and called it garbage. Needless to say, he has not love lost for the president so he isn’t saying it to defend him.

Reporting that alleges the Trump Administration dissolved NSC offices related to our biodefense are both false and misleading. Listen to those who ran the effort. This is a must-read for everyone who values truth over politics in a time of crisis. https://t.co/2AAsJMqrm0

Another myth debunked. From the article: “The reduction of force in the NSC has continued since I departed the White House. But it has left the biodefense staff unaffected…” https://t.co/8uQj3pcPn4

Direct, factual refutation of claim that the President disbanded his pandemic response team by the NSC official who led the biodefense mission.

The falsehood was widely reported and even stated as a fact by an NBC reporter in a question to the President. https://t.co/qTwfTfD0Mf

Unfortunately, it’s likely so baked into the “facts” by the media at this point, even with the facts, people are still not believing the reality.

This is the perniciousness of media lies.