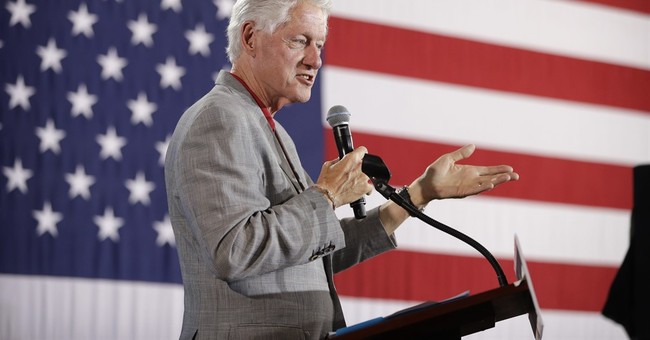 FILE – In this Sept. 14, 2016, file photo, former President Bill Clinton speaks while campaigning for his wife, Democratic presidential candidate Hillary Clinton in North Las Vegas, Nev. Ignoring his own sexually aggressive predilections, Donald Trump wants voters to see Bill Clinton as a scandal-plagued cad whose history with women should disqualify Hillary Clinton from the presidency. The argument doesn’t seem to resonate with America’s youngest voters, who know the 70-year-old former president as a figure out of history books and don’t seem to care about his Oval Office affair with Monica Lewinsky or other marital infidelities. (AP Photo/John Locher, File)

25 years ago, Bill Clinton had an affair with Monica Lewinsky, lied about it and, according to the Starr report, did a number of things to try to cover it up and obstruct an investigation.

25 years later, he proves he still is the same selfish jerk he was then.

In a new documentary on Hulu about Hillary Clinton, Bill Talks about that time and said he had oral sex with Lewinsky because it was one of the “things I did to manage my anxieties.”

Yikes. I’m sure that Lewinsky who has had her life to some degree defined by that famous association feels gratified to know that she was just a means to an end. Not to mention whatever his wife may think about that characterization of it now.

According to the Daily Mail, Bill Clinton said that the pressure of the job “made him feel like a boxer who had done 30 rounds” and Lewinsky was ‘something that will take your mind off it for a while’.

Clinton said he felt “terrible” her life was defined by the affair, but that ‘you’ve got to decide how to define normal’, suggesting that she should just move on.

‘You feel like you’re staggering around, you’ve been in a 15 round prize fight that was extended to 30 rounds and here’s something that will take your mind off it for a while, that’s what happens.

‘Because there, whatever life – not just me. Everybody’s life has pressures and disappointments, terrors, fears of whatever.

‘Things I did to manage my anxieties for years. I’m a different, totally different person than I was, a lot of that stuff 20 years ago,’ he said.

Needless to say, it didn’t go over well.

When some people experience anxiety, they go for a walk or mediate. Others binge on their favorite comfort food. But former President Bill Clinton has his own coping mechanism: Having sex with interns.https://t.co/UQGYC71bRC

Is that his explanation for what he did to Juanita Broderick (@atensnut)?https://t.co/i0wWi6477n

What in the Hell? On the next episode will he share why he raped.