Donald Trump is OWNED by Every Bank on Wall Street

Goldman Sachs once gave Ted Cruz’s campaign a $1.43 million loan. His campaign also got a loan of less than $500,000 from Citibank. According to Donald Trump, in a claim that has been repeated roughly a billion times, that means THEY OWN HIM. Even though, as far as I can tell, all or part of these loans have been repaid.

But of course, it’s much worse than that for Trump. As a twitter user pointed out, according to Trump’s most recent financial disclosures, he has hundreds of millions of dollars in loans from virtually every bank on Wall Street. Here is a copy of the form.

As you can see, Trump is in hock to a veritable who’s who of Wall Street banks, as one would probably expect of a person who makes a good portion of his living doing New York City real estate deals. The bare minimum amount displayed here is at least $250 million in loans, although of course it is probably much, much more than that. Trump has four loans listed here that are “over $50 million” and of course, those might go all the way up to a billion each or beyond.

Now, no one knows how much Trump is worth, and his own word is definitely not to be believed on that subject, but it is clear that some very significant amount of it is tied up as collateral for these loans. Nor would it really matter if Trump announced he were going to pay these all back tomorrow, at least by his standard.

I would frankly be surprised if someone of Trump’s business profile has not at one time had an enormous outstanding loan from every bank of any decent size in the country, in fact.

If Ted Cruz is owned by Goldman Sachs and Citibank because they once gave him a $1 million loan (even though it is completely or mostly paid back), then Donald Trump is definitely owned by not only Citibank and Goldman Sachs, but also by every name on this list.

Megyn Kelly: CNN, Other Outlets Partly to Blame for Capitol Riot: 'They Hated Him So Much, They Checked Their Objectivity'
Mike Miller

On Cancel Culture and Ex-NYT Editor Lauren Wolfe, Who Needs Some Cheese for that Whine
Jennifer Oliver O'Connell 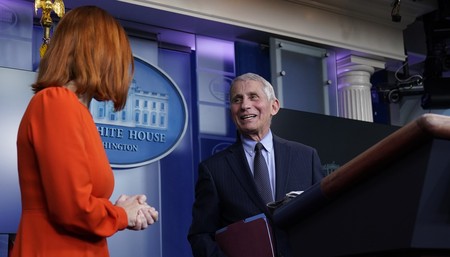 Liberal Tries to Use Fauci to Scold Trump, But Reveals How Bankrupt Biden and Left Have Been About Virus
Nick Arama

WATCH: Sen. Rand Paul Shreds George Stephanopoulos for Being a Liberal Hack
Townhall
Liz Cheney to Matt Gaetz: 'In Wyoming, the men don't wear makeup'
Twitchy
Rand Paul Serves As An Example Of How Not To Be Bullied As George Stephanopoulos Badgers Him On Election Fraud
Redstate
Terry Crews: White People Can Be Republican, But 'If You're Black, You Have to Be One Thing'
PJ Media