Well folks, looks like I could be “peeling off” a few more here. Not only do conservatives have to contend with Obama’s OFA (Organizing for America), progressive orgs like MoveOn, SEIU, et al in massive Get Out the Vote (GOTV) efforts but now I’ve discovered to my chagrin that NBC, MSNBC and YouTube are in the mix.

How did I get here? I’m not going to divulge all of my “Mrs. James Bond” tactics but it’s easier to just put it up on the screen in pictures.

I started out by wanting to delve further into the ultra-progressive cell phone company CREDO which has donated over $65 million to progressive causes but got side-tracked when I discovered what I’m about to show you. CREDO had its beginnings from Working Assets:

Working Assets is a for-profit business that markets services, including phone services and credit cards, to a liberal demographic, and provides a small percentage of its annual profit to non-profit liberal and activist organizations.

And if you scroll down to the bottom of the page you will see that Drummond Pike was the co-founder.

Working Assests and Credo fund ACORN and it’s voter registration arm Project Vote. As the screen shots from 2007 and 2008 illustrate. Click to enlarge. 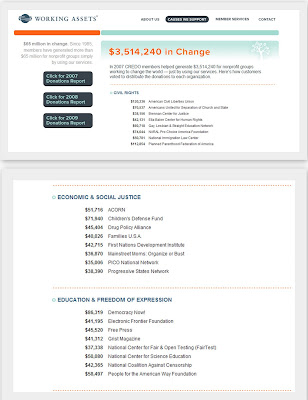 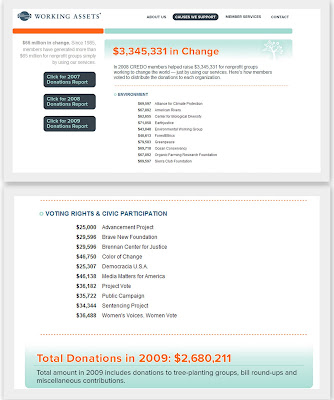 Here is Working Assets web page. Since a lot of these web pages tend to go to “URL heaven” I’m going to give you a screen shot of their “Activism Center.” Highlighting is mine: Note the above highlighted paragraph:

To further strengthen our democracy in the run-up to the 2008 election, we helped 2.5 million Americans register to vote and organized our landmark Election Protection program [emphasis mine] of volunteers, who fanned out across the U.S. to monitor polls and guarantee free and fair elections.

What many on the Right may not realize is that Election Protection and Election Administration are code words used by the Left to stop legitimate solutions to problems within our electoral system. Groups like ACORN and Project Vote have routinely sued Secretaries of State across the country to stop voter ID bills and prevent states from removing dead and inactive voters from the rolls. The term Election Protection is thrown around on the left as a way to convey what they like to portray as targeted attacks on minorities.
So I googled Election Protection and came up with this. Header is below: We get a list of all their member organizations. ACLU, Alliance for Justice et al. The Alliance for Justice members are mostly legal orgs but also contains Planned Parenthood and others protecting women’s abortion rights. SEIU as no surprise is on the member list but I didn’t screen shot it.

Now on to another screen shot of members: We see NAACP, Deepak Bhargava’s Center for Community Change, Color of Change and CREDO mobile. However, if one scrolls down further we find these other “members.” And the mega-surprise for me here folks was, as you guessed it:

If you experience problems at the polls on Election Day(such as long lines, voter intimidation, suspicious behavior, machine malfunctions, registration errors, etc.) you can report it to us via text message or the web by using your Twitter account! (Don’t have one? Click here to sign-up.)

Now if you look at a tweet they put out on Nov. 5, 2008, one day after the election: (screen shot in case they pull the account…): The URL leads you to this web page and I’ll give you a screen shot and a quote. Highlighting is mine: Washington, DC — Election Protection, the nation’s largest nonpartisan [emphasis mine] voter rights coalition, has fielded over 200,000 calls to its 1-866-OUR-VOTE hotline, including over 80,000 calls on Election Day alone. Questions and concerns from voters across the country – from the hotline, website and social networking sites like Twitter – were answered and acted upon by a network of over 10,000 trained volunteers across the country.

Nonpartisan? With members like ACLU, CREDO Mobile, SEIU, Color of Change, Center for Community Change? Come on guys, give me a break. For some reason this writer highly doubts with all these ultra-liberal progressive organizations involved in this massive GOTV effort their campaign slogan was “Vote McCain/Palin.”

Even though we all know Maddow, Olbermann and Matthews are full of drivel, it is still disturbing to this writer to find the names of NBC, MSNBC and YouTube as members of this “GOTV Coalition.”

Allegations of media bias have swirled around since before Obama was elected. Media outlets have been accused of ignoring stories and refusing to properly vet Obama and now with NBC, MSNBC and YouTube partners with OTHER leftist organizations to “protect elections” it’s easy to determine what side they are working for. Yes, this may have helped place a Man in the Oval Office in November of 2008.

FYI anyone interested in using CREDO Mobile they use Sprint service.

Listen to Trump About Ukraine Before It's Too Late
Townhall
Another Ron Klain boast (an attempted dunk on Trump) is aging like fine milk in the summer sun
Twitchy
WATCH: Jill Biden Shoves Joe off the Stage as Reporters Shout Questions
Redstate
Ginny Thomas Ruins J-6 Committee's Plan to Destroy Her
PJ Media