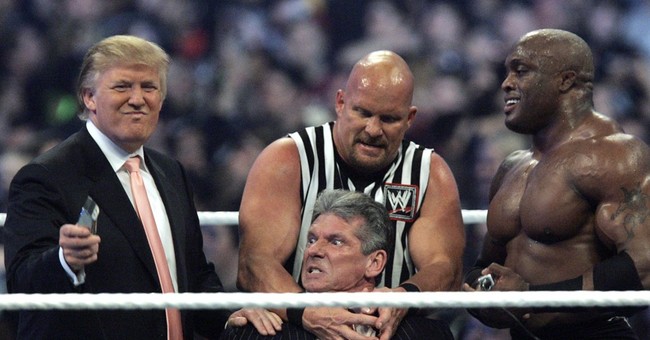 FILE – In this Sunday, April 1, 2007, file photo, WWE Chairman Vince McMahon, center, held by “Stone Cold” Steve Austin, prepares to have his hair cut off by Donald Trump, left, and Bobby Lashley, right, after Lashley defeated Umaga at Wrestlemania 23 at Ford Field in Detroit. Wrestling aficionados say President Trump, who has a long history with the game, has borrowed tactics of the sport to cultivate the ultimate antihero character – who wins at all costs, incites outrage and follows nobody’s rules but his own. (AP Photo/Carlos Osorio, File)

The state of Florida has decided that one of their largest economic drivers should be considered “essential” under current quarantine guidelines.

The New York Post reports that on Monday night Orange County mayor Jerry Demings announced he had been in discussions with Governor Rick DeSantis that eventually led to an agreement to reconsider the WWE as an essential business given their impact on the Florida economy. A spokesperson for DeSantis said in a statement that the WWE is “critical to Florida’s economy.”

“I think initially there was a review that was done. They were not initially deemed an essential business,” Demings said.

The WWE films in Orlando and has been airing pre-recorded episodes since Florida instituted quarantine guidance on April 1. Representatives for the entertainment company say they feel comfortable moving forward with recording new episodes.

“We believe it is now more important than ever to provide people with a diversion from these hard times,” the WWE said in a statement.

“We are producing content on a closed set with only essential personnel in attendance following appropriate guidelines while taking additional precautions to ensure the health and wellness of our performers and staff,” the statement continued.

Looks like some parts of the American economy are ready to get back in the ring.