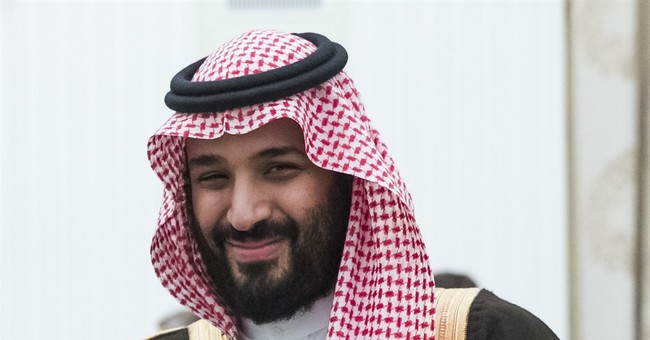 For the last couple days there have been rumors of a visit to Israel by a prince from Saudi Arabia — which officially has no diplomatic relations with Israel and is a party to the Arab League boycott on the Jewish State. Now, a Jerusalem-based reporter says she’s confirmed that the visitor was none other than Crown Prince Mohammad bin Salman, the next in line to be King.

This is a major milestone in the quiet diplomatic outreach between Israel and Sunni Arab states that has been a poorly-kept secret for years. Israel and the Arabs have a common enemy in Iran, and while Obama administration alumni may argue that their nuclear deal hasn’t made Tehran more dangerous, people who actually have to live in the region don’t have the luxury of playing pretend.

The Arabs’ interest in military cooperation with Israel opens up new possibilities for a final-status agreement in the Israeli-Palestinian conflict; some on the Israeli right (notably Defense Minister Avigdor Liberman) believe that a peace deal with the Palestinians can only be viable with buy-in from Israel’s Arab neighbors. The Arab League has endorsed the so-called Arab Peace Initiative first proposed by the Saudis in 2002; as it is, that plan is a non-starter (Israel is not going to absorb millions of Palestinian refugees or cede the Golan Heights to whatever’s left of Syria), but it could possibly be modified and used as starting point for negotiations.

The Trump administration should coordinate closely with our allies regarding Iran, but on the Palestinian conflict, the best approach is to step back and let regional actors take the lead. Driven by a vain fantasy of going down in history as a Mideast peacemaker, John Kerry pushed for negotiations at a historically inopportune time, and the predictable failure of that effort led to an outbreak of violence. If the new administration avoids that mistake, it’s not impossible that a peace deal may emerge with little effort from Washington.

Of course, the real challenge facing the region — a cash-flush Iran with regional ambitions and a short path to nuclear weapons — will remain a problem either way.