Pennsylvania Democrats' Monopoly Over Liquor Is A Big Problem 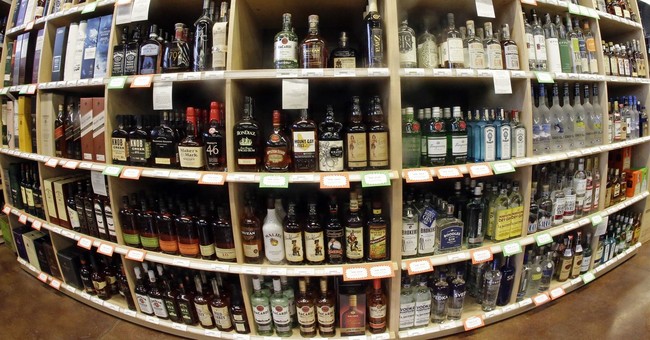 FILE – This June 16, 2016 file photo made with a fisheye lens shows bottles of alcohol during a tour of a state liquor store in Salt Lake City. A large international study released on Thursday, April 12, 2018 says adults should average no more than one alcoholic drink per day, and that means many countries’ alcohol consumption guidelines may be far too loose. (AP Photo/Rick Bowmer, File)

You may have noticed congressional Democrats refusing to support the GOP coronavirus package over the weekend, setting up some legislative drama for today.

But no matter what you think of what Congress is weighing, one thing you should know is that  Democrats are definitely playing a major role in screwing up the economy in the midst of this coronavirus outbreak. If they’re not doing it at the federal level, they’re definitely doing it in the states—Pennsylvania, specifically, where Democratic Gov. Tom Wolf is basically making a colossal mess of something that should be pretty easy and straightforward.

Right smack at the exact moment when tons of Pennsylvanians probably just want to have some bourbon and chill out after a day spent confined to the house, attempting to “work” remotely, fighting with Zoom or Google hangouts or FaceTime or whatever to connect with co-workers, possibly with screaming children and barking and meowing family pets all in the background, Wolf has done the most annoying and dumb thing possible: He’s shut every liquor store in the state and sent a notice to spirits producers that any scheduled deliveries will be denied—because the liquor stores are shut.

This is not merely frustrating and stupid, though. It’s also a great example of totally unaccountable government gone rogue.

Consider this: In Pennsylvania, taxpayers pay the rent for the stores, the wages for the government employee (and unionized) staff, and all the other costs associated with running the stores.

Revenues from sales in the stores fund the state’s general fund.

And in fact, in Pennsylvania, due to something called “variable pricing,” because of the state’s monopoly on liquor sales and inability for Pennsylvanians to get spirits anywhere else, those revenues run far higher than you might expect.

You’d think given this that Wolf might want to keep the stores functioning—even if government employee unions are complaining (and rumor has it they are)—while still implementing social distancing and appropriate safety measures.

How might Pennsylvania do that? Here are a few ideas, since Wolf seems to have none.

Of course, this would entail a Democratic governor growing a pair and telling public employee unions to take a hike. Though he probably does have the leverage to do this right now. Even though the spirits industry is going to get screwed like a ton of others in the course of the next few weeks and months, the reality is they’re performing a highly valuable public service right now and probably deserve some reciprocity: Believe it or not, they’re the ones producing the hand sanitizer. From Vermont to Georgia to North Carolina, this is not a joke.

HELPING OTHERS: The owners of #Durham Distillery are making a sanitizing solution & are giving it out FREE to local hospitality businesses. Owners say they are in unique position to help, because they have a permit that allows them to have high-proof 95% alcohol on site. @WRAL pic.twitter.com/7dlfcJWLkz

Will Wolf, Pennsylvania’s most powerful Democrat, pull his finger out or not? He could reduce the need for a lot of “stimulus,” and probably help a lot of people make it through this difficult time just slightly more comfortably.