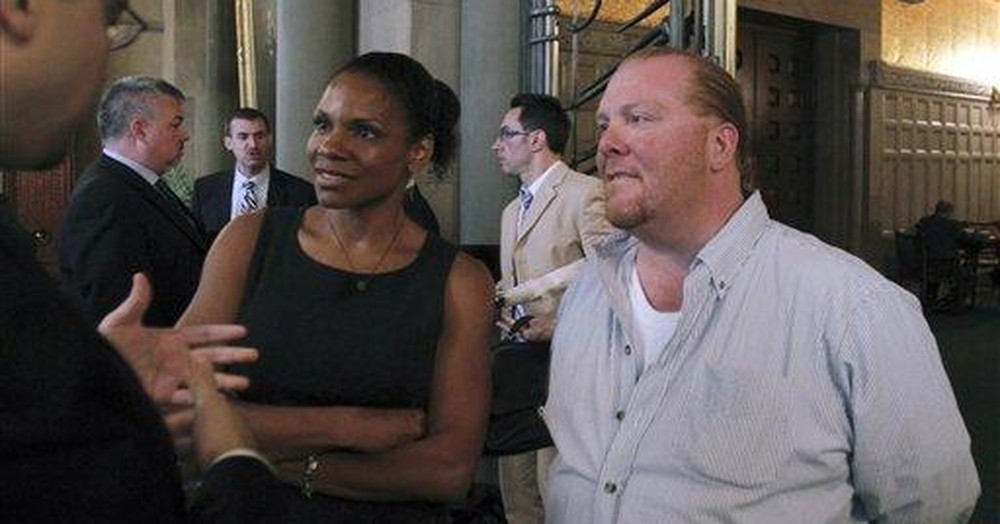 A famous New York-based Iron Chef and TV personality is the next big name to be accused of sexual misconduct in the workplace.

Mario Batali, who has been a celebrity chef and household name for years, is stepping away from his restaurants and ABC’s The Chew for the time being. ABC has said they are investigating the allegations.

Here’s the story, via Eater:

Minutes into their conversation, she recalls, he told her, “Come work for me, I’ll pay you double what you’re making.” Moments later, someone bumped her glass, spilling wine all over her chest and down her scooped-neck shirt. She alleges that Batali began rubbing her breasts with his bare hands while saying something like, “Let me help you with that,” as he groped her chest. “He just went to town, and I was so shocked,” the chef says. “Jaw on the ground, I just stepped back from him in utter disgust and walked away.”

The chef is one of four women who allege that Batali touched them inappropriately in a pattern of behavior that appears to span at least two decades. Three of the women worked for Batali in some capacity during their careers. One former employee alleges that over the course of two years, he repeatedly grabbed her from behind and held her tightly against his body. Another former employee alleges that he groped her and that, in a separate incident, he compelled her to straddle him; another alleges that he grabbed her breasts at a party, though she no longer worked for him at the time. The woman whose allegations are described above has never worked for Batali, though she works in the restaurant industry.

Batali agreed to step aside from his television work and his restaurants, saying the reports “match-up” with his behavior/personality.

“I apologize to the people I have mistreated and hurt. Although the identities of most of the individuals mentioned in these stories have not been revealed to me, much of the behavior described does, in fact, match up with ways I have acted. That behavior was wrong and there are no excuses. I take full responsibility and am deeply sorry for any pain, humiliation or discomfort I have caused to my peers, employees, customers, friends and family.

“I have work to do to try to regain the trust of those I have hurt and disappointed. For this reason, I am going to step away from day-to-day operations of my businesses. We built these restaurants so that our guests could have fun and indulge, but I took that too far in my own behavior. I won’t make that mistake again. I want any place I am associated with to feel comfortable and safe for the people who work or dine there.

“I know my actions have disappointed many people. The successes I have enjoyed are owned by everyone on my team. The failures are mine alone. To the people who have been at my side during this time — my family, my partners, my employees, my friends, my fans — I am grateful for your support and hopeful that I can regain your respect and trust. I will spend the next period of time trying to do that.”

Batali is not the first big-name chef to go down based on these kinds of allegations. New Orleans chef John Besh has also stepped aside from his restaurants for the time being.

In the world of celebrity – whether it’s in Hollywood, big-name journalism, or celebrity chefdom – it seems that no field is free of this type of behavior, where people in power tend to cross lines they would not if they didn’t have that power readily available to them.