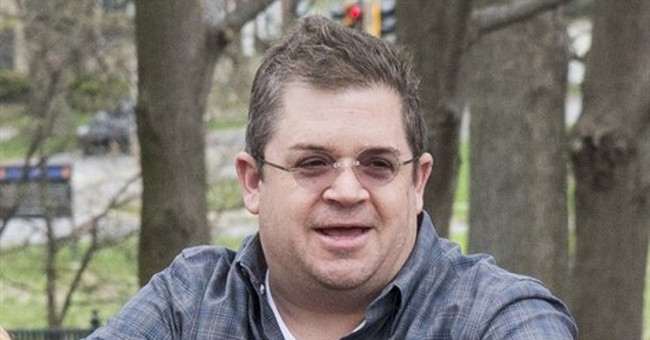 Stand up comic and actor Patton Oswalt leans on a fence as he talks to the crowd at the Ebertfest Reception at the University of Illinois Urbana-Champaign president’s house in Urbana, Ill., on Wednesday, April 23, 2014. (AP PHOTO/Robin Scholz/The News-Gazette)

During the course of our collective quarantine experience (the last month, give or take, but it feels like eons) we’ve been subjected to “words of comfort” of every sort from celebrities who can’t take time away from the quick adrenaline rush of public attention. They’ve tried to entertain us via live stream, some more successfully than others, and even abused the Instagram live feature by using it as a cheap therapy session (for reference: Madonna in her bathtub).

The absolute worst type of social media abuse celebrities, progressive “journalists” and the like can commit at a time like this is when they use their platform to impart their wisdom and knowledge to the lowly commoner. This is usually covered with a sneering veneer of elitist snobbery and a comparison to greater sacrifices throughout history. After all, the elitist must always ensure commoners know that they are the ones always looking out for the downtrodden.

It was this offense smug Patton Oswalt committed Saturday with this tweet:

Anne Frank spent 2 years hiding in an attic and we’ve been home for just over a month with Netflix, food delivery & video games and there are people risking viral death by storming state capital buildings & screaming, “Open Fuddruckers!”

Anne Frank spent 2 years hiding in an attic and we’ve been home for just over a month with Netflix, food delivery & video games and there are people risking viral death by storming state capital buildings & screaming, “Open Fuddruckers!”

Hey moron, Anne Frank was forced to spend two years there to escape the Holocaust. You can be damn sure that if she, her family, and the Dutch people had the means (a/k/a, weapons), they would have stormed capital buildings and run the Nazis back to Berlin. She knew without a doubt that if the Nazis captured her, she would be taken to a concentration camp and would probably die.

Take a gander at the Wuhan flu numbers and let us know how likely it is that someone leaving their home right now will contract the disease and die from it, Mr. Fancy Pants. If that was a virtual certainty, then no one at all should be outside. Not even for an abortion.

Also, does everyone have Netflix? Last I checked, some Washington Post guest columnist was kvetching about the kids who might be expected to “homeschool” when their parents don’t have internet access at home. In case you’ve forgotten, one can’t access Netflix without having access to the internet.

The kids who don’t have the internet probably don’t have video games either, or at least not many. And if they do – isn’t the prevailing wisdom that sitting around with their face in a screen all day isn’t a very healthy lifestyle for a child?

Mr. MENSA, if you were watching something other than CNN you’d know that 22 million Americans are out of work right now due to the coronavirus, and many of them (especially in your home state of California) haven’t received their unemployment checks yet. Small businesses that were relying on an extension of the Paycheck Protection Plan (you know, because your friend San Fran Nan said there would be phases of stimulus bills) to keep people employed are high and dry right now, because Nan is off playing with her grandkids and eating $8/pint ice cream and won’t come back to Washington, DC unless it’s an emergency.

Is this an emergency, or isn’t it? If you’re invoking Anne Frank, don’t you think Nancy oughta get her a$$ back to Washington and, you know, fix things?

And why did you have to drag Fuddruckers into this? Is it some lame attempt to reference Idiocracy because you view people who want to get out and work, contribute to society, and provide for their families as morons?

(Note: If reading this has awakened the hankering for a Fuddruckers burger, many of their locations are doing take-out and delivery – click here to order.)

Patton, if you truly believe that for the safety of the country people should stay home and not work, by all means, provide food and shelter for the families who’ll be losing everything.

The only thing worse than rich celebrities sitting in their mansions telling everyone to stay home is rich celebrities crapping on people who want to go to work so they can feed their kids.

Or, is it really about authoritarianism, and you and your buddies thinking you know better than everyone?

Authoritarianism and just an overall lack of caring about people has been on full display.

Food bank lines miles long and the message from the rich is, "Let them eat Fuddruckers."

As usual, a lefty can’t take someone hitting back at them. At least he admits Gutfeld has done better than he has.

Even richer ass-faced failed comedian who’s reduced to being the “wacky guy” on geriatric GOP propaganda network would like to explain the nuance of “ironic swastikas” to you pic.twitter.com/qPfm8jicNK

Our collective quarantine has brought everyone’s true colors out in the open. Let them keep talking, because every day that these “stay at home” orders are in effect, and every day people like Nancy Pelosi, Gretchen Whitmer, and Patton Oswalt have their elitist complete disconnect on full display is another day the anger of working class Americans grows. It’s readily apparent that the three of them either haven’t faced the tough decisions small business owners and managers have had to make about laying people off or cutting pay, or they just don’t care (because when the end goal is socialism, sometimes the little people have to suffer).

As an example, a friend of mine has worked at companies that supply equipment to the building trades for decades. Just six months ago he started his first big management job, with a new company, managing a retail/supplier hybrid location. The first “stay at home” orders in California were to last two weeks but his store was still open, being considered an essential business. As the weeks have worn on business has plummeted, and now he’s been faced with tough choices between across-the-board pay cuts or laying people off. It’s torture for people in supervisory or management positions to make these choices affecting the ability of their colleagues to put food on the table.

It’s a choice Patton Oswalt hasn’t been faced with in a long, long time, and it shows.