WATCH: Trump Dunks on Media By "Going to the Video" During Daily WH Press Briefing 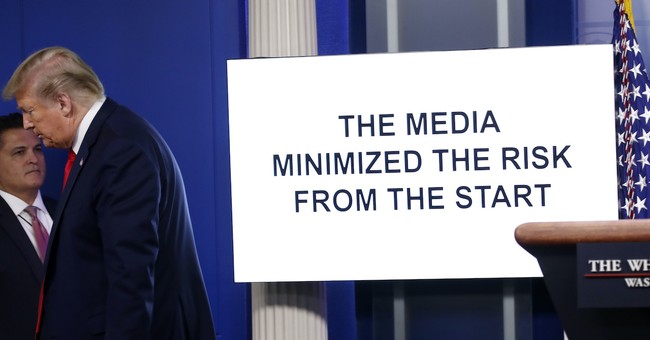 President Donald Trump walks from the podium as a White House produced video plays during a briefing about the coronavirus in the James Brady Press Briefing Room at the White House, Monday, April 13, 2020, in Washington. (AP Photo/Alex Brandon)

The mainstream media got their a**es handed to them by a justifiably frustrated President Trump during Monday’s White House Coronavirus Task Force press briefing. After Dr. Anthony Fauci addressed the press about the fake news du jour, Trump made a few remarks about how tiresome it is to constantly fight the MSM’s lie – then showed a nearly four-minute supercut video documenting them.

This is the supercut video President Trump just played during the coronavirus briefing. It includes clips of MSNBC and CNN pundits downplaying coronavirus, @maggieNYT defending his China travel ban, and Govs. Cuomo and Newsom praising his administration's response. pic.twitter.com/W6O1oEQuso

Predictably, CNN, MSNBC and others immediately cut away from the “propaganda” video. After it ended, Trump took questions. Right out of the gate ABC’s Jon Karl low-key accused Trump of using government resources to campaign, saying, “That looks like a campaign video.” Who produced that? Trump answered, and Karl’s follow-up question showed just how clueless and butthurt the White House Press Corps are. “Why did you feel a need to do that?”

Why, Jon? It’s an especially funny and ironic question given that probably every single “journalist” in that room (save OANN) is fawning all over 60 Minutes today for allegedly pwning Peter Navarro by showing a 2005 clip of Dr. Fauci on the show, talking about the need to prepare for a pandemic. 60 Minutes “came with receipts,” they’re saying, and it’s glorious. Just hours later there’s apparently a problem with proving the truth or falsity of an issue by using video.

Well, President Trump and the White House staff are rightly pissed off that instead of being able to fully focus on pandemic response and eradicating coronavirus they have to fight all of you first and your CCP-inspired disinformation campaign. Mr. Karl, you and your colleagues would never listen to Trump asserting the same things that were shown in the video. He could read an official transcript with date and time and you would still say he’s lying. So he went to the tape, and the reason you’re mad is because you can’t refute it.

The “campaign video” and “propaganda” angle quickly picked up steam among the blue checks, but at least a few proclaimed the truth.

BRUTAL!!!! @realDonaldTrump shows video evidence that the Mainstream Media minimized the virus from the start! Well, @brianstelter and @oliverdarcy – care to comment?

Trump is now playing a video at the White House briefing attacking the media.

Stelter couldn’t bother to give the peons his opinion on Twitter, instead opting to attempt to lure more than four people into watching CNN Situation Room. (Bonchie covered the CNN reaction here.)

Never Trump and progressive pearl clutchers continually squawk that Trump’s methods and words are “unprecedented” or something they’ve never seen before. What’s unprecedented is the manner in which these impeccably proper journalists speak to the President of the United States. In the clip below, CBS’ Paula Reid was completely disrespectful and totally argumentative. She sounded like a bratty teenager talking back to a parent, not a professional journalist asking the leader of the free world a question.

Here's video of @PaulaReidCBS grilling Trump on what his administration did in the month leading up to the coronavirus crisis.

While you’re watching the video, pay attention to CNN’s chyron. Talk about being owned by China or Russia. Unbelievable.

Pentagon Confirms Second Chinese Spy Balloon, Here's Where It Is
Townhall
Somebody broke Bill Kristol: You have to see his crazy Chinese spy balloon tweet
Twitchy
New North Carolina Supreme Court Sends the Left Into Fits of Rage
Redstate
BOMBSHELL: White House KNEW About the Chinese Spy Balloon and Covered It up — but Then…
PJ Media