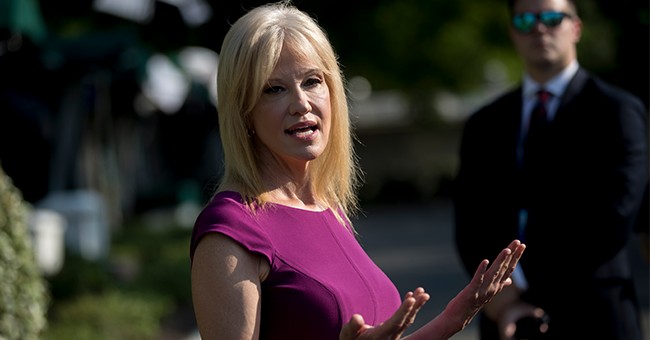 Counselor to the President Kellyanne Conway speaks to reporters outside the West Wing of the White House in Washington, Wednesday, May 29, 2019. (AP Photo/Andrew Harnik)

Since 2016 the mainstream media have become gaslighting experts, but with this latest “controversy” about someone on the White House staff calling the Wuhan coronavirus “Kung Flu” they’ve really leveled up.

First, one reporter claims that she overheard an unnamed, ungendered White House staffer refer to the virus that’s caused a pandemic as the “Kung Flu.” While normal people could think that’s a funny or slightly funny pun, in a world where it’s not permissible to say that this strain of the coronavirus originated in China it’s practically a capital offense.

The reporter will not name who allegedly used that “slur,” but that isn’t stopping the press from demanding answers from both POTUS and Kellyanne Conway about whether it was appropriate and demanding that they “condemn” the use of that term. Ad nauseam.

Trump was asked about the “Kung Flu” accusation and still no one will name the official. pic.twitter.com/zQkr1g4ZQ3

Here is this reporter’s question. See if you can spot the irony (hint: it’s in bold).

My second question is, there are some – at least one White House official who used the term Kung Flu, referring to the fact that this virus started in China. Is that acceptable? Is it wrong? Are you worried that having this virus be talked about as a Chinese virus, that that might focus…

Would you condemn the fact…Kung Flu…

Do you think using the term Chinese virus, that puts Asian-Americans at risk, that people might target them?

Do you see how they try to weave the subconscious thought that Trump’s “rhetoric” puts minorities at risk? They’re so desperate to do so that they manufacture a controversy then continually demand that Trump, et al answer for what is, in all likelihood, #FakeNews.

Not satisfied with Trump’s answer, the gaggle attempted to bully Kellyanne Conway.

Conway asked them to name the staffer and tried to steer the conversation back toward the topic at hand, which would be “flattening the curve” or slowing the spread of the Wuhan coronavirus. Instead, they’re asking hypotheticals.

What is your message to those staffers? Is it wrong?

Another journalist piped up:

I think you understand how these conversations go. I am also a journalist…

When the reporter apologized and said she actually didn’t know that, Conway’s reply was priceless:

You’re all so obsessed; I thought you knew.

I’m trying to be here to help you help America understand how to slow the spread, and you’re shouting at me in a way about something that somebody allegedly said to someone else, and I’m asking, who was it? Why don’t we go to the source? I certainly didn’t say it. I don’t believe it. So why don’t we go to the source and tell them that’s very hurtful and unhelpful for what we’re all trying to do. Pardon me if I’ve been mistaken that you all are trying to inform America as to what’s going on…

RedState columnist Nick Searcy has the correct attitude (as usual):

KUNG FLU is funny, but "Wu Tang Clap" is funnier. Why couldn't an unnamed White House official use that term, or Moo Shu Achoo, or Hong Kong Flooey? Or Lung Pao Sicken? Up your game on these SJW media losers, Unnamed WH staff! Let's piss some sissies off! #ChineseVirus https://t.co/F7Lx0skxsM