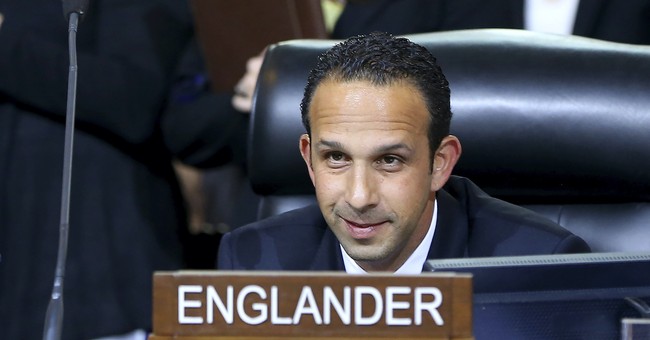 FILE – This May 19, 2015 file photo shows Los Angeles City Council member Mitchell Englander during a Los Angeles City Council meeting in Los Angeles. Englander, who resigned in December, 2018, has been indicted on charges that he obstructed an investigation into whether he took thousands of dollars, female escort services and other gifts from a businessman involved in major developments, the U.S. Attorney’s Office said Monday, March 9, 2020. Englander, 49, surrendered to FBI agents Monday morning to face arraignment. (AP Photo/Damian Dovarganes, File)

It’s no secret that Los Angeles City Hall and all of its departments are filled with corruption. It’s so rampant that people joke about the “grift fee” that must be added to any projects in the city. Republicans like to claim that that’s what happens when Democrats are in charge, but the reality is that Democrats don’t have a lock on corruption and immoral behavior.

For example: Former Los Angeles City Councilmember Mitch Englander, who surrendered to the FBI Monday on charges of witness tampering, making false statements, and scheming to falsify facts related to money and gifts received from a businessman who had real estate project approvals pending before the Council.

Englander was elected to the Council in 2011 and was regarded as an up-and-coming political power in the state until his sudden resignation in October 2018. Though he stated he was resigning to take a position as Vice President of Government Affairs for a sports management firm, rumors that the FBI was investigating various councilmembers led many local political observers to raise an eyebrow.

The following month the FBI raided Councilmember Jose Huizar’s downtown office, and since that time search warrants reveal that agents are “seeking evidence of potential crimes including bribery, kickbacks, extortion and money laundering involving more than a dozen people, including Huizar and aides in his office; Councilman Curren Price, who represents part of South Los Angeles; Deron Williams, who works as a top aide to Councilman Herb Wesson; and former Department of Building and Safety chief Ray Chan, among other city officials and business figures.”

Nothing has been said about Englander – until now.

The indictment released Monday claims that Englander, his then-aide John Lee (who essentially inherited his boss’ former seat), and another city employee went on a Vegas junket in June 2017 with the businessman, a lobbyist, and a real estate developer. From the LA Times:

The businessman got them hotel rooms and “amenities ordinarily limited to VIP customers,” investigators found. At the resort, Englander took an envelope containing $10,000 in cash from the businessman in a bathroom, according to the indictment.

The businessman also gave Englander roughly $1,000 in casino chips, treated the group to $2,481 in dinner and drinks at a restaurant at the Vegas resort and paid approximately $24,000 for bottle service and alcohol at a nightclub, federal investigators found. In the early morning, after they returned to their hotel, the businessman told Englander he was ordering female escorts for the group, whom he paid $300 to $400 in cash for their services, the indictment states.

Englander also met with the businessman at a Palm Springs golf tournament in 2017 and accepted $5,000 in cash during a bathroom break.

A week later, Englander brought the businessman to lunch with a person identified in the indictment as “Developer B,” whom prosecutors described as the CEO of a construction company. The purpose of the lunch, the indictment said, was to give the businessman a chance to introduce himself and his company to the developer.

After the lunch, the developer emailed the men to thank them for the lunch and suggested another meeting to allow the businessman to make a “presentation,” according to the indictment.

The FBI intercepted a call in the summer of 2017 leading them to investigate whether Englander, another Councilmember, and two of Englander’s staffers (one of whom is now identified as John Lee) received unreported “personal benefits” from the businessman.

After Englander’s surrender, Lee tweeted that while he was with Englander on that Vegas trip, he “did everything in [his] power to pay for and reimburse expenses related to this trip,” that he was “unaware of any illegal activities for which Councilmember Englander is being charged,” and that he met and cooperated with the FBI back in 2017.

(2/2) I completely cooperated with the FBI when they contacted me for voluntary interviews in July and August 2017 and will continue to do so.

Lee’s statement raises more questions than it answers. What does “everything in my power” mean? How does a staffer attend such a trip being unaware of the perks being handed out by someone who has business before the council? How many of Lee’s donors were developers asked to contribute to the campaign by Englander? Was Englander’s assistance in getting Lee elected offered as a quid pro quo? “You stay quiet, and I’ll make sure you have all of the contributions you need?” During the special election campaign – with a very crowded field – Lee didn’t show up to a number of candidate forums and other events, seemingly assured that his massive money advantage would earn him the seat – and he was right. His campaign finances should be examined to see if Englander’s activities carried over into Lee’s campaign.

Republicans in California will never be able to make a difference if they can’t offer anything different than the corrupt morass created by too many years of one-party rule.

(Disclaimer: This writer is professionally acquainted with Brandon Saario, who ran against John Lee in the 2019 City Council Special Election.)