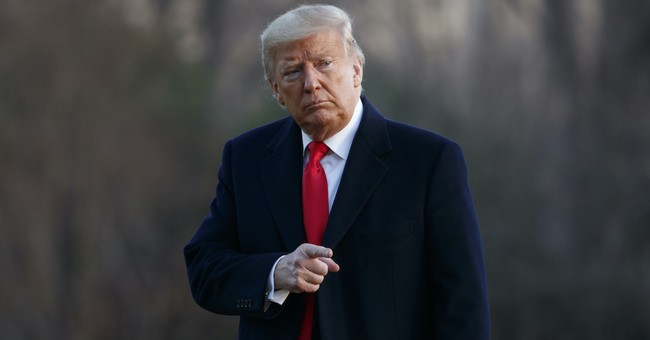 President Donald Trump points to the media as he arrives at the White House in Washington, Saturday, Feb. 29, 2020, on Marine One as he returns from speaking at the Conservative Political Action Conference (CPAC). (AP Photo/Carolyn Kaster)

According to a report from Politico, President Donald Trump will not attend the annual St. Patrick’s Day lunch at the Capitol this coming Thursday. The event, which has been a yearly tradition since 1983, is set around the Taoiseach – Prime Minister – of Ireland’s visit to the U.S.

This would be the first time a president has skipped the lunch since 2003. Former President George W. Bush did not attend because it took place in the days leading up to the U.S. invasion of Iraq.

The Speaker of the House usually hosts the event, and the contentious relationship between Trump and Nancy Pelosi seems to be the reason for his refusal to attend. White House Spokesman Judd Deere told Politico that the president would forego the lunch due to Pelosi’s tendency to use such events to launch political attacks. He wrote:

“Since the Speaker has chosen to tear this Nation apart with her actions and her rhetoric, the President will not participate in moments where she so often chooses to drive discord and disunity, and will instead celebrate the rich history and strong ties between the United States and Ireland at the White House on March 12.”

The statement also explained that Trump “looks forward” to welcoming the Taoiseach for the yearly Shamrock Bowl presentation. Pelosi’s spokesperson responded, criticizing the president for failing to “set petty partisan politics aside for this historic occasion.”

The tradition began in 1983 when Tip O’ Neill invited Ronald Reagan to the Capitol to attend the lunch. The event has been missed by presidents four times since then, and they sent their vice presidents in their stead. However, Vice President Mike Pence is not scheduled to attend, so this instance would represent a total boycott on the part of the Trump administration.

While traditions such as this are a decent way to solidify the relationship between the U.S. and her allies, it’s hard to blame the president for refusing the attend. Pelosi has pulled stunts designed to politicize events in the past and would certainly not miss an opportunity to do so in this case. It seems more appropriate to meet with Ireland’s prime minister on his own terms, not Pelosi’s. After all, what would be the point of giving her another opportunity to grandstand?