How the Trayvon Martin case showcases the plight of black America... but probably not in the way you think.

It’s been 20 years since Maxine Waters coined (or at least popularized) the phrase “No Justice No Peace”. The time was after the LA Riots in 1992 when the freshman Congresswoman from Los Angeles was defending looters as simply “women who wanted shoes for their children and bread”. Of the violence that eventually claimed the lives of 53 people, Waters said: “The anger that you see expressed out there in Los Angeles, in my district this evening, is a righteous anger, and it’s difficult for me to say to the people, ‘Don’t be angry.’” She even went on use the threat of further violence around the country to try and extort action of some sort out of the White House. “Many other cities could go the way that Los Angeles went last night unless the president is willing to step in and take some strong action in terms of letting people know that he cares about this issue.” The White House listened and indeed a new trial was brought about, double jeopardy be damned. This time two of the officers were convicted. Finally some justice! For those Constitutional sticklers out there… The argument was that double jeopardy didn’t really apply as the four were charged with civil rights violations the second time rather than assault and excessive force, so, no problem at all.

So now here we are, two decades later and again race and crime intersect to put American cities on edge. “Justice for Trayvon” has been the ubiquitous call for much of the last year. This is easily one of the most high profile – and consequently political – trials in decades. The original prosecutor declined to press charges, believing there was not sufficient evidence for conviction. Enter race pimps Al Sharpton and Jessie Jackson and judicial frivolity ensued.

While one’s heart has to go out to the parents of Trayvon as their grief and sadness is very real and they have comported themselves with dignity in the most trying circumstances a parent will likely ever face, the “Justice for Trayvon” signs across the country have little to do with what went on that fateful night last year or what went on in that Sanford courtroom over the last month. 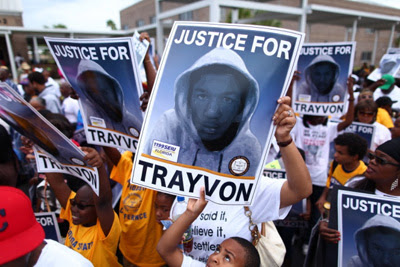 But then that doesn’t really matter because in America of 2013 the only thing that does matter is satiating the demands of raucous mobs or favored demographic groups. Just on cue, now that the verdict is in the demands for federal civil rights charges have already started. Prior to the verdict, as the Miami and Sanford police departments prepared to deal with the consequences of a potential not guilty verdict, one couldn’t help but wonder how we had arrived here in the first place.

I remember watching the OJ trial and verdict as it was read aloud. To say I was dumbfounded is an understatement. More stupefying however was the scene from a college student union filled with black students who erupted into joyous pandemonium when the verdict was read. How was it even possible that anyone could cheer a ruthless murderer getting off, just because of his skin color?

One has to wonder how did race affinity ever come to replace common sense, or self preservation among so many people? The perfect example of the latter is the movement in New York City to ban “Stop and Frisk”. Stop and Frisk has been a tremendous success in helping to drive down and keep down crime rates in crime ridden neighborhoods of the city. Nonetheless, many blacks have objected to the policy because blacks are disproportionately stopped. Perhaps, but those neighborhoods have a disproportionate number of blacks and black lives are disproportionately saved as well. And the neighborhoods in which many of those black citizens live are safer than they might be without Stop and Frisk. Safer neighborhoods help with jobs, schools and quality of life. But let’s get rid of it, regardless of the lives saved or improved.

Just as knee jerk white racism a half a century ago was irrational and ignorant, so too is the knee jerk black racism of today. The difference is, the black racism of today is part of the liberal & media fiction that the state of black America is the result of white racism. Nothing could be farther from the truth. Blacks may indeed be victims, but they are largely the victims of other blacks, not whites. According to the Bureau of Labor Statistics points out – via Walter Williams – that between 1976 and 2011 279,000 blacks were murdered in the United States, 94%, or 262,000 of them, by fellow blacks. That compares to a 3,446 blacks being lynched by whites in the 86 years between 1882 and 1968!

This irrational focus on the relatively insignificant (not to be confused with nonexistent) white racism at the expense of a focus on the far greater danger to members of the black community, the black predators preying on them, is an extraordinarily expensive mistake. By focusing on the mirage of widespread white racism, many blacks cease to address the dangers and issues within their own communities, with devastating consequences. It has led to over a quarter of a million dead young black men over the last four decades. Perhaps even more damaging more is the fact that tens of millions of black Americans live in poverty, 45% of black teens cannot find a job and over 75% of black children are born out of wedlock.

If the so called black leaders of today were really concerned with the state of black America, and young men like Trayvon while they are still alive, they would put down their “No Justice No Peace” posters and turn their focus on saving black America from itself. Stop supporting murders like OJ Simpson and Mumia Abu-Jamal and start honoring men like Herman Cain, Dr. Ben Carson, McDonalds CEO Donald Thompson, American Express CEO Ken Chenault and US Supreme Court Justice Clarence Thomas, all of whom chose to build successful lives for themselves rather than bleat about the oppressive nature of a majority white society.

Instead of clamoring for never ending government programs, special dispensation in jobs and college admissions or seeing every crime or political issue through race tinted glasses, they should instead focus on reducing unwed and teen pregnancies, demanding quality education for their children and seeking relief from government regulations in order to make black communities compelling places for businesses to invest. 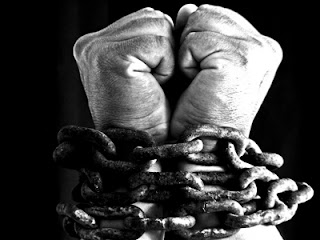 Don’t hold your breath however, because leadership in solving real problems is much harder work than just picking up the racism flag and waving it about so that people pay attention to you and call you a “black leader”. The civil rights movement helped destroy the scourge of white racism that had constrained the lives of blacks in America for centuries. One wonders what it will take, or how many more dead young black men it will take to remove the shackles of black racism that keep so many black Americans from enjoying the fruits of liberty that that people like Martin Luther King, Malcolm X, Rosa Parks and Medgar Evers fought so hard to give them access to?