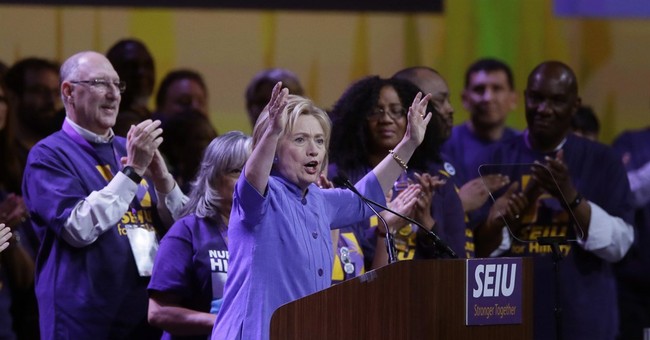 It’s widely known that government unions are hotbeds of corruption. There’s hardly any other way to put it when union bosses forcibly take money out of public-sector employee paychecks to line their campaign war chests, use that money to buy corrupt politicians, then negotiate with their bought-and-paid-for lawmakers for sweetheart government deals at taxpayer expense.

But recent developments have revealed a level of corruption that goes even further.

Forging signatures to begin stealing money out of paychecks of people who never wanted to join in the first place.

One instance of forgery might be a misunderstanding or miscommunication.

Twelve instances of forgery is a pattern of criminal behavior.

In March, the Freedom Foundation filed five lawsuits in one day against unions in Washington, Oregon and California for forging documents authorizing the union to deduct dues or political contributions from public employee paychecks.

Several of them are in-home care providers who don’t want or need to interact with a union rep outside their loved one’s house.

Several forgeries occurred as online signatures (and these are the same people who want to control our voting process).

In at least one instance, a union rep went to a person’s home, asked them to sign up for membership, was told no thank you, and then walked away and signed the card anyway.

In every case, when the unions were contacted to provide proof that the employees did, in fact, sign themselves up, the unions made excuses and delayed for months or even more than a year, all the while continuing to illegally take money from these paychecks.

The Freedom Foundation is representing each of these people free of charge, as we always do. One forgery lawsuit partially settled for $28,000 in 2019, but it remains ongoing.

Many of these lawsuits seek a full refund with interest, but some of the people Freedom Foundation is representing just want the dues to stop from here on out and for the union to leave them alone.

There are more potential cases already under investigation. If you’re a public employee who suspects a union might have forged your signature, or if you know of someone who does, contact the Freedom Foundation at www.freedomfoundation.com.

We’ll keep the RedState community updated on these developments.

Ashley Varner is the vice president of communications and federal affairs for the Freedom Foundation, a free-market organization committed to helping free public sector employees from union tyranny.