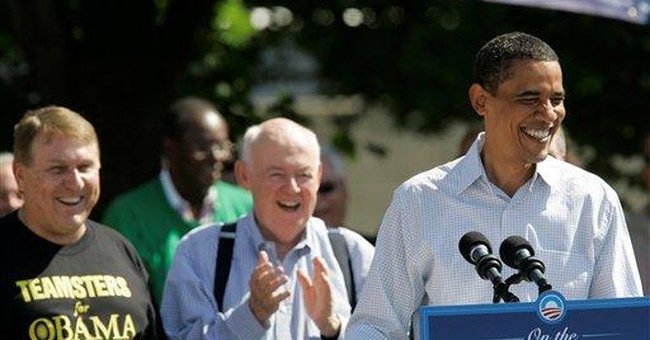 While loathe to admit it, many government unions finance their extensive political operations with dues collected from members ostensibly for workplace representation. Thanks to the Freedom Foundation, however, members of Teamsters Local 117 now have less of their dues diverted to political purposes.

Teamsters 117 claims to represent about 16,500 employees working for 200 employers in Washington, making it one of the 10 largest in the state. A large segment of the union’s membership works for the government, including the state Department of Corrections and a number of local and municipal public employers.

Historically, Teamsters 117 had financed its political contributions through the “Teamsters Local 117 Segregated Fund” (SF), which is registered with the Internal Revenue Service (IRS) as a “political organization” under 26 U.S.C. § 527.

Lack of proper reporting made identifying the source of the SF’s funds and its expenditures difficult. Federal law requires political organizations to file periodic reports with the IRS itemizing contributions received and expenditures made. However, a political organization can avoid reporting its financial transactions to the IRS if it instead reports them to a state government campaign finance entity, as many state laws require. In Washington, campaign finance reports related to Washington elections must be filed with the Public Disclosure Commission (PDC).

In its IRS filings, the SF repeatedly claimed exemption from reporting its contributions and expenditures to the IRS because it instead reported them at the state level which, if true, would have been appropriate. In reality, however, the SF never registered as a political committee with the PDC and didn’t report its contributions or expenditures at all, meaning its political activity was invisible to the public and in violation of both state and federal laws.

Nevertheless, Freedom Foundation research uncovered the SF’s existence and documented its failure to disclose its activity as required. In August of 2017, the Freedom Foundation filed a complaint and over 500 pages of supporting documentation with the Washington State Attorney General’s Office (AGO) explaining the SF’s violation of state campaign finance laws.

In response to the Freedom Foundation’s complaint, Teamsters 117 admitted the Segregated Fund’s existence to the AGO and acknowledged that it was entirely funded by the union — using members’ dues, not contributions from members in addition to dues — though it argued the SF hadn’t violated state law by failing to disclose its political activity:

“…Local 117’s SSF is managed, operated, funded and directed entirely by Local 117 itself. John Scearcy, Local 117’s Secretary Treasurer, makes all final approvals of monies provided to and spent from the SSF. Regarding expenditures, Mr. Scearcy receives requests from Local 117’s Legislative Affairs Department and then decides whether certain monies should be spent. Mr. Scearcy has the final say for all expenditures that are made from the SSF, as well as for all of the day-to-day expenditures involved in running Local 117 and all contributions of money from Local 117 to the SSF.

The following December, after the Attorney General failed to initiate any enforcement action, the Freedom Foundation filed a citizen action lawsuit against the SF in Thurston County Superior Court.

While the lawsuit remains ongoing, it appears it has already succeeded in getting Teamsters 117 to shutter the Segregated Fund. Within a month of the Freedom Foundation’s lawsuit, Teamsters 117 registered a new political committee, the “Teamsters Local 117 Working Families PAC,” with the PDC and subsequently registered it with the IRS as a political organization in May 2018.

Assuming the reports filed by the new PAC are accurate, it has been funded since its creation by more than $100,000 in contributions received from DRIVE, the federal political committee operated by the International Brotherhood of Teamsters (IBT) in Washington, D.C.

Because it is used to engage in federal elections, DRIVE must operate in compliance with the Federal Election Campaign Act, which prohibits unions from using dues money to contribute to federal candidates. Accordingly, Teamsters unions around the country, including Local 117, fundraise for DRIVE, seeking to get members to voluntarily contribute to the fund above and beyond their regular dues.

In other words, the Freedom Foundation’s lawsuit, though currently on appeal and thus still working its way through state courts, apparently forced Teamsters 117 to cease siphoning members’ dues to the off-the-record SF for political activity and to instead rely on voluntary contributions to a fund that publicly discloses its political activity as required by law.

This is a win both for the public, which now has more transparency regarding Teamsters 117’s attempts to influence Washington elections, and for the members of Teamsters 117, who have less of their dues diverted to the union’s political program.

Unfortunately, the change does not mean members of Teamsters 117 will no longer subsidize political activity through their dues. At Local 117, thousands of dollars in staff time and other dues-funded union resources are involved in administering the new PAC and, as is the case in most large unions, members of Teamsters 117 don’t just pay dues to support their local.

While the local collects the dues members’ pay, it forwards some of the funds to Teamsters Joint Council 28 — a regional entity with jurisdiction over Washington, Alaska and north Idaho — and the IBT. Each of these entities has its own staff, budget and political operation.

Joint Council 28 regularly transfers $100,000-$200,000 of its annual budget to its political committee, the “Washington Teamsters Legislative League,” according to PDC filings. And, for its part, IBT reported to the U.S. Department of Labor that it spent $12.7 million on “political activities and lobbying” in 2018 alone.

There’s nothing wrong with unions engaging in the political process using money that has been voluntarily contributed for that purpose. While this goal has yet to be fully achieved for Teamsters members in Washington, it’s a little closer to reality thanks to the Freedom Foundation’s advocacy.

Why the 'Power Grab' Case That's Heading to the Supreme Court Could Give the Left Fits
Townhall
Alrighty then: Jim Carrey is leaving Twitter … we say goodbye with some Jim Carrey movie quotes
Twitchy
Biden COVID 'Lead' Inadvertently Says the Quiet Part Out Loud on Censorship
Redstate
4 Reasons Police Haven't Arrested or Named a Suspect in the Idaho 4 Murders
PJ Media