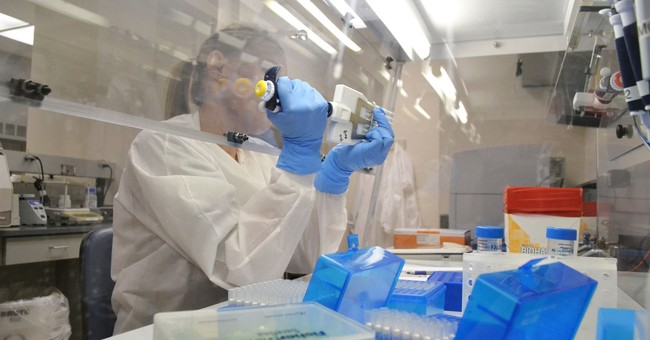 In this April 12, 2018 photo lab technician extracts DNA for whole genome sequencing at the Colorado Department of Public Health

The Washington Post has reported some good news on the Chinese virus front. Scientists at Johns Hopkins University had feared that COVID-19’s genetic code would mutate rapidly meaning that it would be difficult to create a vaccine that would provide long-lasting immunity.

Joel Achenbach, who covers science at The Washington Post, writes that its genetic code “is not mutating significantly as it circulates through the human population” and “that relative stability suggests the virus is less likely to become more or less dangerous as it spreads.” He explains:

All viruses evolve over time, accumulating mutations as they replicate imperfectly inside a host’s cells in tremendous numbers and then spread through a population, with some of those mutations persisting through natural selection. The new coronavirus has proofreading machinery, however, and that reduces the “error rate” and the pace of mutation. It looks pretty much the same everywhere it has appeared, the scientists say, and there is no evidence that some strains are deadlier than others.

SARS-CoV-2, the virus that causes the disease covid-19, is similar to coronaviruses that circulate naturally in bats. It jumped into the human species last year in Wuhan, China, probably through an intermediate species — possibly a pangolin, an endangered anteater whose scales are trafficked for traditional medicine.

Achenbach spoke to Johns Hopkins University Applied Physics Laboratory molecular geneticist Peter Thielen who said his team has studied 1,000 samples of the virus. They found “there are only about four to 10 genetic differences between the strains that have infected people in the United States and the original virus that spread in Wuhan.”

Thielen explained, “That’s a relatively small number of mutations for having passed through a large number of people. At this point, the mutation rate of the virus would suggest that the vaccine developed for SARS-CoV-2 would be a single vaccine, rather than a new vaccine every year like the flu vaccine.”

Achenbach spoke to two other virologists, Stanley Perlman of the University of Iowa and Benjamin Neuman of Texas A&M University at Texarkana, who confirmed Thielen’s opinion that “the virus appears relatively stable.”

“The virus has not mutated to any significant extent,” Perlman said.

Just one ‘pretty bad’ strain for everybody so far. If it’s still around in a year, by that point we might have some diversity.

Flu does have one trick up its sleeve that coronaviruses do not have — the flu virus genome is broken up into several segments, each of which codes for a gene. When two flu viruses are in the same cell, they can swap some segments, potentially creating a new combination instantly — this is how the H1N1 ‘swine’ flu originated.

According to the BBC, there are currently more than 20 vaccines against COVID-19 in development, noting that one, in particular, has just begun clinical trials in humans, skipping the typical animal research phase.

Last week, it was reported that Kaiser Permanente Washington Health Research Institute (KPWHRI) in Seattle was starting a phase 1 clinical trial. A press release on the National Institute of Health’s (NIH) website said:

The National Institute of Allergy and Infectious Diseases (NIAID), part of the NIH, is funding the trial. KPWHRI is part of NIAID’s Infectious Diseases Clinical Research Consortium. The open-label trial will enroll 45 healthy adult volunteers ages 18 to 55 years over approximately 6 weeks. The first participant received the investigational vaccine today.

The study is evaluating different doses of the experimental vaccine for safety and its ability to induce an immune response in participants. This is the first of multiple steps in the clinical trial process for evaluating the potential benefit of the vaccine.

The vaccine is called mRNA-1273 and was developed by NIAID scientists and their collaborators at the biotechnology company Moderna, Inc., based in Cambridge, Massachusetts.