Trump Nominates Rep. Ratcliffe to be the Director of National Intelligence Again, Here's What's Different this Time Around 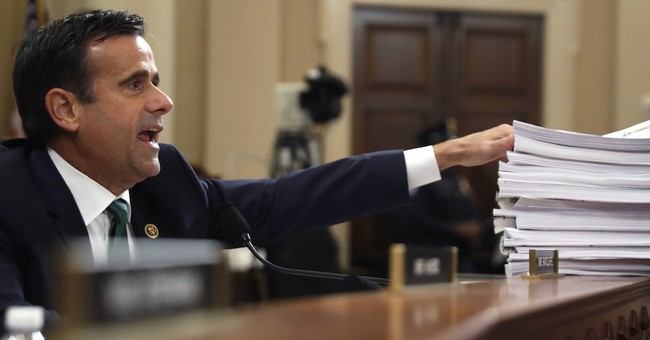 Rep. John Ratcliffe, R-Texas, puts his hand on a stack of committee depositions as he questions Jennifer Williams, an aide to Vice President Mike Pence, and National Security Council aide Lt. Col. Alexander Vindman, as they testify before the House Intelligence Committee on Capitol Hill in Washington, Tuesday, Nov. 19, 2019, during a public impeachment hearing of President Donald Trump’s efforts to tie U.S. aid for Ukraine to investigations of his political opponents. (AP Photo/Andrew Harnik)

It took Democrats about a nanosecond to spring into action against Trump’s nominee for the newly open Director of National Intelligence (DNI) position last summer, Rep. John Ratcliffe (R-TX).

The President’s announcement sent waves of panic throughout the intelligence community and the Washington establishment and immediately, an all-out media assault began against the candidate. Democrats and even some Republicans expressed reservations about Ratcliffe’s lack of national security experience, but the primary concern appeared to be his partisanship, or more specifically, his loyalty to the President.

At the time, CNN, citing “two White House officials and sources familiar with the process,” wrote that Republican senators “have made their views known” about Ratcliffe. One said, “The nomination was greeted with a distinct lack of enthusiasm. The Senators don’t know Congressman Ratcliffe, and none of them seemed eager to champion his nomination.” Others told CNN they “had reservations about whether Ratcliffe was the right person for the job and were raising questions about whether he could be confirmed.”

The New York Times sent out a rather audacious and tone-deaf tweet which said: “Former officials have expressed concern that Representative John Ratcliffe, President Trump’s pick to serve as director of national intelligence, will politicize what is supposed to be a nonpartisan job.”

Too partisan? May I remind them that James Clapper, the king of partisanship, served as the DNI under Obama? And that Obama’s CIA Director, John Brennan, is a subject of interest in U.S. Attorney John Durham’s criminal investigation?

Is there a rule which says Democratic presidents can nominate partisans, but Republicans must choose nonpartisans? Are there any nonpartisans in Washington?

John Ratcliffe, by one measure the second most conservative member of Congress, appears to believe that the Russia investigation was cooked up by Democrats who “committed crimes.” Now Trump reportedly is considering placing atop the US intelligence community.

Sen. Mark Warner (D-VA), vice chairman of the Senate Intelligence Committee, told CNN “The President should take this opportunity to nominate a DNI in the mold of Dan Coats: someone with a deep knowledge of the intelligence community, respect for the hard work intelligence professionals do to keep us safe, and the independence and integrity to speak truth to power when necessary.”

In other words, someone the Democrats would be able to influence. A weak Republican, a RINO like Sen. Richard Burr (R-NC) or a weakling, like former Attorney General Jeff Sessions.

Anyway, the Democrats “vowed to stop Ratcliffe from being confirmed.” President Trump had announced Ratcliffe’s nomination on July 26, 2019 and, after the media circus, withdrew it one week later.

It needs emphasizing that, as far as media meltdowns go, the attack on Rep. Ratcliffe was more severe than most. This may have been because of Ratcliffe’s detailed knowledge of the players involved and the events that unfolded throughout the years of the deep state’s Russian collusion hoax.

What else was happening at that time?

Quietly, behind the scenes, Adam Schiff was coordinating his next assault on the President.

The day before President Trump nominated Ratcliffe, July 25, he’d had a conversation with Ukrainian President Volodymyr Zellensky. Future impeachment inquiry star witness Lt. Col. Alexander Vindman was “so concerned” about it that he passed along the readout from the call to several others. He admitted sharing it with his brother, Yegnevy, who worked at the National Security Council with him, but would not specify who else he had told.

It is believed he shared it with the alleged whistleblower, Eric Ciaramella, who filed his complaint with IC Inspector General Michael Atkinson on August 12.

Dan Bongino speculated during a November podcast (Episode 1102) about why the scrutiny of Ratcliffe may have been so intense. One of his sources “deep within the NSC,” said the swamp made it clear that Ratcliffe would never be confirmed by the Senate.

Bongino explains Democrats knew that, if Ratcliffe were to become the DNI, their planned Ukrainian hoax “wouldn’t fly,” because Ratcliffe would recognize it as false. Once he was no longer a threat, they were able to proceed with it.. “They initiated the false narrative because Ratcliffe won’t be there to shut it down…”

“The same scammers, Schiff, Burr, all the people involved in the spying operation on the President, were involved heavily in the Mueller probe as well…Ukrainegate is the exact same players,” he told his listeners.

Bongino’s main point is that all of these people are connected. The same people who brought us Spygate were birthing the newest hoax at the time, Whistleblowergate.

On Friday, President Trump nominated Ratcliffe for the second time to the DNI position. In a tweet, he wrote: “I am pleased to announce the nomination of @RepRatcliffe (Congressman John Ratcliffe) to be Director of National Intelligence (DNI). Would have completed process earlier, but John wanted to wait until after IG Report was finished. John is an outstanding man of great talent!”

Does he stand a better chance of being confirmed by the Senate this time around? Are there any indications the media reaction will be different?

The announcement hasn’t triggered quite the reaction it did last summer. But last summer, the Coronavirus wasn’t a threat, nor was the U.S. in the thick of the Democratic primaries.

Will the December release of the IG report which confirmed FISA abuse and so much more make a difference as the President suggests?

According to CNN, “two people close to the situation said the White House believes Ratcliffe can be confirmed this time around. One theory floating around is that their case may have been bolstered by the temporary pick of Grenell as acting director — because he’s seen as such a provocative figure, they think senators may be more amenable to Ratcliffe in the role now.”

A White House official told CNN, “We are hopeful that changed circumstances will lead to confirmation, but we plan to fight for every vote.”

Sen. Burr, Chairman of the Senate Intelligence Committee, a Republican who can’t always be counted on, issued a statement on the Ratcliffe pick on Friday night:

The work our Intelligence Community does is vital for ensuring America’s safety, security, and success. I’ve appreciated the dedication and skill the men and women of the Office of the Director of National Intelligence have shown over the last several months during a period of transition. As I’ve said before, however, there is no substitute for having a permanent, Senate-confirmed Director of National Intelligence in place to lead our IC. I look forward to receiving Congressman Ratcliffe’s official nomination and ushering it through the Senate’s regular order.

Democrats, of course, remain adamantly opposed to Ratcliffe. But probably no more so than they would be to any other Trump nominee. Senate Minority Leader Chuck Schumer said,

Replacing one highly partisan operative with another does nothing to keep our country safe. At a time when the Russians are interfering in our elections, we need a nonpartisan leader at the helm of the Intelligence Community who sees the world objectively and speaks truth to power, and unfortunately neither Acting Director Grenell nor Rep. Ratcliffe comes even close to that. With this nomination, President Trump has shown once again his lack of respect for the rule of law and the intelligence community. Republicans must join Democrats in swiftly rejecting the nomination of Mr. Ratcliffe.

House Speaker Nancy Pelosi echoed Schumer’s remarks. “Intelligence should never be guided by partisanship or politics. Unfortunately, Congressman Ratcliffe has shown an unacceptable embrace of conspiracy theories and a clear disrespect and distrust of our law enforcement and intelligence patriots that disqualify him from leading America’s intelligence community.”

Chuck and Nancy need to be reminded of two facts.

1. Those “conspiracies” were confirmed as facts by a left-leaning inspector general in December.
2. Both Clapper and Brennan are persons of interest in an ongoing criminal investigation.

Considering the importance of this position and John Ratcliffe’s fierce loyalty to the President, his senate confirmation process has the potential to reach Kavanaughesque proportions. Brace yourselves.

These Are the States Where Abortion Is Now Banned
Townhall
Libs turn on Rep. Clyburn over lackluster response to overturning of Roe
Twitchy
Jonathan Turley Dropkicks the Attacks From Pelosi, Biden and AOC Over SCOTUS Decision
Redstate
Justice Thomas Calls for End to Legislating from the Bench, Drives the Left Even Crazier
PJ Media