Fasten Your Seatbelts ABC! Project Veritas Will be Dropping #ExposeABC on Wednesday 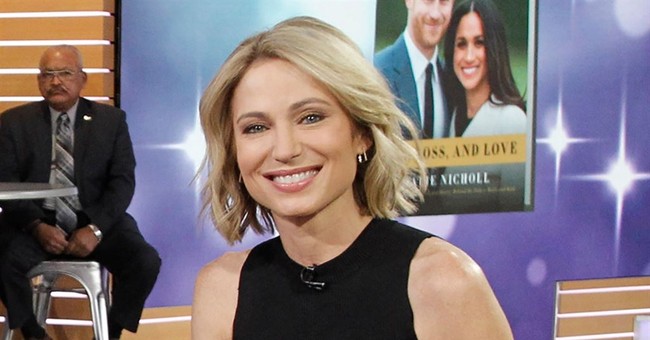 This March 20, 2018 photo released by ABC shows “Good Morning America” co-host Amy Robach on the set in New York. ABC News says Robach will be David Muir’s new co-anchor on the “20/20” newsmagazine. Robach has reported for the newsmagazine and is best known for her work on “Good Morning America,” where in recent years she has detailed her own battle with breast cancer. ABC News President James Goldston said Monday that Robach will continue to report for the morning show. (Lou Rocco/ABC via AP)

Project Veritas founder James O’Keefe, the self described guerrilla journalist, has given us a heads up about his plans to post a video that “will expose ABC News’ agenda to mislead voters and push their own narratives.”

He adds, “you aren’t going to want to miss it.”

Not long ago we exposed the #EpsteinCoverup within @ABC.

Tomorrow, @Project_Veritas will expose ABC News’ agenda to mislead voters and push their own narratives.

You aren’t going to want to miss it.

The last time the O’Keefe team targeted ABC was in November 2019. And it was spectacular. They had a recording of “Good Morning America” co-anchor Amy Robach talking to a producer on a “hot mic” about how frustrated she’d been three years earlier when the network quashed an interview she had done with one of Jeffrey Epstein’s alleged victims. Robach is heard saying, “We had Clinton, we had everything.”

Network brass said to her, “Who is Jeffrey Epstein. No one knows who that is. This is a stupid story…Um, then the Palace [as in Buckingham] found out that we had her whole allegations about Prince Andrew and threatened us a million different ways…She told me everything, she had pictures, she had everything. She was in hiding for twelve years. We convinced her to come out.”

That was a pretty amazing get for James O’Keefe.

Last month, Project Veritas took aim at members of Bernie Sanders’ campaign, a rather unsavory bunch of individuals. You may recall a conversation between an undercover reporter and a Bernie aide named Kyle Jurek. The reporter asks, “Do you even think that some of these like MAGA people could be re-educated?”

Jurek’s  answers were the stuff of Trump campaign ads:

I mean, we gotta try. Like, in Nazi Germany after the fall of the Nazi party there was a sh** ton of the populace that was f***ing Nazified. Germany had to spend billions of dollars re-educating their f***ing people to not be Nazis…

Like, we’re probably going to have to do the same f***ing thing here. That’s kind of what Bernie’s f***ing like, ‘Hey, free education for everybody!’ because we’re going to have to teach you to not be a f***ing Nazi…

If Bernie doesn’t get the nomination or it goes to a second round at the DNC convention, f***ing Milwaukee will burn. It’ll start in Milwaukee and then when they f***ing, when the police push back on that, other cities will just f***ing (blow up sound).

Greatest way to breaking a f***ing billionaire of their like privilege and the idea that they’re superior, go out and break rocks for 12 hours a day. You’re now a working-class person and you’re going to f***ing learn what that means, right?

BREAKING: @BernieSanders “free education” policies to “teach you how to not be a f**king nazi.”; 'There is a reason Stalin had Gulags'; 'Expect violent reaction' for speech. If Bernie doesn't get nomination "Milwaukee will burn"

In a separate clip, Jurek returns and tells the reporter he’s “an Anarcho-communist.”

I’m as far to left as you can possibly get. In fact, there are, that I know of, one, two, three, four of the organizers in this office are leftists, Justin, me, Derek, Daniele, Jessica are all definitely further left than the Democratic socialists.

There’s a lot of me’s in the Sanders campaign.

That was a fascinating expose, but O’Keefe has also had some misses. Before leaving a Washington, D.C. stage in October, he told his audience:

We have one announcement to make real quick. Because of what Eric [a previous insider who worked on a PV project] did, another person came to us. We’re proud to announce the next insider who will blow the whistle. He’s been recording for months, all of his colleagues, his bosses, his senior people. This may be the biggest story Project Veritas has ever broke. Next week, the next insider to blow the whistle on the next organization … is within CNN.

Although #ExposeCNN was mildly interesting, it fell well short of blockbuster territory.