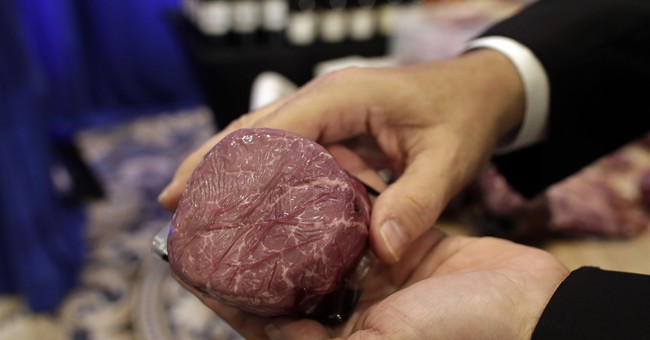 A few days ago, some of the usual suspects were debating the finer points of something or another I had asserted in one of my posts. As always, the comments section hosted a lively exchange of views. It was a spirited yet friendly conversation, then things turned ugly. But, before I go there, some background.

I am a steak snob. Since I traded in a lung for the opportunity to escape the Army, I’ve taken up cooking as a hobby…along with an extra 40 pounds. Although I occasionally branch out and try to create something upscale, like say a Beef Wellington, most of my efforts have been concentrated on ribs (beef and pork), smoked brisket and of course, the perfect steak. There’s also a side project I have going on that is a line of effort in and of itself, designing and building the perfect hamburger…but that’s another story.

Back to steak. Did I mention that I am a steak snob? Some of the first things I learned: The better quality of meat you have, the less you have to cook it; A perfect steak should be cooked no more than medium-rare…max; And finally, never, ever sully a perfectly good piece of American Cow (except a burger) with ketchup. Only a real heathen would eat his steak well done, while also slathering it in thickened tomato sauce.

Then comes Candidate Donald J. Trump who does just that. I hear tell that his steak is cooked so far past well done, that it actually rattles on the plate. Needless to say, he also adds insult to injury by drowning it in ketchup…a real deal-breaker as far as I was concerned. I couldn’t bring myself to vote for him in the primary.

Proving the chattering class impotent and incompetent, Donald Trump won the Republican Primary. I was then faced with a huge ethical dilemma. On one hand, I could maintain my standards, thus effectively handing a vote to Hillary Clinton. On the other hand, I could swallow my pride and do what was best for the nation. I finally did so, as did sufficient other folks so as to flog the fat fundament of the criminal crone from Chappaqua.

Donald Trump has not only saved us from the clutches of a Clinton presidency, but he, in most cases, has governed fairly conservatively. Because of that, I decided to do something I never thought I would. I decided to issue a waiver on the criminally carnivorous cooking of red meat…steaks by charring them so badly that they can be used as plates in and of themselves. I call it the President Donald J. Trump waiver. It is in effect until President Trump’s replacement is sworn in, January 2025.

Which brings us to the “conversation” in the comments section. I’ve included it herein for your pleasure.

In short, one of my favorite commenters, and a reliable source for business information given our current trade issues, let slip a tremendous character flaw….he likes to put ketchup on his steak (no mention of how he likes it cooked). Not only does he put rancid tomato sauce on his steak, but he had the effrontery to call those of us who don’t, “hedgehogs,” and….and…..”VEGANS!”

Of course, my immediate thought was to send some malware to his computer that would not only keep him off of RedState, but would show continuous loops of Hillary Clinton cackling. Then I remembered the waiver and I calmed down a bit.

So, here is what I’ve decided. The President Donald J. Trump Steak Waiver remains in full effect until January 2025, whereupon there might be the possibility of an extension, as long as we don’t elect another Reagan successor such as Bush ‘41. So until then Colonel Race, chow down.