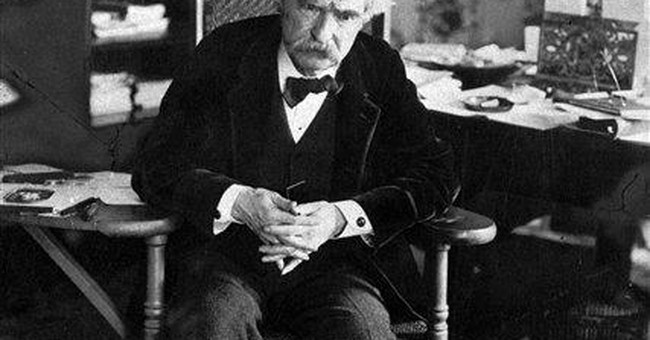 Way back in the day, there was a feller named Clemens who undertook to be a writer by the name of Mark Twain. He wrote a number of tracts, articles, books and learned papers…always providing some bit of wisdom along with a dash of wit. One of my favorites is called, “Tom Whitewashes the Fence,” a chapter in the longer book, “The Adventures of Tom Sawyer.” In this particular chapter, the hero, Tom, has been assigned the onerous task of whitewashing Aunt Polly’s fence…on a Saturday afternoon of all indignities.

Tom, being an all American boy, especially adaptable to sudden exposure to adverse circumstances and novel approaches to wiggling out of them, hits upon a truly ingenious way to escape his enforced servitude. He decides to con his friends into working for him, by getting them to want to do what he does not. His first victim is his buddy, Ben. After a brief conversation, Tom manages to get Ben, who was heretofore enjoying his day off pretending to be a Mississippi riverboat and crew (playing all the parts himself) to trade Tom his apple for the “privilege” of whitewashing the fence. (Note: I’ve broken this up a bit for readability and with no disrespect meant for Mr. Clemens.)

Tom gave up the brush with reluctance in his face, but alacrity in his heart. And while the late steamer Big Missouri [Ben] worked and sweated in the sun, the retired artist sat on a barrel in the shade close by, dangled his legs, munched his apple, and planned the slaughter of more innocents. There was no lack of material; boys happened along every little while; they came to jeer, but remained to whitewash.

By the time Ben was fagged out, Tom had traded the next chance to Billy Fisher for a kite, in good repair; and when he played out, Johnny Miller bought in for a dead rat and a string to swing it with—and so on, and so on, hour after hour. And when the middle of the afternoon came, from being a poor poverty-stricken boy in the morning, Tom was literally rolling in wealth.

He had beside the things before mentioned, twelve marbles, part of a Jew’s harp, a piece of blue bottle-glass to look through, a spool cannon, a key that wouldn’t unlock anything, a fragment of chalk, a glass stopper of a decanter, a tin soldier, a couple of tadpoles, six firecrackers, a kitten with only one eye, a brass doorknob, a dog collar—but no dog—the handle of a knife, four pieces of orange peel, and a dilapidated old window sash.

He had had a nice, good, idle time all the while—plenty of company—and the fence had three coats of whitewash on it! If he hadn’t run out of whitewash, he would have bankrupted every boy in the village.

Tom said to himself that it was not such a hollow world, after all. He had discovered a great law of human action, without knowing it—namely, that in order to make a man or a boy covet a thing, it is only necessary to make the thing difficult to attain.

President Trump has managed to effectuate his own analog of this situation. Not even a week ago, the left was screeching to the high heavens about states that had not yet implemented unconstitutional “lockdowns” of their citizens. My colleague and good friend, Sister Toldjah wrote about this. Short version, the left wanted the President to force those holdout states to adopt “lockdown” measures. He pushed back citing Constitutional issues. And the fight was on.

Now, President Trump is embroiled with the left again, this time on the opposite side of the argument. He has stated that he is the final word on reopening the country/economy. (For the record, I have some issues with this, but that’s for another day). The governors, particularly noted DEMOCRAT governors such as New York’s Cuomo, have pushed back citing…please sit down folks…States’ Rights.

The leftist press has joined right in with them, apparently seeing a weak spot they could attack after the video drubbing President Trump gave them during Monday evening’s China Virus Briefing. As I write this, I’m watching Juan Williams, FOX News’s token leftist, wax poetic about the wonders of the 10th Amendment. Will wonders never cease?

So, let’s recap. Not even a week ago, the left was after President Trump for not being a tyrant and clamping down on non-compliant states. Today, we have Democrat governors, legislators, and even their media enablers advocating for States’ Rights. Hold that thought.

There’s another aside to this. No matter when President Trump decides to “open the U.S. Economy,” he will get heat. After he makes said decision, the very first — and every subsequent — fatality will be his fault, according to the leftists and trumpeted loudly and long. Unless of course, any of those decisions are made by governors, Democrat governors. Then, they will be ignored.

I’m not sure whether or not President Trump purposely engineered this particular situation. What I am pretty sure of, is that the Democrat governors and the leftist press, are both busily whitewashing Aunt Polly’s fence, while President Trump is eating Ben’s apple and walking home with the cumulative treasures of every boy in town.