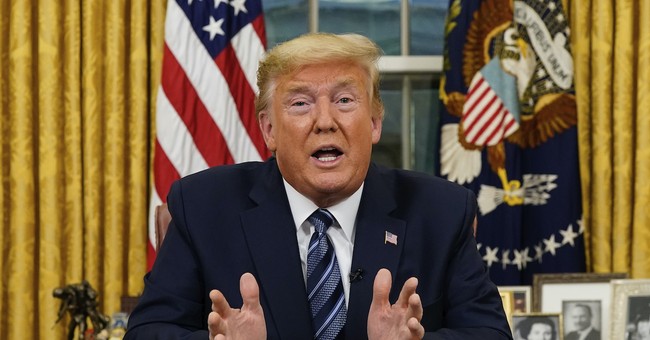 President Donald Trump speaks in an address to the nation from the Oval Office at the White House about the coronavirus Wednesday, March, 11, 2020, in Washington. (Doug Mills/The New York Times via AP, Pool)

According to Bloomberg.Com, President Trump plans to declare a State of National Emergency in a news conference slated for 3:00 PM in Washington D.C. From the article:

President Donald Trump plans to declare a national emergency on Friday over the coronavirus outbreak, invoking the Stafford Act to open the door to more federal aid for states and municipalities, according to two people familiar with the matter.

The president said he will hold a news conference at 3 p.m. in Washington. Trump spoke Friday with Emmanuel Macron, the French president tweeted, about the pandemic, and agreed to organize a video conference with world leaders on Monday to coordinate research efforts on a vaccine and treatments and work on how to respond to the economic fallout.

Such a declaration will, of course, open the door to some additional authorities and funding for the Executive Branch to combat the Coronavirus. The downside to all of this will likely be some additional panic amongst the American public. Stay tuned for more analysis.

What do YOU think the result of all this will be? Is there something going on that we don’t know about? Let me know below in the comments.