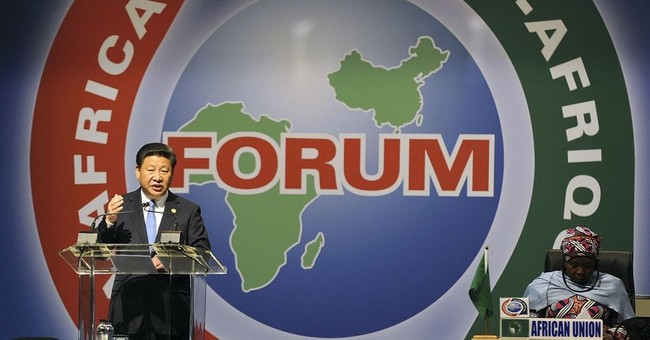 FILE – In this Dec. 4, 2015 file photo, Chinese President Xi Jinping, left, delivers his speech during the opening ceremony of the Johannesburg Summit for the Forum on China-Africa Cooperation at the Sandton Convention Centre in Johannesburg. A new report says on Wednesday, Oct. 11, 2017, China is closing to matching the United States as a top global source of official grants and loans to developing countries. But it says much of Beijing’s financing serves its own economic interests and produces little growth for recipients. (AP Photo, File)

The timing could not have been more consequential. When COVID-19 left China and exported itself to dozens of other countries, it became a stark reminder of the challenge of open borders—and the challenge of a rising China.

This is particularly true and poignant in Cameroon and other countries in Africa. For years, the Chinese have been courting and investing in Africa. They’ve helped African countries run up huge debts, with the interest payments still to come.

They’ve built Chinese-langauge schools, and by all accounts, packed African countries with Chinese informants and operatives. Under the guise of “infrastructure” and “development,” they have made the case that they—not the US—are the superpower to befriend for the century ahead.

COVID-19 is an important break, and one the US should use as an opportunity. Consider: How many African leaders are now going to want to drape their arms around their Chinese equivalents?

The answer: very few. Cameroon, South African, Senegal, Nigeria, Tunisia, Morocco, Egypt and Sudan have all confirmed cases of COVID-19, and both the numbers of countries and the number of infected individuals is set to rise. When those numbers go up, China’s stock in Africa will plummet.

This is an historic opportunity for the United States to step up, show leadership, and build the kinds of bil-lateral ties that have held our country in good stead for generations.

It was just weeks ago that the Secretary of Defense announced plans to potentially draw down America’s presence in Cameroon and others of what is known as the Sahel region.

He was quickly and roundly criticized by members of the US Congress—including several influential and powerful Republican senators, who took a member of their own party to task for the mere suggestion of the US pulling out of Africa.

Now, the case those Republican Senators were making is even more clear: US leadership—economic, military, geopolitical—is more important in that part of the world than ever.

When and if the Chinese have to pull back their efforts, the US can step in. We can increase the number of troops we have in the region. We can better patrol the waterways.

Without COVID-19, it is quite possible that China would have continued its not-so-subtle efforts to grow its role in Africa. But COVID-19 arrived when it did, and it gives the US a remarkable opportunity to turn the tables in Africa.

It is unfortunate, of course, that the virus is the cause—but it’s precisely at these moments of international peril that the US can do what it has always done: provide a clarion call of moral leadership and strength, and shape the world for the better of the American people and all people.

There was a time a year ago when people in Africa were referring to the Chinese century ahead, to the seemingly endless possibilities of cheap Chinese goods and labor flooding the African market and to the great things Chinese leaders could do to help Africa.

In just months, that rhetoric has changed. China—and whatever it sends abroad—is now something to be feared and checked. And it is because of this shift in attitudes that the US should shift its own posture, and embrace Africa as it never has before.