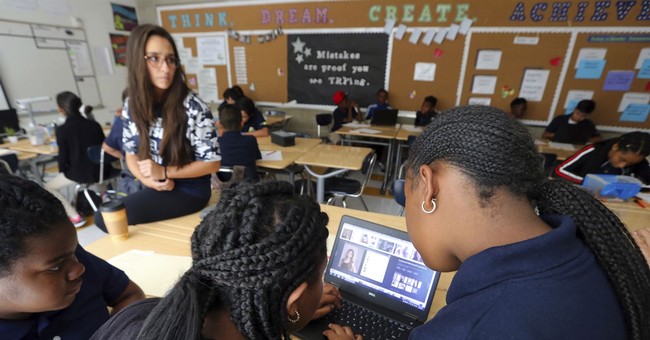 In this Friday, July 13, 2018 photo, students work on an anti-bullying campaign as reacher Ashley Smith watches at Ánimo Westside Charter Middle School during a summer session to introduce new students to the school they will attend in the fall, in the Playa Del Rey area of Los Angeles. Animo is one of many schools to benefit from donations by billionaires that are influencing state education policy by giving money to state-level charter support organizations to sustain, defend and expand the charter schools movement across the country. (AP Photo/Reed Saxon)

As Bernie Sanders and his supporters drive the Democratic Party more and more to the socialist left, I find very little common ground with them on any of the issues.

Surprisingly, there is one candidate who shares my views for the drastic need for educational reform in America.

On Wednesday outside of Al Sharpton’s National Action Network prayer breakfast in North Charleston, long shot presidential candidate Tom Steyer expressed his support to me for charter schools and vouchers.

I personally believe all these candidates should answer the question on why they take money from organizations who waste teachers’ dues on lavish spending and on abortion-providing organizations.

That is not a popular position within the Democratic Party and with the morally corrupt teacher’s unions who have given millions of dollars over the years to the DNC and to Democratic candidates.

The American Federation of Teachers and the National Education Association claim to support teachers and our students, however, records show the organizations have spent teacher member dues supporting abortion-providing organizations like Planned Parenthood.

Planned Parenthood, or Klan Parenthood as I like to call them, strategically places abortion clinics in African American neighborhoods.

As a result, abortion rates for black women are four times higher than that of white women.

In my opinion, the AFT and NEA have done more to increase abortion in minority communities than they have to promote good teachers and schools.

While they are contributing towards the higher abortion rates of African American children, the national teacher unions are simultaneously standing in the way of school choice and education reforms.

Abortion is killing our children. And now we find out that teacher unions are using teacher member dues – hard-working teachers’ money – to fund this horrible atrocity.

I’m personally calling on the Democratic presidential candidates, who take money and support from the national teacher unions, to condemn their practices of using teacher member dues on lavish spending and abortion clinics and start doing more for our kids.