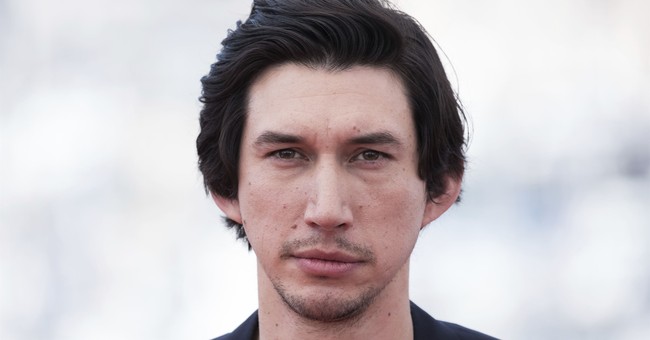 Actor Adam Driver poses for photographers during a photo call for the film ‘The Man Who Killed Don Quixote’ at the 71st international film festival, Cannes, southern France, Saturday, May 19, 2018. (Photo by Vianney Le Caer/Invision/AP)

I like Adam Driver. His acting prowess makes his likability factor pretty high, but what drives it up even higher is the fact that he’s one of the few self-aware A-list celebrities in Hollywood who understand that he lives a pretty privileged life. Also, he served as a marine in the United States armed forces and he’s pretty proud of that fact.

It’s that military service that recently earned him the ire of the internet outrage mob who attempted to cancel Driver after a 2015 interview with NPR and a 2019 New Yorker story came to the surface. In both stories, Driver tells of watching 9/11 happen and joined with the marines out of a sense of patriotism and desire for “retribution.”

“After 9/11, he found himself filled with a desire for retribution, although he wasn’t sure against what or whom,” the interview reads. “‘It wasn’t against Muslims,’ [Driver] said. ‘It was: We were attacked. I want to fight for my country against whoever that is,” reads the New Yorker story.

This caused internet denizens to fly into a rage and claim that Driver is Islamophobic and started the hashtag #AdamDriverIsOverParty.

However, despite the outrage brigade’s best efforts to smear a patriotic man who fought for his country as a bigot, the rest of the internet came to Driver’s defense. As of this writing, the social justice warriors who attempted to get Driver canceled have been drowned out by people moving to his defense and expressing appreciation for his service.

#adamdriverisoverparty So apparently being patriotic and wanting to defend your country gets you canceled now. Sorry Steve Rogers your'e an istaphobe bigot!!! pic.twitter.com/HZGgUh7GQI

Adam Driver wanted to join the Marines after 9/11 so that he could fight for his country. Now a bunch of Fart-Sniffers on Twitter want to cancel him. I couldn't make this stuff up.#AdamDriverIsOverParty pic.twitter.com/5wzZB9bfSj

Are people really THAT BORED to try and cancel probably the most unproblematic celebrity there is? Try to cancel someone who joined the Marines bc he wanted to serve his country after a tragedy? Y’all REALLY messed with the wrong fandom #adamdriverisoverparty pic.twitter.com/Nfyztgpdl0

Okay this whole #AdamDriverIsOverParty is so dumb. Apparently joining the military after 9/11 because he wanted to be patriotic and fight for his country when it was in need. How on fucking earth does that make him Racist or an islamophobe?? Cancel Culture is fucking disgusting. pic.twitter.com/nbr4kknbZd

heard someone say "since Adam joined just to fight terrorism then he's against Muslims" isn't that kinda islamaphobic of you to assume terrorism is directly related to Islam 😐 #adamdriverisoverparty pic.twitter.com/XkfI1HP3dq

Adam Driver served, risked life&limb for y’all and this is the thanks he gets? He literally said,“It WASN’T against Muslims. We were ATTACKED. I wanted to fight for my country against WHOEVER that is.” It was post-9/11. He’s CLEARLY referring to TERRORISTS. #adamdriverisoverparty pic.twitter.com/jERwzENwv1

Apparently, it’s possible to get so woke you fall asleep at the wheel of your own common sense.

Driver is one of the few in Hollywood who doesn’t make his politics a part of his persona, and he seems to be one of the few who actually gets that his politics aren’t anything he needs to be open about. During the Golden Globes, Driver was one of the few people who applauded when Ricky Gervais told the celebrities to shut up about their stances on various topics and that they have no right to tell everyone else what to think or how to live.

What’s more, Driver made it very clear that he didn’t join up to hurt Muslims. He did it because we were attacked and he wanted to defend his friends, his family, and his country. That means us.

He’s the person least deserving of derision. Social justice warriors don’t really seem to care about what people do or don’t deserve, however. All they know is that Driver shot at people who aren’t white and that’s enough for them.